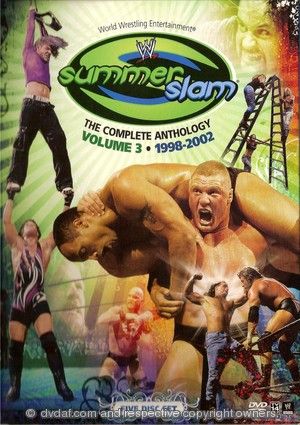 ~MATCH #1~
European Champion D’Lo Brown defeats Val Venis by disqualification at 15:24. D’Lo has been the Champion since 7.20.98, and this is his fourth defense. These two mid-card stalwarts go back and forth, while newcomer Edge is shown watching from the crowd. Brown focuses on Venis’ back, even using a Texas Cloverleaf. Venis fights back and goes for the Money Shot but Brown gets his knees up. Brown then sets Venis up for the Liger Bomb and almost breaks his neck. He goes up and tries the ‘Lo Down but Venis moves out of the way. Venis fights up and removes Brown’s chest protector and the referee won’t get out of his way so Venis shoves him down. That’s a disqualification win for the Champion. That was an okay match with an absolute garbage finish.
Rating: **¼

~MATCH #2~
The Oddities (Kurrgan, Golga & Giant Silva) (w/ Luna, Shaggy 2 Dope & Violent J) defeat Kai En Tai (Dick Togo, Mens Teoih, Sho Funaki & Taka Michinoku) (w/ Yamaguchi-San) in a handicap match at 10:10. They try for some comedy while the Oddities throw their much smaller opponents around the ring. Yamaguchi-San tries to interfere and Luna thwarts him. Kurrgan and Silva hit simultaneous double chokeslams on all four of their opponents, and then Golga covers everyone to get the pin. I guess this gives the card variety, but it was a bad, bad match.
Rating: ½*

~MATCH #3~
X-Pac (w/ Howard Finkel) defeats Jeff Jarrett (w/ Southern Justice (Mark Canterbury & Dennis Knight)) at 11:11 in a Hair Vs. Hair match. Jarrett attacks before the bell and takes the early advantage. That’s pretty much how this one goes, save for the usual X-Pac hope spots. Late in the match, Knight tries to give Jarrett a guitar but it backfires and X-Pac uses the weapon to smash on Jarrett’s head. That’s enough for X-Pac to get the pin. The New Age Outlaws come out to make sure Jarrett will get his head shaved. The Headbangers and Darren Drozdov also come out to make sure the haircut happens. Good match with a good amount of heat thanks to the stipulation.
Rating: ***¼

~MATCH #4~
Edge & Sable defeat Marc Mero & Jacqueline at 8:26 in a Mixed Tag Team match. This is the first pay-per-view match for Edge, who was not at all established as anything at this point. The men start it off as Jacqueline is afraid of Sable but not afraid to interfere on Edge. Once Sable gets the hot tag she’s a house afire on both Mero and Jacqueline. Sable and Edge have little problem doing what they want, as Mero and Jacqueline have to cheat like crazy to get anything done. Late in the match Mero gets Edge on the ground and he goes up top. Edge kicks him down right on his crotch. Sable tags in and delivers a super hurricanrana! Jacqueline tries to come in for the save it backfires big-time. While Sable gets rid of Jacqueline, Edge hits Mero with the Downward Spiral. Edge then wheelbarrows Sable and drops her on top of Mero for the pin. Short, and mostly pointless, but not bad or anything. Edge looked really good for how green he was.
Rating: **¾

~MATCH #5~
Ken Shamrock defeats Owen Hart (w/ Dan Severn) in a Lion’s Den match at 9:16. This is an interesting environment, if nothing else. They mix brawling with mat wrestling in the early going. Owen figures out how to use the cage walls to his advantage first, but Shamrock comes up with some creative maneuvering as well. In the end, Shamrock counters a Dragon Sleeper by walking up the cage and slapping on a Fujiwara Ambar, which he turns into the Ankle Lock! Severn bails and Owen taps out. Not a technical classic or anything, but a good bit of something different, and a memorable match.
Rating: ***

~MATCH #6~
The New Age Outlaws (Road Dogg & Billy Gunn) defeat World Tag Team Champion Mankind at 5:16 in a No Holds Barred Falls Count Anywhere Handicap Match to win the titles. Mankind has been the Champion (along with Kane) since 8.10.98, and this is his/their second defense. He attacks the Outlaws right away and does the best he can to fight off both men. The numbers game eventually overcomes, and the Outlaws take control. After taking a hellacious beating, the Outlaws hit a Spiked Piledriver on one of the tag title belts to get the pin. Mankind looks tough as nails but obviously this wasn’t much of a contest.
Rating: *

~MATCH #7~
Triple H (w/ Chyna) defeats Intercontinental Champion The Rock (w/ Mark Henry) at 26:01 in a Ladder Match to win the title. Rock has been the Champion since 12.8.97, and this is his eleventh defense. These two have had a long rivalry and this is a fitting culmination for the Intercontinental Title. They waste no time taking it to each other, brawling both in and out of the ring. It doesn’t take long for the ladder to get involved, and Rock uses it the most. Rock targets HHH’s knee, even trapping it between the rungs of the ladder and bashing it with a steel chair. HHH fights back and eventually bloodies the Rock’s face. Henry and Chyna get involved where they can, but the spotlight stays where it belongs for the most part. Late in the match HHH is able to hit Rock with a Pedigree, and Henry throws a handful of powder in his eyes! HHH finds his way to the ladder but he cannot see. Rock climbs up as well, and Chyna halts his progress with a low blow! The crowd popped big for that. HHH finds his way to the title and pulls it down to a monster pop. This is a terrific match and a very clear sign that Rock especially was ready to move on to bigger things. HHH more than held up his end here too. This was a well-built feud with a logical and satisfying conclusion. I like stuff like that.
Rating: ****

~MATCH #8~
WWF World Heavyweight Champion Steve Austin defeats The Undertaker at 20:52 to retain the title. Austin has been the Champion since 6.29.98, and this is his first defense. Both men are aggressive in the early going, with plenty of punches being thrown from both sides. Austin gets knocked a little loopy when he kicks Undertaker during a back body drop attempt, and the back of Undertaker’s head cracks Austin right on the chin. Eventually the Champ recovers and goes on offense, and that’s when Kane makes his way out. Before he can interfere, Undertaker tells Kane to leave! That’s just good sportsmanship there. They take the fight outside the ring and battle throughout the crowd. Undertaker gets Austin in position on the Spanish Announce Table and comes flying off the top rope with a guillotine legdrop! That was a much-replayed moment because it’s a cool visual. Back in the ring it only gets two. The back and forth continues until Undertaker goes for Old School. Austin counters with a low blow and hits the Stunner to get the pin. This has some good moments and the crowd is hot so it’s at least entertaining. But it’s really punchy-kicky and there are some really awkward spots. It gets points for feeling like a big money match though.
Rating: ***¼

A2Z Analysiz
The last two matches on the show make this one an easy thumbs-up, but the undercard is a bit of a mixed bag. The dungeon match and hair v hair matches were quality, and the rest was either short or non-offensive. This definitely feels like an Attitude Era show though, so your mileage may vary on the nostalgia factor.