Roman comes out and wants a challenger for the Universal Title in Finn Balor. Finn accepts, but Baron says he never approved this. Angle says it’s okay and then makes Baron face Lashley. Lots of nothing – so the usual for Baron, and he loses to a Yokasuka cutter. Paul Heyman says that Brock wants his contractually-obligated rematch and Brock will go where he wants to go and Angle says the rematch can be whenever he wants. A long Taker-HHH video airs before they hype up Evolution. Ember, Bayley, and Sasha face the Riott Squad. Sasha hits a hard meteora off the apron to Logan, but the Riott kick ends it. 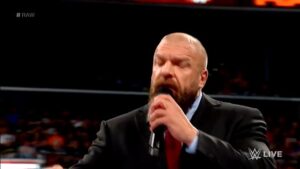 HHH comes out for a big babyface promo. He talks about fearing Taker before, but needing to put an end to their era. Dean faces Dolph, which is pretty good until Drew and Seth brawl. Dolph avoids Dirty Deeds and Seth hits a suicide dive to Drew before landing Dirty Deeds on Dolph to win. Braun tells Balor that if he wins, he’ll have to face him – I have zero issues with that, their matches have been good.

Elias is out to sing but Hawkins interrupts and gets squashed quickly. Titus Worldwide strategizes agaisnt AOP, and Dana largely ignores Titus. AOP destroys Crews with the Last Chapter to no reacion. We get a long Steph promo before Ronda comes in and tells the roster to come into the ring because the roster isn’t below her – they’re all equals. Steph gets armbarred and Ronda celebrates with the roster. Scott Dawson faces Bo Dallas and hits Konnan’s spinebuster setup into a DDT to win. Dash faces Axel and beats him with a Gory special. Alexa and Steph chat with their slings on before Baron buries him too.

Roman vs. Balor features an apron PK that Roman counters with a faceplant. Roman hits the corner lariats, but Balor sends him out and hits the flip dive. Roman avoids the double stomp, but eats a slingblade. Superman punch counters the shotgun dropkick for 2.9! Roman’s spear is met with a punt and a victory roll for 2. Superman punch hits and he goes in the corner – but Braun comes down. Slingblade and the shotgun dropkick hit! Double stomp misses and Roman his the spear to win it! Braun boots Roman and says he’s cashing in!

Seth and Dean come out in the Shield garb and surround the ring. Roman gives Braun a nasty look before he gets jumped by the Shield. They atatck him and do the Shield powerbomb to him through the announce table at ringside. That was fantastic – Roman didn’t quite turn heel, but this is a perfect way to get an edge to him again and show that he’ll do whatever it takes to win and retain the title. Also, since Braun vs. Roman never officially started, Braun still has the case.