Roman saunters to the ring and says he’s here to defend the title and he wants Braun. Braun says if he cashes in tonight, the Shield would save him – so he’ll make him a deal and cash it in at Hell in a Cell where Seth and Dean can’t interfere. Dolph and Drew come out and say they need a new challenge, and it’s them. GM Baron makes it and then makes himself vs. Balor in another match. They have a match that goes on 20 years before Baron hits him with a chair for a DQ. Baron makes a no DQ rematch and wins. Flair, Jarrett, Christian, Foley, and Nash chime in. Only Christian picks HHH. 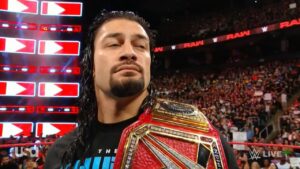 Titus Worldwide meets up and Dana has a tuneup match against Sasha tonight. They have a sloppy match that Sasha wins with the backstabber and Bank Statement. Seth comes out and talks about being proud to be champion, before KO demands a match and gets it. Chinlock and armlock city from KO. KO misses a double-jump moonsault and the stomp ends it. Braun gives Baron the contract for the HIAC main event. Owens quits mid-ring and Renee chats with Drew and Dolph and talk about slaughtering Braun and Roman tonight.

The B-Team and their new crappy theme are out to face the Revival, who destroy them with the shatter machine and will apparently demand a title shot. These belts are absolutely dead right now. Elias sings and insult the Toronto crowd and city until Trish returns! Trish tells Elias to walk..himself to the back. Elias says she knows he wants him, but he doesn’t date women in his 60s! Nattie and Ronda come out before Alexa and Alicia are out to insult Trish. Alexa calls Trish Ms. Irrelevant, and gives a great faux-congrats to Ronda for winning. Nattie beats Alicia with the Sharpshooter and Alexa vs. Ronda is made for HIAC.

We get a giant wacky selfie skit with the Bellas, Nattie, Trish, and Ronda. HBK returns next week and Lashley beats the Ascension like they’re two jobbers and beats Viktor with a Yokosuka cutter. Dean is out looking jacked against Jinder. Dirty Deeds ends it quickly and Jinder’s descent from SD continues. Roman talks smack to Braun about how he won’t be able to win at HIAC. Dolph sells wonderfully for the babyfaces. He’s practically invented for Braun’s pinball style. Braun gets a tag, but he allows them to beat up Roman before he does. Everyone beats up Roman before Dean and Seth come out and get beaten up. They knock them for having an advantage, but after Braun took a 3-on-1 beating, it’s fair.