On this week’s SmackDown LIVE, Princess Mella gets her SmackDown Women’s Title rematch, and The New Day celebrate their fifth Tag Team Championship. Plus, a Tag Team Triple Threat Match with major WWE Hell in a Cell implications. 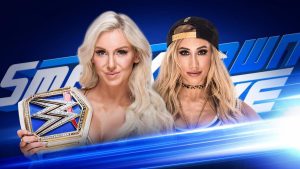 After defeating Carmella and Becky Lynch in a Triple Threat Match to capture the SmackDown Women’s Championship at SummerSlam, Charlotte will make her first defense against former titleholder Carmella tonight on SmackDown LIVE.

The Queen returned several weeks ago, stopping The Princess of Staten Island from attacking Becky Lynch, who had earned a title opportunity by defeating Carmella. Afterward, Flair was given the opportunity to be added into the SummerSlam title showdown, and she took advantage by defeating Princess Mella.

At The Biggest Event of The Summer, Flair pinned Lynch to win the championship, sending The Irish Lass Kicker into a rage that saw her viciously attack The Queen and end their friendship. Two nights later on the blue brand, Charlotte and Becky once again threw fists in a wild melee and had to be pulled apart by nearly every woman on SmackDown LIVE. After the brawl, Carmella approached SmackDown LIVE General Manager Paige about getting her rematch, and her request was granted.

Will Charlotte Flair put the implosion of her closest friendship aside, or will Carmella take advantage and reclaim her title? Find out tonight on SmackDown LIVE at 8/7 C on USA Network!

Do you feel the power of the New Day celebration?

One week after The New Day reclaimed the SmackDown Tag Team Titles, join the five-time Tag Team Champions as Big E, Kofi Kingston and Xavier Woods celebrate their monumental milestone with the full Power of Positivity.

The road to a SmackDown Tag Team Championship Match at WWE Hell in a Cell will begin tonight on SmackDown LIVE when Gallows & Anderson, The Bar and The Colons square off in a Triple Threat Match.

SmackDown LIVE General Manager Paige announced that this will be the first of two Triple Threat Matches, with the winners battling for the right to challenge for the titles on Sunday, Sept. 16, streaming live on WWE Network.

Gallows & Anderson and The Bar were involved in a heated backstage confrontation last Tuesday, with the two teams both looking to establish themselves as top contenders to the titles. Primo & Epico Colon come into the match as wild cards, as they look to get back on track in Team Blue’s Tag Team division.

Who will move one step closer to a SmackDown Tag Team Title opportunity? Find out tonight on SmackDown LIVE at 8/7 C on USA Network!

Will Brie & Bryan once again deliver an A-List punch to face?

Last week, just moments before the WWE Universe learned that Daniel Bryan & Brie Bella will team together against The Miz & Maryse at WWE Hell in a Cell, Brie made a huge statement when she attacked The A-Lister. What chaos will the husband/wife adversaries cause this week as they head toward their collision at the Sept. 16 pay-per-view?

Who will strike next in the highly personal rivalry between Styles and Samoa Joe?

Last week, Samoa Joe once again attacked WWE Champion AJ Styles. What will be the fallout as these two bitter rivals head toward their WWE Championship rematch at the WWE Hell in a Cell pay-per-view on Sunday, Sept. 16?