The Redefined card is run down to start the show off, alongside the kid getting run over last week. Moose talks about thinking about retirement due to the concussion, but he isn’t a quitter. Fenix vs. Cage starts things off for the X Title. Cage evades Fenix and hits a 619. A five-springboard armdrag takes Cage down, but Cage hits a lariat and grounded elbow shots. Cage goes for a pop-up powerbomb, but Fenix hits a jumping spinkick and a rolling cutter on the ramp. Fenix then hits a crazy mushroom stomp to the back off the ramp! Cage lands a giant superkick and a burning hammer for 2.9. Fenix turns Weapon X into a sunset flip for 2. Cage catches him out of the air with an F5 for 2 because Fenix gets his foot on the rope. Cage catches Fenix off a dive and bangs his head on the guardrail and then suplexes him on the floor. Cage hits a superbomb for the win. This was crazy and a ton of fun. 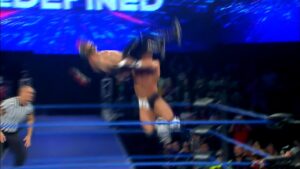 OVE jumps the Lucha Brothers after the match. Cage teases leaving, but makes a save for them. Drillclaw to Jake Crist. Dave saves Sami from the same fate. A recap of the X Title airs. Scarlett’s assistant Bobo gets stopped, so Scarlett leaves the vehicle and smoke comes out and seduces the guard. Al Snow vs. Grado is the GWN match of the week. This features a post-match beating with Joe and Low-Ki, and Drew Galloway busting Low-Ki up with a pipe. Hernandez feels bad about the kid, while King tells him in a warzone, folks get hit. MediaCon matches get hyped up – and the show will air live on Twitch at 12PM EST.

The Allie-Tessa-Su Yung rivalry is run down. Tessa cuts a promo about being destined for greatness and Eli comes out and gets a DUMMIES YEAH front row reception before telling them to shut up. He buries the Cult of Lee and the jobbers he brought out to face them. He beats up and beats Tidwell and lays out the other one. Moose and Eddie talk about getting revenge tonight. Allie, Tessa, and Su are out for the title match. The way they have the building setup, they have the entrance videos go across every side of the building – which looks awesome. Impact lucked out with the Rebel because this venue looks far more major league than anything they have run in many years.

Tessa forearms and chops away to start. Tess and Su go down and Allie hits a senton on them both. Allie hits good vibrations in the corner, but gets booted down by Su and Allie knocks her into the bridesmaids. Tessa locks on a modified Indian deathlock to Allie, but Su locks Tessa in a back armbar. Tessa escapes and press slams Su onto the bridesmaids. Allie hits a codebreaker on Su, but Tessa schoolgirls Allie and pins her to win the title. Gama Singh insults his charges and tells them to win by any means necessary. Killer Kross tells the interview girl that she’s annoying Aries. Kross says that tonight’s tag match isn’t a guarantee because a lot can happen between now and when you get to the ring.

LAX talks about how they can’t celebrate now because of Richie, and Konnan talks about the G code and violating the kid rule. Konnan gets a call and tells them to put all plans on hold. Grado, Joe Hendry, and Kat are on the Smoke Show. Scarlett tries to seduce Grado, whose champagne goes off in his hand. Scarlett laments him making her all wet and then Grado leaves with Joe before Kat threatens Scarlett. Scarlett as the devil on everyone’s shoulder is a great gimmick.

Rich Swann and Petey are out for a match to theoretically put them in the X Title hunt. Swann takes Petey down with a series of lariats and leg lariats. Petey gets a sharpshooter, but Rich gets to the bottom rope. Swann gets a sloppy cradle for 2. They trade cradles until a standing SSP wins it for Swann. Sydal tells Rich that he has the right attitude and they both want to be champion – but Swann doesn’t understand what it’s like to be X Champion. Sydal tells him that he can help him, before Alisha calls out for help for Moose, who has been taken out with a Killer Kross calling card.

Aries and Kross come down to face Eddie Edwards in a handicap match. Kross takes shortcuts whenever he can to attack Edwards. Aries gets tossed off the apron to the guardrail before Kross knees Eddie in the head to prevent a dive. Eddie finally hits the dive and lands a tiger bomb mid-ring. Moose comes to the ring and stares down Aries before spearing Eddie and they Pillmanize Eddie’s head and Moose chairshots him on the floor. Alisha rants at Moose and slaps him before they intimidate her and she checks on Eddie.