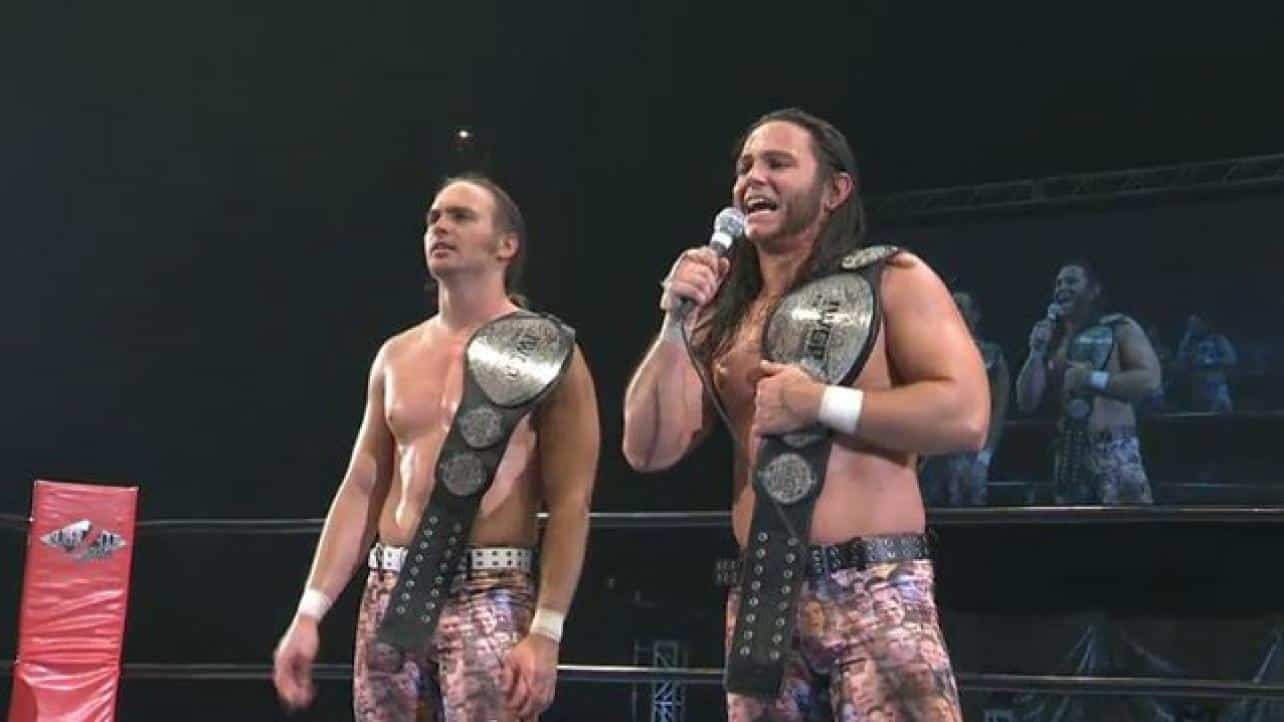 The Young Bucks recently appeared on The Ross Report talking about a variety of topics, such as their old school view on the business and their futures past the current Ring of Honor contracts.

Here are some highlights

On Their Entrepreneurial Spirit: NICK: “Yeah, man, it feels like we’ve had this way for, man, almost the whole time we’ve been in [pro] wrestling, which is close to 15 years now.” Nick said, “it’s funny, Cody actually says we’re the most old school wrestlers that he knows, which is funny coming from him because he [has] seen a lot of old school wrestlers come and go. So yeah, we really kicked into a lot of that probably more so in the last five years or so.”

MATT: “Yeah, like, I feel like we’ve always had the idea of being these business guys, but, like, at first, nobody bought the stuff. So I don’t know how successful we were at first, but I remember when we started our own independent company back in 2004 and I remember having these iron-on press shirts and I remember trying to sell these things and, at the time, we thought we were doing big business. We were probably selling five or 10 t-shirts a show, but it [has] always been something in our blood. Like, I remember having the little Polaroids back then. I guess, back then, that was the wrestler’s guide – you had to have an 8×10 [picture] and you had to have some sort of piece of merchandise. So, at the time, we started small, but we always knew, like, I can’t just rely on my payday, what’s going to be in that envelope at the end of the night. Like, I’ve got to try to make more. I’ve got to make extra.” Matt summarized, “I think we’ve always kind of had it in our blood. Not until we got really popular did we find any success in it, but it’s always something that we’ve strived to be.”

Matt on The Team Growing as Performers: “We weren’t really given the platform to have those kind of matches. And we had those kind of matches for years, but it’s just that nobody has really seen them. So to get a platform like New Japan Pro-Wrestling and for them to say, ‘tonight, we’re giving you 20 minutes.’ And it’s like, ‘oh, wow! We actually have time to let everything sink in and get some emotion out of people. And, also, for Nick and I, it’s like we are constantly trying to evolve and we want to show that we’re not just one-dimensional wrestlers. Like, we have all sorts of different gears we can change and I think it’s a challenge to ourselves. You know what? Everyone knows we can have this style of match, the car crash style of match. We’ve been having them for years. And for years, on the independents, Nick and I were the opening match and, like Nick said, they would say to us, ‘open the show up and set the show on fire.’ And sometimes you have to have those six to 10-minute, quick car crash spotfest matches and we got really good at them, but we got to a point in our career where we just wanted more.” Matt explained, “we just wanted to show everybody, ‘hey man, we’ve got more in our game.’ And it [has] been really fun because it [has] been a challenge for us to, as [Ross] said, slow it down and let things register. And I think, because of that, like [Ross] said, people want to have sympathy for a good, white meat babyface that knows how to sell. It’s old school wrestling and we’ve taken the elements of old school wrestling and we’ve dressed it up with modern style stuff and it seems like it’s timeless. It still works.”

Matt on Making a Decision Following The Expiration of Their ROH Deals: “Family is number one for us. It’s our top priority. We both have young kids and we care so much about them. And we want to have quality time with them and we’re gone a lot.” Matt continued, “and that’s our own doing. We’re independent contractors, so we make it really crazy for ourselves sometimes, but in July, we took it easy. Both Nick and I had a nice summer with the kids. So family is absolutely everything and our goal is to be able to retire at an young age and spend even more quality years with our family. And I want to give my kids a great life and yeah, to answer [Ross’] question, what are we going to do? Our contract is up in four months, so it’s getting down to the 11th hour now and we kind of have to make a decision whether we’re going to stay put, or go somewhere else, or go back to being independent guys. And I don’t know. The best thing is, we’re in a great spot right now. And I feel like we can’t really make a bad decision because whatever we do right now, we’re in one of those rare instances in someone’s career where no matter what we do right now it works. So I think we’re going to make the right decision no matter what that decision ends up being.”