Tonight is All In from Chicago!

Here are the Pulse Wrestling crew’s preview and predictions!

Harrak: While the NWA Championship doesn’t nearly hold the same prestige that it did 50 years ago, the history behind it is still tremendously respected among fans and those in the pro wrestling business. Having that championship defended on a show that is a first of its kind is impressive and adds a lot to what would have been a somewhat lackluster main event without it. Aldis has done a great job as the first champion under new NWA owner Billy Corgan’s banner but with the NWA attempting a rebirth, they need a champion who will bring attention (and money) to the organization. I can’t think of a better independent talent than Cody Rhodes.
Winner and NEW: Cody Rhodes

JT – The wrestler formerly known as Magnus has come a long way since his Gladiators days, and he’s probably got a longer in-ring future than Cody, but I think at the end of the night the belt is changing hands…
Winner: Cody

Widro – Should be an interesting match, but with Cody so far ahead of Magnus in star power, it could be uneven in fan response. I think Cody will pick up the win here./
Winner: Cody

Harrak: Not only did Rhodes and the Bucks get one World Championship on the show, they got two. The addition of Jay Lethal and the ROH World title was a definite coup that truly surprised me considering this isn’t an ROH show. I also like the stipulation of him facing the OBBR since they don’t need to advertise any more matches or talent for the show, Lethal can work with pretty much anyone and it gives the show an unpredictable element that it may have been lacking considering storylines don’t matter Saturday night. Being as the show is in Chicago, I’m going to say Cabana gets the nod to face Lethal but comes up short in winning the ROH title.
Winner: Jay Lethal

JT – wtf knows what’s going to happen with the OBBR, but I’d be very surprised if Lethal didn’t win this one, particularly as he will be fresh. Or maybe Colt Cabana might win. It’s a mystery…
Winner – Jay Lethal

Widro – Hard to see Lethal losing the title so soon after winning it, plus on a non ROH show.
Winner: Lethal

Harrak: More promotions collide in this match as NJPW faces IMPACT/Lucha. Omega was just named the Wrestler of the Year for 2018 and Pentagon Jr. may be the most talked about star under IMPACT contract since Broken Matt. Both men pride themselves on being innovators and on a night where its main theme is innovation, Omega and Pentagon Jr. could easily steal the show.
Winner: Kenny Omega

JT – probably the match I’m most looking forward to, this promises to be a hard hitting, technically proficient bout. Omega might be the biggest name in the world not working for WWE… for now.
Winner: Kenny Omega

Widro – This should be an absolutely amazing match in the ring.
Winner: Omega 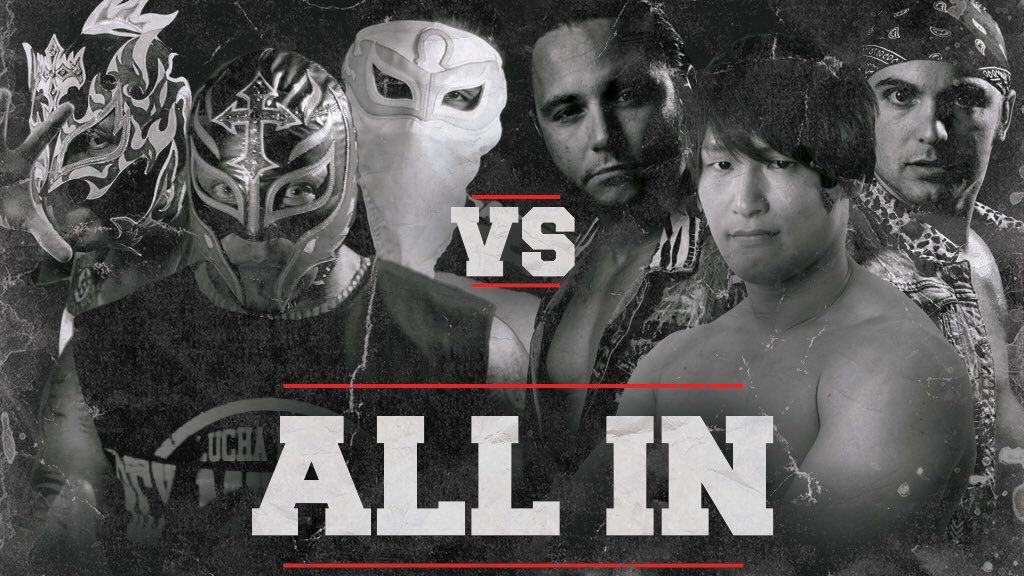 Harrak: If I thought we’d see a clash of styles in the Omega/Pentagon match, they’ll have nothing on these six. Lucha meets Strong Style as six of the best tag team wrestlers on the planet are given free reign to do whatever they damn well please. Who’s going to tell them otherwise? Two of the three bosses of the event are in the match! The Young Bucks create magic in their 6-man tag matches (anyone remember The Bucks/AJ Styles versus Cole/Bennett/Taven?) and this match will be no exception. Expect high spots and 619s aplenty.
Winners:  Rey Mysterio, Fénix, and Bandido

JT – this should be a fun match with superkicks galore and some nice high flying from the luchadores. It will be interesting to see how much time Mysterio spends in the ring, but hopefully he walks away without another injury.
Winners: The Golden Elite

Widro – The spots in this match should be off the charts!
Winner: Golden Elite

Harrak: It’s strange to think this match has never happened in New Japan but then again, Japan is a little more strict with their weight classes. At ALL IN, weight really is just a number and now “The Villain” gets a shot against the former IWGP World Heavyweight Champion. Too bad “The Rainmaker” is going to be just too much for Scurll’s trusty umbrella.
Winner: Okada

JT – the Villain vs the Rainmaker. Will Scurll’s sneakiness be able to outwit one of the best wrestlers in the world? Prepare for shenanigans…
Winner; Okada

Widro – A really unique match and a big opportunity for Scurll to step up with one of the best workers in the world. I dont think he wins but I think this will be a sleeper choice for match of the night.
Winner: Okada

Harrak: I know I may be the only one excited for this match but I am really excited for it. Longtime readers will remember that I am a lifelong Green Arrow fan (like “have a tattoo”-type of fan) and I have followed Amell’s career since he debuted as the “Emerald Archer” on his hit TV show Arrow. Amell, a diehard wrestling fan, is a freak when it comes to athleticism and he showed he had a knack for pro wrestling when he faced Cody and Wade Barrett at SummerSlam a few years back alongside Neville. Now combine all of that natural talent with the ring IQ and experience Christopher Daniels brings to the table and I believe we all will be pleasantly surprised with this unlikely matchup.
Winner: Stephen Amell

JT – can even a master like Daniels carry Green Arrow to a decent match? I sorta doubt it, but I’d like to be proven wrong.
Winner: The Flash, because why not?

Widro – It’s cool that they got a celebrity that WWE has used for the show. Amell looked passable in his program against Stardust, and this should be a fun match in between all the spot-intensive matches.
Winner: Amell

Harrak: I applaud Rhodes and the Bucks for booking a solid woman’s match for ALL IN. 5-6 years ago, a woman’s match would signify a bathroom break for the majority of independent wrestling fans. Now we’re in the middle of a cultural woman’s revolution and these 4 women are ready to make the world talk about them on September 2nd.
Winner: Chelsea Green

JT – I must admit I’m not super familiar with half of these wrestlers, so I’m going to go with the legacy.
Winner: Tessa Blanchard

Widro – Could be a showcase women’s match for the independent scene this year. All four are solid workers with experience.
Winner: Britt Baker

Harrak: I love the addition of the Chicago Street Fight stipulation as it finally made this match stand out on an already mind-blowing card. Janela and Page may be the “young boys” on this stacked night of matches but now they get to use the plunder! Expect enough clubbering to make even Dusty proud.
Winner: Joey Janela

JT – I’ve just watched the Best of Joey Janela on YouTube, and it’s a miracle the guy can even walk, let alone wrestle.
Winner: Hangman Page

Widro – I am not ultra familiar with Janela’s gimmick but this should be more of a storyline match than an in ring showcase.
Winner: Page

Harrak: It only makes sense that Nick and Matt would book a tag team match between two of the best tag teams in the world. Despite how innovative these two teams have been in their careers, I expect them to put forth a good ol’ fashioned tag team match to warm up and excite the Chicago crowd.
Winners: SCU

JT – for some reason I really like the redneck tomfoolery of the Briscoe Brothers, while I find Kazarian boring AF. Scorp is fine, I guess.
Winners: Briscoes

Widro – Some old school ROH guys getting onto this card with a big time tag match. The Briscoes are world class and Kazarian is a veteran workhorse.
Winner: Briscoes

Harrak: Not all of the talent has been announced for this match yet but that’s also part of the fun. Let a couple of spots be filled with surprises to pop the Chicago faithful and to bring in those last minute PPV buys who were on the fence. In the end, expect a hometown boy to stand tall and earn that ROH title shot in front of his friends and family.
Winner: Colt Cabana

JT – promises to be a clusterf**k, like all Battle Royales.
Winner: not the viewers….

Widro – There might be some surprises too to get some buzz for last minute buys.
Winner: Petey Williams