The CBS reboot of “Magnum PI” premiering in September features a Latino leading man in Jay Hernandez as the titular character, but his ethnicity won’t be the focus of the show.

“We’re certainly not denying the fact that he’s Latino. It is something that is acknowledged, and we plan to acknowledge it throughout the series,” executive producer Eric Guggenheim said at the Television Critics Assn. press tour panel for the show Sunday.

However, executive producer Peter Lenkov admitted that although he considers their writers’ room “very diverse,” they don’t have any Latinx writers because “it’s incredibly hard to find writers.” The gender breakdown of the writers’ room, Guggenheim said, was closer to parity, with four men and three women. 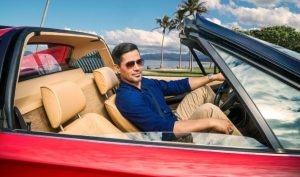 Lenkov said the reboot has the “spirit” of the original 1980s series that starred Tom Selleck, most notably through the “charm” of the titular character.

“Thomas Magnum lived off of his charm — off of the good graces of his friends giving favors. He was also somebody who didn’t use a gun [and] was the underdog in most of the situations he went into,” Lenkov said, of elements they kept. “We didn’t want to do a clone of Tom Selleck, we just wanted to find the essence of what he brought to that character, which was charm.”

Lenkov said they found that in Hernandez, and both men are excited to bring the story to a new, more modern audience.

“We’re going to do things that are going to satisfy [the original audience] — make them happy. We’re doing an homage to the ‘stache,” he said, noting that much of the younger demographic has a “vague awareness” of the show when it comes to the cars and the Hawaiian setting, “but they don’t know it so well they’re married to certain things, so it will be great to bring it to a whole new generation of people.”

Another way they updated the show was by making the Higgins character a woman (played by Perdita Weeks).

He wanted to play with the “essence” of Magnum and Higgins butting heads on the surface, being “combative — but in a fun way.” “I felt I could get more mileage out of a female character in the conflict role,” he admitted, saying he didn’t want to change the brotherhood of the other characters, such as Rick and TC (played by Zachary Knighton and Stephen Hill, respectively).

“The only thing that was maybe missing from the original was a strong female character,” Weeks adds. “There were a lot of women, but maybe not playing such an important role. It brings a new dynamic.”

Weeks continued to explain that her version of Higgins will have a “similar background to the original,” in that she, too, is ex-services, which opens up a lot of stories.

“They still have their own agendas and are very different in how they do things,” she says…