The show starts with a recap of Redefined. The X Title match comes off as a huge deal. The same holds true for Tessa’s title win and the LAX-OGz war. Moose turning on Eddie Edwards caps things off. Rich Swann comes out to face Petey in a rematch from last week. Sydal does commentary and says that being a champion is more than just holding a belt – it’s a meltality. Petey hits the la mistica legsweep for 2. Swann gets a standing SSP for 2 and a Michoniku driver gets 2.5. Swann hits his big spin kick on the floor and a 450 off the apron. Sydal distracts him by telling him to open his third eye, and he misses the phoenix splash. Petey hits the Destroyer and wins it. 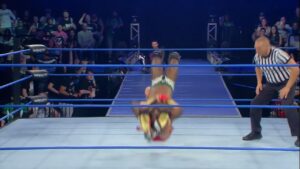 Sydal tells Swann that he’s suffering by focusing on material things. Swann says he doesn’t care about his third eye or enlightenment – he wants him to stay away. Joe Hendry sings “Platonic Love” about Katarina before he and Grado come out to face the Desi Hit Squad. The Hit Squad jumps the faces and beat Grado with a rainmaker knee and a sky high. Katarina grabs a mic and says Grado does nothing but lose. She tells him she never loved him – she loves Joe and she says Joe loves her too. She gives him a big kiss and he asks WHAT PART OF PLATONIC LOVE DON’T YA UNDERSTAND!? He’s not agnry – he’s disappointed.

Backstage, Joe apologzes for Grado for what happened. Jericho Cruise is hyped before Bully vs. Jeff Hardy in a cage airs as the GWN match. Tessa vs. Su Yung is hyped up for later tonight with Su writing TESSA in blood. Bobo sings horribly for Scarlett before KM and Fallah thank her for her advice. She wants a man with confidence and would do anything for a man like that. Eli Drake issues an open challenge, which Stone Rockwell accepts. Eli hits a gravy train and wins it.

Pentagon Jr. cuts an intense promo on OVE with Fenix by his side. Aries, Moose, and Killer Kross chat about what hey did before the interview girl interrupts. Alisha Edwards comes in and attempts to act mad about what he did to Eddie. Su Yung faces Tessa for the title while Josh hypes up TMZ covering the Redefined match ending. Tessa takes Su down with a modified Indian deathlock before Su goes for the mandible claw to break it up. Su puts her on a chair and hits a cannonball to the floor. Tessa gets choked, but gets a super cutter for 2. Su hits a spider crawl headscissors into the ropes, but Tessa hits the buzzsaw DDT to win. The bridesmaids bring out a coffin and Su takes her out, but Allie and Kiera prevent the coffin from being taken away and pull her out.

Cage cuts a promo on OVE and says no one is bigger or badder than him. King and Konnan have a gangster summit. King says he did what he had to do and the gangster guys talk about how it’ll be Santana, Ortiz, and Konnan against Homicide, Hernandez, and King in the final war. Pentagon and Fenix face the Cult of Lee next week. Zachary Wentz, Ace Austin, and Trey Miguel are out to face OVE. The Crists hit a big double dive, but Wentz hits Sami with a spirngboard knee. Wentz hits a dive off of Sami to a “This is Impact!” chant before Sami biels him around. Dave spikes him with a spinning DDT before Dave hits a modified ushigorishi and then Jake hits the chicken fight cutter to win. Sami hits the pulling piledriver before saying they’re the most deadly trio on the planet. Jake impersonates Sami with everything he does before Sami catches on and gets annoyed and says that now Cage is in their crosshairs too.

Aries, Moose, and Killer Kross come down and answer “why?” Aries calls him Moose Money and Moose talks about Eddie getting his ass kicked by Sami and he was there for him. However, when he got a concussion, Eddie was nowhere to be seen. Aries did check on him though – and that was his opponent and he asked him a question. How does it feel to be abandoned? Aries gave him a call and said he was Mr. Impact, but he’d never be the top guy in the company if he cares about the fans. Johnny Impact comes down and says that Aries couldn’t have the belt and not expect nodbody to come out. Aries said he’s right – a nobody did come out. Aries says that Johnny looks the part, but he is the part. Johnny announces himself versus Austin Aries is officially for the title at BFG. Kross and Moose attack him and Moose hits him with a chair necktie.