There were few jobs that seemed cooler than being a radio station disc jockey. What could be better than getting paid to play your favorite music? Listeners dreamed of the glamorous life of a DJ that included hanging out backstage with members of the Rolling Stones and the Beatles. The job was even more desirable when groupies promised to do anything to get their request on the air. Being a DJ was what astronauts wished they could achieve in life. Turns out this was more myth than truth. Most people view WKRP in Cincinnati as a comedy view of life inside a struggling radio station in a mid-level market. After spending time working at a college radio station and rubbing elbows with the professional disc jockeys, WKRP proved to be more realistic than any ’70s drama. The comedy of radio comes from thinking you have so much power as a DJ. WKRP in Cincinnati: The Complete Series brings together all four seasons from when radio ruled the TV dial.

“Pilot” & “Pilot 2” start the show on a rather sleepy foot. WKRP is the lowest rated radio station in Cincinnati. There’s little to be excited about since the format is music your grandparents swore was dated. The station manager is Arthur Carlson (Gordon Jump). He’s mainly preoccupied by fishing. He doesn’t care about his job since WKRP is owned by his mother. John Caravella (Head of the Class‘ Howard Hesseman) is a burned out DJ whose career was destroyed in Los Angeles when he said a naughty word on the air. He’s barely got any life in him as the morning DJ. The only person near the microphone with any pep is newsman Less Nessman (Richard Sanders). Problem is the guy is horrible when it comes to reporting. He’s fixated on hog reports. The only sales guy is Herb Tarlek (Frank Bonner), but he has enough cheese and sleaze for a staff of twenty. Most of his focus is on the station’s receptionist Jennifer Marlowe (Loni Anderson). She refuse to do anything at her desk and Mr. Carlson has no problem with it since she’s the hottest thing going. Bailey Quarters (Jan Smithers) seems to pick up the paperwork slack as she hopes to produce shows. Into this sedate calm arrives Andy Travis (Gary Sandy), the new programming director. He’s straight out of New Mexico, but he has no desire to bring a Western attitude to his new turf. Andy is out to get people excited about WKRP. This starts with changing the format to rock music. The impact is immediate as Caravella transforms into Dr. Johnny Fever. The office looks different with the arrival of after drivetime DJ Venus Flytrap (Tim Reid) to make the station’s signal more sexy. The new sounds and voices are met with a lot of defiance from old listeners and older employees. Les and Herb fear the change. Andy has to figure out ways to win them over.

“Les on a Ledge” brings a daring bite to its comedy. A baseball player gets Les banned from the locker room since he swears the inept reporter is really gay. “Hoodlum Rock” introduces the concept of Punk rock to America when the station promotes a concert by Sum of the Earth. The band features cast members of Heroes and Phantom of the Paradise. This should have been the most memorable of the early episodes except we’re given the ultimate radio station Thanksgiving special in “Turkey’s Away.” Carlson wants to have an amazing holiday promotion when he surprise people with free turkeys. Except the surprise backfires royally. Back in 2007, there was a release of the first season of WKRP on DVD. The episodes were butchered because songs used in the show couldn’t be licensed. During “Turkey’s Away,” Dr. Johnny Fever plays Pink Floyd’s “Dogs.” In the original DVD release, this scene is slaughtered. While Pink Floyd didn’t license the music for the Complete Series, there is a clone song that has the same texture including dogs barking so the big joke remains. The good news about this boxset, judging from various reports, is that over 75 percent of the music is intact. None of the episodes feel hacked apart.

“Mama’s Review” is an early clip show that happened when CBS didn’t run the show for most of November and December. It’s strange on the DVD set to be caught up when you’ve watched the previous 8 episodes a few hours back. “A Date with Jennifer” was also a disappointment on the original DVD release. Les gets Jennifer to accompany him to a big news ceremony. There are few things funnier than watching Les get spiffed up for his hot date including slapping on a head of hair. What made it iconic was Foreigner’s “Hot Blooded” blasting. It was gone from the original DVD. Now it is back and makes the moment so memorable. This did more for Foreigner than anything they ran on MTV in the ’80s.

WKRP came from the MTM productions which had already scored hits with The Mary Tyler Moore Show and The Bob Newhart Show. Although as far as workplace TV shows go, WKRP set the tone for MTM’s Hill Street Blues. The comedy series had no problem dealing with serious issues. Venus Flytrap’s past crops up in “Who Is Gordon Sims?” But then it’s followed up with a delightfully insane “Fish Story” which has the WKRP mascot battle a giant pig in a men’s room. There’s also Johnny and Venus competing in a drunk reflex test. Things would get serious with “In Concert.” At the end of 1979, The Who came to Cincinnati for a concert with festival seating. The crowd outside one set of doors panicked when they thought the show had started without them. People rushed and 11 concertgoers were trampled to death. WKRP addressed this real life event in stark terms.

The show dared to look into the future of media. “Carlson for President” questions why it isn’t a good idea for people who own media companies to run for public office. Sadly New York City ignored this episode when they gave the town to Bloomberg. “Venus Rising” predicts the future of radio. Sure Venus gets offered his dream gig at a rival radio station. But he learns that the place is fully automated. Instead of being a real disc jockey, he’d merely read a few lines that would be put into the system to give the illusion of live radio. The true focus of the station was the massive advertising sales staff. This is what would become of radio in the 21st Century thanks to Clear Channel. “Real Families” predicts what frauds people will be in order to get themselves on a reality show.

The fourth season of WKRP has connecting storylines through out the episodes. Things start off with a bang in “An Explosive Affair.” Terrorists want to blow up the station for no good reason. There’s another explosion when “The Union” gets the employees to think about job security. This is rather comical since most people in radio barely last a year at their station. There’s a lot of power struggles with Mama Carlson. She hires “The Consultant” to do Andy’s job. The series was unexpectedly canceled at the end of this season. While it was painful, this should be seen as a good thing for the legacy of WKRP. “Up and Down the Dial” wraps up the show with the greatest moment for the station. The new book comes out with the ratings showing WKRP is #6 in the market. Dr. Johnny Fever is the highest rated morning show. This should be a time of celebration except Mama Carlson isn’t happy. She wants a format change that will reflect the future of AM radio in America. This surprise turn isn’t a surprise as it reflected what was really being done in the radio world. AM stations were going all talk and news. Music was left for FM. Once more WKRP was grounded in the reality of radio and not merely pushing an idealized myth. The episode feels like a farewell without having to go for the big send off. The episode also gave away the big secret of how WKRP exists. This is a much better ending than Cheers and Seinfeld.

The fact that WKRP wasn’t a massive TV sensation that lasted a decade made the show so much more enjoyable to rewatch. Sure Loni Anderson was a massive sex symbol. But there was no movement to give Jennifer a spin-off series. The cast that started the series was the one that ended up in the final scene. This is rather odd since radio stations have such a amazing turnover rate. Program directors get changed with each quarter’s rating book. Disc jockeys find themselves either moving up the market ladder or falling down. Either you’re getting hired away because a station covets your success or you’re fired for being a failure. Nobody is happy by remaining the same. For four seasons, viewers didn’t have to say goodbye and make friends with new characters working at the station. Each character was given plenty of opportunities over the season to shine in an episode or three. Sure Jennifer could have come off as a gold digging slacker receptionist, but there was more depth and charm to her responses. Even though Jennifer was hot, nothing compare to the visual explosions of Herb’s wardrobe. Even after all these decades, Herb’s suits are massive hot messes.

WKRP in Cincinnati succeeds since it shows off the thankless, low paying reality of being a DJ. But it also dipped into the fun and joy that can happen with such a job. Now the series exists as a warm nostalgic look back at a time when radio wasn’t controlled by central computers aimed for a demographic and an army of salesmen. WKRP in Cincinnati: The Complete Series brings together all of the episodes with a majority of the musical moments.

The video is 1.33:1 full frame. WKRP was shot on standard definition videotape so this is the best it will look like on home video. Even with the lower resolution, you’ll be amazed at Loni Anderson’s hair. The audio is Dolby Digital mono. The mix is fine between the dialogue and the records being played on the air. The episodes are Closed Captioned.

Baby, If You’ve Ever Wondered: A WKRP in Cincinnati Reunion (44:12) is a recent reunion of the cast at the Paley Center. Creator Hugh Wilson keeps things snappy. Loni Anderson is ageless. Director Jay Sandrich gets to talk about working on the pilot.

A Look Back at WKRP in Cincinnati with Gary Sandy (25:05) lets him get his say since he missed out on the Paley reunion. He still has a fine head of hair.

Do My Eyes Say Yes (6:27) explores Jennifer’s effect on the characters. Frank Bonner recounts how easy it was for him flirt with her.

WKRP in Cincinnati: The Complete Series brings together all the episodes of a great sitcom. While there have been musical replacements from the original broadcast masters, nothing seems too jarring for casual fans. 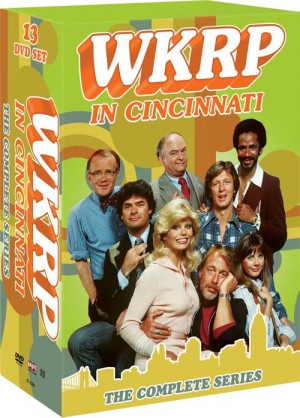 This review was first published in 2014.