William Castle made his reputation as director and showman when he released House on Haunted Hill with the live-action Emergo effect. The film got people excited to go to the movie theater instead of stay at home and watch TV. Forty years later, the movie was remade with a much bigger budget and special effects that went beyond Emergo. They even got an Oscar winner to dress up as Vincent Price. Now the remake is coming to Blu-ray as part of Scream Factory’s line of frightening flicks. The bonus features include new interviews with the filmmakers. Here’s the press release from Scream Factory: 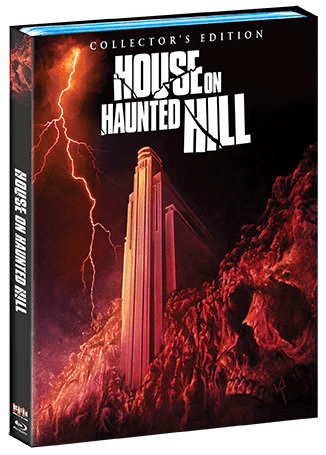 One night in the house, one million bucks, no questions asked. But there is a catch for anyone who accepts the offer. Murder is a way of life at the House on Haunted Hill, a jolting, effects-ramped remake of William Castle’s 1959 cult classic. Produced by Robert Zemeckis (Contact, Beowulf), Joel Silver (Suburbicon, Predator), and Gilbert Adler (Constantine, Tales from the Crypt), and directed by William Malone (Feardotcom, Parasomnia), HOUSE ON HAUNTED HILL stars Geoffrey Rush (The King’s Speech), Famke Janssen (X-Men), Taye Diggs (Empire), Ali Larter (Resident Evil: The Final Chapter), Bridgette Wilson (Mortal Kombat) with Peter Gallagher (Covert Affairs) and Chris Kattan (The Middle). On October 9, 2018, SCREAM FACTORY™ is proud to present HOUSE ON HAUNTED HILL Collector’s Edition Blu-ray, which includes new 2K scan of the film, new interviews with cast and crew, and much more!

Geoffrey Rush plays twisted theme park bigshot Stephen Price, who’s hosting a birthday bash for his wife (Famke Janssen) at a house that was once an institute for the criminally insane. Five strangers are each offered a chance to earn one million dollars if they can survive a night in the house. But what starts out as a harmless birthday prank soon turns into a night of horrific terror.