Has it really been 20 years since Leo teamed up with four arthouse all-stars to bring the classic tale of The Man In The Iron Mask? The film was a major hit thanks to Leo becoming a megastar with Titanic sailing to box office glory. Now the film is joining the Shout! Select line with a Blu-ray coming out on October 9. Here’s the press release from Shout! Factory with the bonus features: 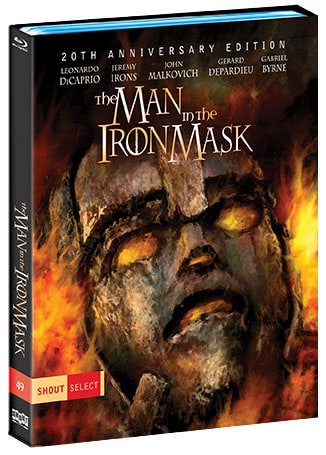 For the honor of the crown and the destiny of a country, four heroes must reassemble for one last epic battle in the cult film classic, THE MAN IN THE IRON MASK. Directed by Randall Wallace (We Were Soldiers, Pearl Harbor), Leonardo DiCaprio (The Revenant) leads a phenomenal cast, including Jeremy Irons (Red Sparrow), John Malkovich (Bullet Head), Gérard Depardieu (To the Ends of the Earth), and Gabriel Byrne (Hereditary) in this thrilling tale of majesty and Musketeers. In celebration of the film’s 20th anniversary, Shout! Select will release THE MAIN THE IRON MASK 20th Anniversary Edition Blu-ray on October 9, 2018. This definitive home entertainment release features new 4K scan of the film, new interviews with producer Paul Hitchcock and production designer Anthony Pratt, insightful bonus content, and more! Movie collectors and fans can now preorder THE MAN IN THE IRON MASK 20th Anniversary Edition Blu-ray at ShoutFactory.com

Movie synopsis
Louis XIII, King of France, had a son, Louis, who succeeded his father to the throne. But, known to very few, the heir had a twin brother, Philippe, hidden away after birth and forced to languish in prison, his identity unknown behind an iron mask. His brother, now grown and King Louis XIV, proved to be both corrupt and a tyrant. Louis sends Athos’ son, Raoul off to certain death in war, so that he could have his woman for himself. Athos, together with two of the other Musketeers, Porthos and Aramis, swear revenge. Only D’Artagnan remains loyal to the crown, but will he join his former compatriots to free Philippe from prison, kill the king, and put Philippe on the throne in his place?