Long-Time NBC Creator Dick Wolf Brings FBI To CBS In A Super-Charged Real-World Political Climate, But Show Will Be Apolitical?

FBI executive producer and TV Godfather of the procedural said Sunday morning he was excited to be at TCA with a CBS show in “long, long time.” And by that, he was referring to the short-lived 1997 series Feds. But with FBI, Wolf brings a new look at the bureau that has been under attack by Donald Trump for obvious reasons. Even so, Wolf is looking to not politicize the new series which will debut on [Sept. 25 now].

Wolf, who was joined on the stage by series stars Missy Peregrym, Zeeko Zaki, Ebonee Noel, and Jeremy Sisto, said that he has avoided politically-driven shows. “If you do that, 50% of the audience is pissed off from the first frame,” he said.

With FBI, Wolf said he fulfilled a dream, having been in close relationship to the bureau from a very young age. His uncle was in the FBI and he idolized him and the agents. With the show, he wanted to give a different look at the bureau, showing the day-to-day scope of the “boots on the ground” team that is seldom seen in the public… 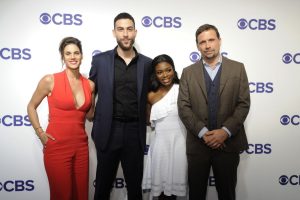 …The core cast of Peregrym, Sisto, Zaki and Noel talked about their roles in the series. With Peregrym, Wolf says that she “sealed the deal” for her FBI gig when she went toe-to-toe with Mariska Hargitay in an episode of SVU. “If you take on Mariska one-on-one for a three-and-a-half minute scene — that’s pretty good!”

On her role as Agent Maggie Bell, Peregrym said: “I really, really have a passion for justice.” She adds, “I really want to believe that people want to do the right thing. I’m fascinated by human beings and human behavior.”

Wolf also pushes the inclusive cast, specifically with Zaki, who is Egyptian, Muslim and speaks fluent Arabic. Zaki points out that FBI cast is one of the most outgoing diverse group of people and that proper representation of stories about Arab Americans in the country “is not a daunting task, but a real one.”

Wolf said FBI celebrates the “troops on the ground” and that there are “endless stories” that can be told through the series.

“People are going to get a realistic view on how that office operates,” said Wolf. “A lot of them, over the years, felt underappreciated for what the real work is.” He also says that the bureau is happy with the positive portrayal in a time when they are getting attacked.

With all the potential stories that can come out of FBI, Wolf was asked if there would be possible spinoffs. He assured there wouldn’t be a show about ICE or the EPA.

Wolf said he doesn’t want to put the “cart before the horse” but if this one works they can try to double down in some way.

“It’s worked before,” he said.