It all leads to this!

Simon Baz and his ring travel to Superman’s pre-Man of Steel mini-series Fortress of Solitude.

They think Superman is trapped in the Fortress, but…

…they’re actually being duped by Hank Henshaw the Cyborg Superman!

Some of the Green Lanterns think Simon Baz is a traitor, but not his partner Jessica Cruz and other. However…

…he has bigger concerns as he’s in the crosshairs of teh Cyborg Superman – Hank Henshaw – who Simon Baz freed thinking he was actually Superman. 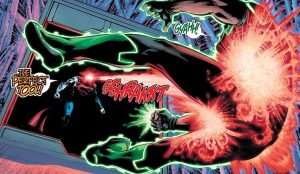 Simon and his ring were duped by Cyborg Superman and the Phantom Ring!

And, Cyborg Superman is even more powerful as the new Phantom Lantern!

…not only in allowing him to get possession of the Phantom Ring, but…

Simon Baz is bloodied after Cyborg Superman leaves him; he enters the Fortress of Solitude and…

It is followed by two more issues before this series ends. The forst is Green Lanterns #56 out on October 3, 2018…

…and then the storline and series finale in Green Lanterns #57 that hits stands on October 17, 2018.

Will the Cyborg Superman have the last laugh?