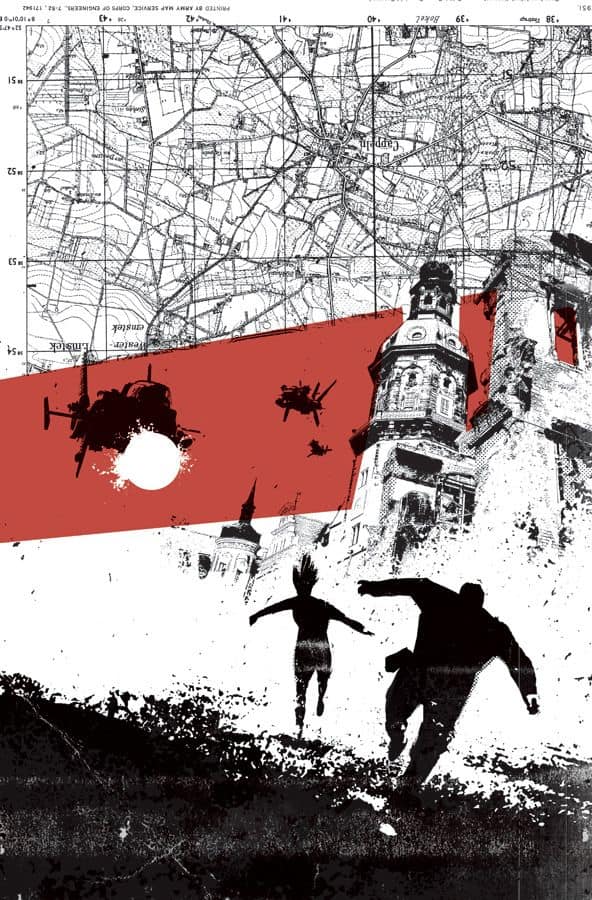 Cemetery Beach #1 – Warren Ellis and Jason Howard are back with a new science fiction series.  Decades ago, a small colony was established on another planet, but very little is known about how things have turned out there.  Now, an observer has been sent to get the lay of the land, and has been captured by the totalitarian regime that runs the place. He escapes, and spends most of the issue on the run with a local guide he meets along the way.  This is a kinetic issue full of great chase scenes, as Ellis lets Howard do the heavy lifting. Beyond the cool action, there is also the fun of designing a civilization that broke from our own a ways back, and developed technology differently.  It’s all pretty cool, and part of the resurgence of quality science fiction comics.

Daredevil #608 – Mike Murdock is determined to stick around, and what surprises this issue (aside from the surprise return of Bushwacker) is the way Matt reacts to his fake brother’s presence.  This was another solid issue in a solid run. 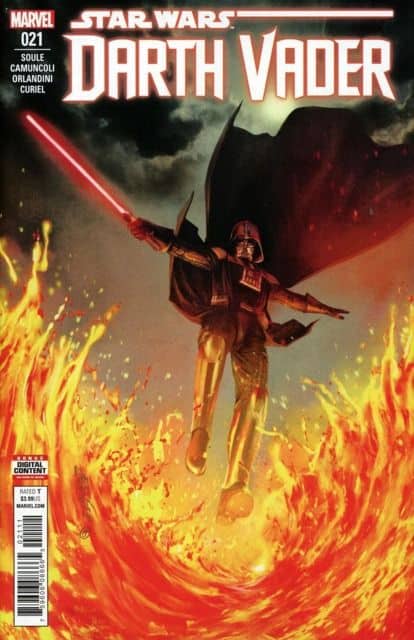 Darth Vader #21 – Vader has been given the planet Mustafar by the Emperor, but it’s not exactly clear, especially to the architect assigned to assist him, what he wants to do with it.  Charles Soule continues to leave us guessing as to what is going on in Vader’s head, as we see him go about his business. This series really works.

Farmhand #3 – The story keeps getting deeper here, as we have mutated dogs, weird not-so imaginary friends, and the spectre of an internet scandal all hanging over the Jenkins family.  Rob Guillory has a lot to say with this book, as three issues in we keep getting new concepts thrown at us. Personally, I couldn’t be happier with this title at this stage. I feel like we are getting to know Ezekiel better with each issue, while Guillory dances around his true issues with his father.  In the letters page, Guillory clarifies that this series will run for twenty-five to thirty issues, which is great news, as I see a lot here that I want to watch him explore in depth. This is one of the better series to debut this year.

Iceman #1 – I was surprised to see Iceman return after his series was canceled not too long ago; also, I was very happy to see it come back.  It feels like writer Sina Grace is taking a more traditional approach with this story, giving us an Iceman who is no longer struggling with his sexuality so much, and is instead heading back to protecting people in need.  He suspects something is going on with the Morlocks, and teams up with Bishop to check things out just in time to prevent a new Mutant Massacre. It’s a good issue, although I found Bobby’s constant quipping to be a little more annoying than it was in the last run.  Nathan Stockman is a decent artist choice, although I’m not sure that Anole ever had a tail before…

Mage: The Hero Denied #12 – Magda’s escape plan seems to be working, which is great news, but Kevin’s efforts to find his wife and son have not been going as well, and he’s starting to despair.  Matt Wagner keeps things moving in this issue, and it’s all pretty good.

MCMLXXV #1 – I find Joe Casey’s output to be inconsistent these days, but this series about a cabbie who also fights ninjas and monsters in 1975 New York caught my eye, largely because of Ian MacEwan’s great art.  I enjoyed this issue, and might be getting the rest of the series, even if it feels like something I’ve read before.

The New World #3 – This fun and exciting series from Ales Kot and Tradd Moore continues to be very entertaining.  Now on the run, Kirby makes it so her grandfather’s network can’t lie on Stella anymore, but she’s insistent on retrieving her cat before they head out on the road.  This, of course, leads to them walking into a trap that allows Moore lots of opportunity to draw some mayhem. Kot has really gotten his groove back, as this series and Days of Hate, which is incredibly different, both show.

Ninjak #11 – Now this is exactly the kind of Ninjak book I like.  He’s being manipulated by MI-6 into tracking down Livewire, and is given information on the location of Gilad’s body in return.  This has Colin infiltrating a small community living near Chernobyl. Roberto de la Torre is a fantastic artist, especially for a story such as this one.  I’ve found Valiant’s output to be inconsistent lately, but this book (with the possible exception of the last issue) has been very reliable.

Oblivion Song #7 – It’s finally time to learn the truth of what happened when part of Philadelphia traded places with an alien dimension.  We learned at the end of the last issue that Nathan was involved, but now we get the whole story, and it does both explain a lot of his actions and guilt, and makes him a much more complicated character than we originally thought.  I feel like this book is going to have more staying power to it than Outcast has, placing it around the same place as Invincible in my esteem for Robert Kirkman’s work. There’s a lot of material here that can be mined for years.

Proxima Centauri #4 – More random-seeming mayhem and beautiful art.  I’m not all that interested in the story in this comic, but I love how Farel Dalrymple presents it.

The Seeds #2 – I’m so glad to have Ann Nocenti back writing complicated comics again.  The Seeds is a deeply layered story about a technology free zone, aliens who come to record the ends of worlds, the desire to perform actual journalism, and the sadness of slaughtering pigs.  David Aja’s monochromatic pencils give this book a somber atmosphere. I feel like I might be missing some of the nuance of Nocenti’s story, at least on the first read, but am pretty fascinated by her vision of the future, and the way she builds character.  I have missed her work a lot, but hadn’t even realized it.

The Wicked + The Divine #39 – This complex arc ends with some big changes taking effect, especially for Persephone.  This is a stronger issue than the last couple have been, as Kieron Gillen and Jamie McKelvie prepare for their big final arc after a short hiatus.  I loved this book a couple of years ago, and still enjoy it, but feel like it is time for it to come to its end.

Infinity Countdown #3-5 – This event suffers a little from multiple personality disorder.  The Guardians of the Galaxy pages, drawn by Aaron Kuder, are excellent, while the more mainstream Marvel Universe stuff, drawn by Mike Hawthorne, are often awkward and stilted.  There is perhaps too much set-up needed for Marvel events these days, as this series was five issues (plus various spin-off one-shots and minis) of arranging chess pieces on a board before the real event could take place (after another intro one-shot).  Event fatigue shouldn’t set in before the event begins, should it? Also, I hate what they’ve done with Galactus and the Silver Surfer here.

Infinity Countdown: Black Widow #1 – Amid all the other Infinity Countdown weirdness is this one-shot wherein Nathasha uses the Infinity Stone she got from Wolverine (what a swerve that was) to teleport around some.  It’s fine, but after Matthew Rosenberg put Natasha to such good use in Tales of Suspense and in Punisher, this felt a little tacked on.

Infinity Wars Prime #1 – I guess we’re finally ready for the main event to begin?  It took a long time to get here, and I’m not sure that most of it was worth it. It’s interesting that most of the characters on the cover never appear in the actual comic, and that instead we get a lot of Loki whining.  Gerry Duggan’s Marvel work is very hit or miss.

Peter Parker the Spectacular Spider-Man Annual #1 – I was surprised when Chip Zdarsky had Peter reveal his identity to J. Jonah Jameson a few months ago.  The main story in this annual explores how their relationship has changed, as Jonah has to deal with an old rival hunting him for revenge, while also having to navigate a world where two of the central things in his life (the Daily Planet and his hatred of Spidey) are now closed off to him.  Michael Allred illustrated this story, and it looks great. There’s also a backup where Chris Bachalo busts out some changes to his art style that works very well. This was a good comic. 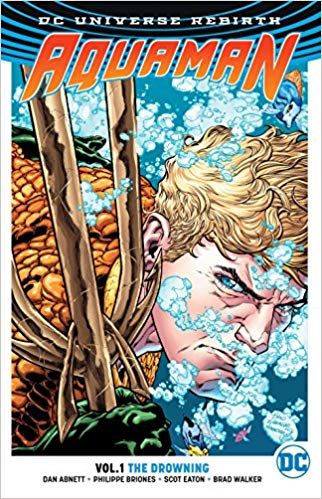 Aquaman Vol. 1: The Drowning – I passed on Aquaman when the Rebirth initiative launched, and then realized that skipping it was probably a mistake.  Dan Abnett gives us a different take on Aquaman than I’m used to (I never read any of Geoff Johns’s run him). He’s a king who is trying to bridge his world with the surface world, specifically America, and that’s not sitting well with all of his people.  A terrorist attack on an American military vessel leads to Aquaman’s incarceration, and Mera’s overreaction to this sends both nations to the brink of war. Brad Walker and the other artists give us the clean, classic Aquaman look, while also updating the character nicely.  This book was a little slow starting out (I blame the editorially-mandated one-shot that delayed the true beginning of the story), but quickly became an exciting read. It’s good stuff, and I’m glad I’ve already got the next four trades to dig into.