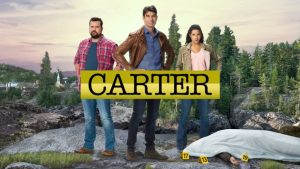 Will The Jerry O’Connell and Sydney Poitier Heartsong Fronted Series Make It Past Season 1? The answer is unknown, but it does look promising.

In Canada, the show moved from boutique channel Bravo, where Season 1 had its original run, and recieved a main TV channel run on CTV this past summer.

In addition, in the United States, WGN picked up Season 1:

Additionally, WGN America announced that it will host the stateside debut of the Canadian detective comedy Carter, starring Jerry O’Connell, on Tuesday, Aug. 7. The Crossing Jordan vet plays an actor who draws on his experience as a TV detective to solve real-life crimes with his two best friends (Chicago P.D.‘s Sydney Poitier Heartsong and Orphan Black‘s Kristian Bruun).

So, a Carter Season 2 looks promising, but hasn’t been announced yet; nor has the series been canceled. Stay tuned.