A recap of the OVE and Brian Cage issues start the show off. Ditto the OGz and LAX argument. Aerostar, Loredo Kid, and El Hijo del Kingo are out to face OVE – who have a new theme. Loredo and Jake have a great exchange until Aerostar flies in – but Sami takes him down. Everyone does crazy dives to OVE members back to back to back. Another trio of dives are capped off by a 450 by Loredo for 2.9. OVE lands stereo tombstones with Taker covers for 2.9. Chicken fight cutter from Jake gets the win.

Matt Sydal talks to Rich Swann about their misunderstandings and he wants to see his name in the spotlight. He wants to team with Swann tonight against the Lucha Bros. Swann’s down with that, but wants him to stay out of his way. Tessa bullies a woman wrestler and tells her to move her stuff. Fabi Apache stands up for the other woman and tells her she’ll teach her a lesson. Aries faces Texano in a title match tonight. Eli Drake is out to face Trevor Lee, and beats him quickly with the gravy train. King talks to the OGz about showing what true violence is. King’s opponent gets beaten up by the OGz first and a spinning backfist ends it. 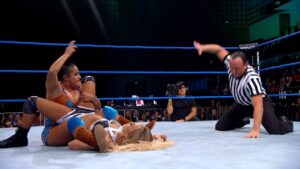 King calls out LAX and Konnan is backstage and they tell him about what’s going on in the street. Konnan tells them to not break the cease fire because they’ll have an acid bath as a result. He’s gonna wait until BFG just to be safe though and kick King’s ass. Alisha is out to face Faby Apache. Faby shows off her power a lot by carrying Alisha around and Faby wins with a sitout powerbomb. Tessa gets a challenge laid out to her for next week. Texano and his really nasty forehead scars cut a promo on becoming Impact Champion tonight.

Scarlett tells boys and girls that she has a huge announcement next week. Swann and Sydal are out to face the Lucha Bros. Penta punts both guys to avoid a double backdrop. Double cutter from Fenix leads to a giant corkscrew dive. Fenix goes for the somersault cutter, but Sydal hits a jumping knee to the jaw. Fenix hits a double stomp to the back of Swann while Penta hits the package piledriver on the apron. Fenix driver ends it for Swann. OVE comes down, but Cage makes a save. Aries insults McKenzie Mitchell while Moose is in a wacky tie-dyed shirt. Aries says he’s facing Texno since he’s taken everyone else out – and he’ll beat Johnny Impact so bad he’ll need yet another new name.

The Desi Hit Squad get massages and hype up their Impact tag title match next week before Gama Singh beats them up. Joe Hendry sings another song about Katarina being a friend and Grado being his best friend – or at least in the top 3 while we see him dancing at the airport and on a pole. An Ultimate X match airs as the GWN clip. We see Su Yung’s reign of terror alongside Tessa’s title win.

The Impact Hall of Famer is Abyss – showing his history as Prince Justice in 2002, the whole wacky run with Mitchell including his NWA Title win, tons of tacks and fire alongside his run as Joseph Park. Texano comes out to generic Mexican restaurant music. Aries gets dominated a bit early eating an outside-in hilo. Texano hits a superkick and whips him with the lariat for 2.Texano goes for a powerbomb, but Aries turns it into a brainbuster to win. Johnny Impact runs down in wacky ’80s garb before taking out the goons with Eddie Edwards.