Julie Chen Moonves To Stay On With Big Brother Franchise Into 2019 Despite Ousting Of Husband Les Moonves Over #MeToo Allegation From CBS President Role. 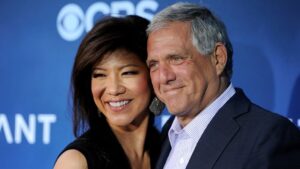 She also recently signed off from a recent episode of Big Brother using her full name Julie Chen Moonves instead of just Julie Chen. She has also left her daytime talk show The Talk earlier this week to spend more time with her family.

Her sexual misconduct-accused husband may have been knocked off his lofty perch as CBS CEO, but Julie Chen Moonves intends to stick around fronting Big Brother and Celebrity Big Brother, at least for now.

Heading toward next week’s Season 20 finale, the ex-The Talk co-host has told individuals at the network that she wants to keep her 18-year gig hosting the reality competition series. Additionally, sources close to Chen Moonves say she will continue to work on Big Brother and looks forward to hosting the show for years to come.

While Big Brother hasn’t been renewed officially for a 21st season by CBS, Chen Moonves’ contract runs for the next edition of midseason spinoff Celebrity Big Brother in early 2019 and one more season of the mothership show. Insiders say that as things stand, with two independent investigations into Les Moonves’ alleged actions ongoing and the situation fluid, the consensus at the network is to keep Chen Moonves on both the now-auditioning Celebrity Big Brother and Big Brother itself next year.

Married to the now -deposed CBS CEO and chair since 2004, Chen has started calling herself Julie Chen Moonves in recent weeks as scandal enveloped the executive and saw him ousted by the board on September 10. Most recently, last night on a pre-taped Big Brother, the host introduced herself that way for the first time on that show. She had called herself Julie Chen has for years at the top of the show but used Julie Chen Moonves at the conclusion of the September 13 episode.

With tonight’s Big Brother going out live from the CBS Studio Center in Studio City, it is expected the host will start things off in a similar fashion and continue to do so up to and including the September 26 finale.

Earlier this week, Chen Moonves departed The Talk with an expected video message.

“I have been at The Talk since the day it started nine years ago, and the cast, crew and staff have become family to me over the years,” the once chat show co-host said. “But right now I need to spend more time at home, with my husband and our young son, so I’ve decided to leave The Talk.”

On the matter of her future at Big Brother and Celebrity Big Brother, CBS officially declined to comment when contacted by Deadline.