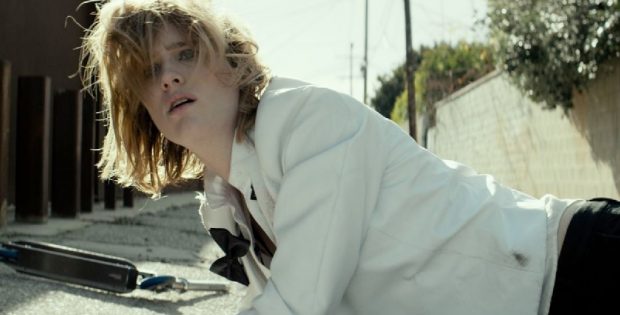 Mackenzie Davis was the break through star of AMC’s Halt and Catch Fire as the punky coding genius who wanted to do more with computers than make them number crunchers. She easily held her own in the 80s and 90s cyber drama. She blended between the times with a punky yet spiritual attitude. Now Davis arrives on Blu-ray with Izzy Gets the F*** Across Town. The film puts her on a mission to get to the other side of Los Angeles. It’s always nice when the movie’s title acts as the logline.

Izzy wakes up from a strange conversational dream to discover she’s in a stranger’s bedroom. She collects her stuff quietly and sneaks away only to realize she hasn’t a clue where she is. This leads to that awkward talk with her one night stand that includes asking how she got there. She learns a little about her date and she gives her a ride home since her car is in the shop. Before she can go inside to get cleaned up, her cellphone rings with the news that in five hours her ex-lover is going to get engaged to her ex-best friend. Even in a stained white waiter tuxedo, she does her best to hit the road to get across town to crash the party and bring the pain. First she shows up at her pal’s house to get her car. He’s not quite done with it. Izzy finds herself getting more frustrated as her mechanic just gets distracted by beers and a mysterious smoking neighbor. She can’t sit around and get drunk. She hits the sidewalk because her scorn must be unleashed. She won’t take the bus because she has standards and it would make the film much shorter.

A lot of Izzy’s life gets reviewed during the trip. The people whose home she’s couch surfering with have a baby on the way and need her gone in a shortly. Her musical career has never recovered from a little success at SXSW and the meat grinder of Los Angeles. This is why she’s stuck doing catering gigs. This does eventually lead to a sweet moment when Davis duets with Carrie Coon on a Heaven’s to Betsy song. There’s quite a few fun cameos including Haley Joel Osment (The Sixth Sense) needing help breaking up with his girlfriend. It’s not close to a direct trip for Izzy.

Izzy Gets the F*** Across Town works because of the curious charms Davis brings to the character. Her mission is horrible yet there’s a curious factor in figuring out how she will get her revenge on the engaging couple. It’s kind like how Anna Faris made Smiley Face work. It’s a fun quirky journey across Los Angeles without everything just getting stuck on the 405.

The video is 2.35:1 anamorphic. The brings out the details of Izzy’s multiple vehicle race across Los Angeles. The audio DTS-HD MA 5.0 and 2.0. You’ll get hear of Izzy’s journey. The movie is subtitled.

Audio commentary with Writer/Director Christian Papierniak and Director of Photoraphy Alexndre Naufel breaks down what it took to make the cross town adventure.

Behind-the-Scenes Documentary (66:45) gets really deep into the film with cast and crew. Director Papierniak designed the film so they could shoot the film during weekends.

Deleted & Alternate Scenes (6:51) includes a discussion about when would you kill baby Hitler.

Theatrical Trailer (1:39) explains why she has to get across town.

Tags: Halt and Catch Fire, Izzy Gets the F*** Across Town, Mackenzie Davis