The Sanctuary Opens For DC Super-Heroes With PTSD and Other Trauma Variant Covered! 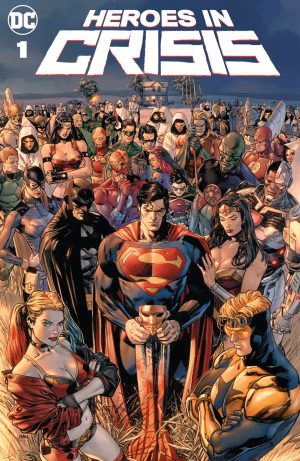 The life of a superhero is full of risks—it’s a complicated thing, being the person in charge of saving everyone. You can have all the powers of a Kryptonian, a power ring from any color of the emotional spectrum or the skills of the World’s Greatest Detective, but there are still times where everything—and we do mean everything—is going to go wrong. And those failures, regardless of fault or explanation, sometimes stick around a lot longer than the victories.

Luckily, there is a solution on the rise: Sanctuary, a facility designed to allow superheroes to process the trauma of those not-so-heroic moments, is open and operating in the DC Universe, ready to take in all comers and—in theory—help the people who help us. But that’s not always the safest or most glamorous job, and in HEROES IN CRISIS, we’re about to get a firsthand look at just how risky that process can be.

Sook’s concept covers will take a deep dive into Sanctuary’s files, giving us a firsthand look at some incident reports from across the DCU—incidents that might be a bit familiar to you. Starting in issue #1 with a look at the death of Superman, Sook’s covers will travel the timelines of heroes like Batman, Hal Jordan, Wonder Woman and Harley Quinn to explore some of their most traumatic moments and envision just how they would look as case reports filed at Sanctuary.

“I think these momentous occasions fit so naturally into the scope of the project as a whole. Many devoted readers know these events, but even new readers can instantly connect to them or may be aware of them already. Like the death of Superman or Batman’s back being broken—these defining moments have already come out in other media like film, animation and games, because they are lasting, character-defining moments. They go beyond the comic book page into something human that we can all relate to. It’s what makes the series so compelling, to see how the heroes have to deal with [trauma],” Sook explained.

And the dates on those case files in Sook’s final images? Well, those are significant, too, but maybe not in the way you might expect. Sook elaborated: “They deal with the date of the stories’ original release but without a year ascribed. That is deliberate. I researched the exact dates, but the trauma can’t be locked in to history when you carry it with you; it becomes kind of timeless.”

In fact, a lot of things about these covers are deliberate—not just the numbers written on each case file snapshot. Sook continued to highlight the process he underwent with each piece: “Covers should be instantly impactful and visceral in communicating an idea or concept. That’s not more, or less, pressure but it is different [from interiors] because your focus changes. I still want to tell a story with that one image but don’t want to lose sight of the visual impact it should have. I’m gathering many elements of a larger story and arranging them on a single canvas in a way that hopefully accomplishes that.”

The covers themselves fall in line with the gravity and heaviness of HEROES IN CRISIS’ theme, which Sook also kept in mind. “It is my intent for each cover that I do to be as suitable to the material it’s wrapped around as possible. So every image then is influenced and directed by what I am dealing with. I want to connect with the tone of the material in color and technique for that to work. It’s instinctive more than anything,” he said. “The tone of this book is hopeful overall. But only after getting through the dregs, as it were. So for these covers, these moments that I’m handling, we’re looking at a snapshot of the horror.”

Following Sook’s depiction of the death of Superman on the cover of issue one, Sook’s subsequent HEROES IN CRISIS variants will focus on Batman’s back being broken by Bane for issue two, Wonder Woman killing Maxwell Lord for issue three, Aquaman losing his hand for issue four, Jason Todd’s death for issue five and Hal Jordan killing Kilowog for issue six. Issue seven will feature a special yet-to-be-announced Harley Quinn moment to round out the series. All of Sook’s variants in this series will receive a spot varnish treatment to give a photo-finish shine to each case file snapshot.

HEROES IN CRISIS #1 will hit shelves 9/26 with a standard cover by Clay Mann & Tomeu Morey as well as all four variant covers shown here.