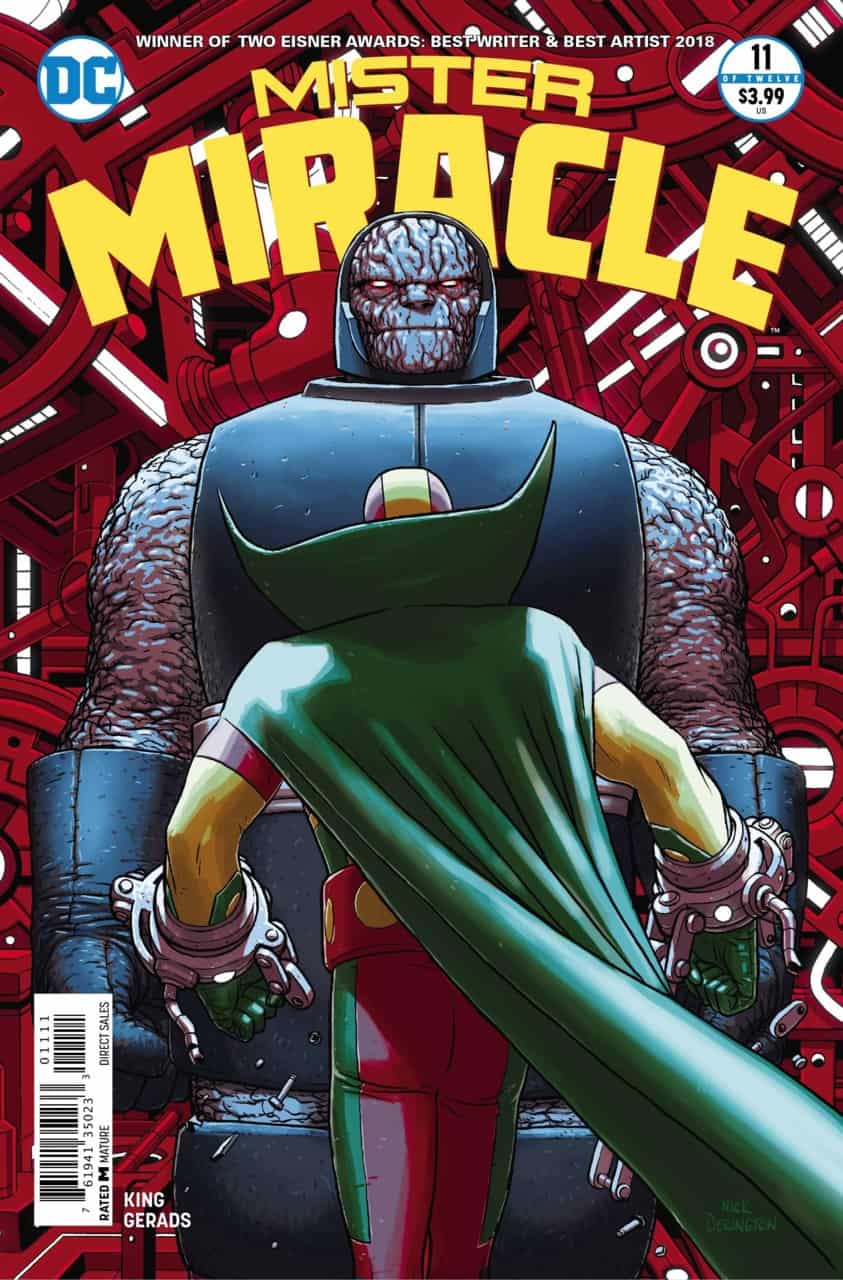 Mister Miracle #11 – We have been building towards this day – Scott and Barda have no real choice but to take their one year old son Jake to Darkseid.  Are they really going to hand him over in exchange for peace? More importantly, does Darkseid really snack from a veggie tray? This is another terrific issue, as Tom King takes a bit of a swerve at the very end, promising some unexpected stuff in the next, last, issue.  I’ve really enjoyed this series, and while it’s been having a hard time keeping on schedule now as it nears the end, I don’t mind, because I really don’t want to see it finish. The Eisners given to Tom King and Mitch Gerads this year are very highly deserved. This has been a wonderful project.

Black Badge #2 – The Scouts are in Siberia on an extraction mission, but just as they are about to begin their work, they come across another group – Young Canadian Mounties – who, like them, might be more than they seem at first glance.  Matt Kindt and Tyler Jenkins are having fun with this concept (that teenagers are recruited as black ops specialists disguised as Boy Scouts), and are providing us with some great comics. 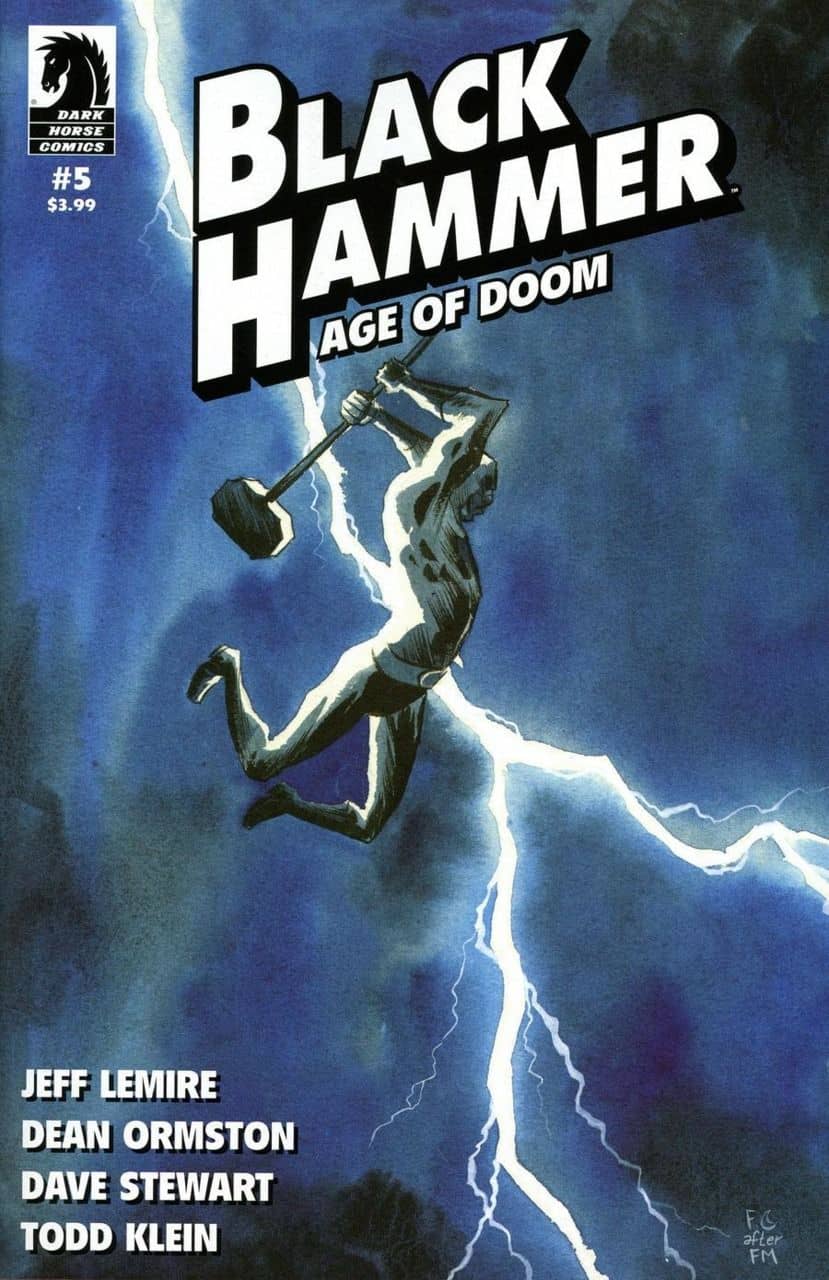 Black Hammer: Age of Doom #5 – Everything is explained in this issue, as the heroes discover just why they’ve been trapped on a farm for a decade.  It feels like this book is going to be ending soon, and it’s moved so far from it’s original premise, but I still find each issue to be pretty great.  Jeff Lemire’s put together some interesting takes on classic character tropes, and Dean Ormston’s art is perfect for this project.

Crude #6 – Steve Orlando and Garry Brown’s excellent miniseries comes to its big conclusion, as Piotr confronts the man who is ultimately responsible for his son’s death, and who is behind so much of the misery in a remote Siberian natural resource town.  This series, which began as being about revenge, becomes so much more towards the conclusion, as Piotr is forced to face truths about his son he never knew about, and to explore what matters most to him. It’s tragic, in that father and son never had any clue about who the other was, and I like the way Orlando allows Piotr room to redeem himself.  This conclusion is a pretty satisfying one, to a great series that avoids easy characterization. Orlando’s non-DC work is really amazing.

Days of Hate #8 – We are two third of the way through this series, and while this issue has no real action in it, it does progress the plot, as a resistance cell works to undermine the US government, thinking that they are playing a high ranking agent.  The truth is, both sides think they have things under control, although it’s becoming next to impossible to tell who is really winning. Maybe Ales Kot’s point is that no one wins when things get this bad? This series shows us how bad things could get in a post-Trump America, and that makes it kind of terrifying.  It’s also gorgeous, thanks to Danijel Zezelj, and remains the most focused thing I’ve seen Kot write.

Death or Glory #5 – The first arc is over, as Glory has to confront her ex-husband, and do her best to get a new liver into her father.  I was a little unsure of this series because it seemed to quickly stray from what I expected it to be, but by the end of the issue, when everyone’s on the road, it became much more of what I’ve been hoping for.  I’m looking forward to the next arc, and more of Bengal’s dynamic artwork.

Multiple Man #4 – I’ve been enjoying Matt Rosenberg’s Multiple Man, which has had Jamie jumping about in time and facing off against an evil future emperor version of himself.  Most of this issue looks at the allies he’s had – various versions of himself who are also mashups of other popular characters like Cable, Warlock, Deadpool, Wolverine, Cloak, Doctor Strange, and the Hulk.  This time around we see how these guys all got their powers, and return to the beginning of the series in a time loop that hurts my head a little, but which also has me looking forward to the conclusion next month.

Seven to Eternity #11 – Rick Remender can be inconsistent on this book, which is the most sweeping and involved fantasy comic he’s ever done.  This issue is rock solid, as Garils, the Mud King, finds his powers restored just as he and Adam Osidis, who is seen as a traitor by his former companions, find themselves the prisoners of Garils’s bastard son.  Jerome Opeña is doing the work of his career on this comic, making bizarre creatures and worlds completely believable, while also conveying so much emotion in their discussions. I felt my interest in this book starting to wander for a little while, but now it’s back.

Star Wars #54 – As the Rebel Alliance faces certain defeat, Leia finds a way to restore control of the Rebel fleet, even with Vader closing in on her.  This is another exciting issue in a great arc, although I’m getting a little tired of the forced references to the Rogue One movie that everyone keeps making since Kieron Gillen took over.  Still, this has been a very strong arc.

Return of Wolverine #1 – I want to make it very clear that I would have been perfectly happy to buy this book, had Marvel not preluded it with four miniseries and two one-shots, most of which I haven’t read yet.

Star Wars: Lando – Double or Nothing #5 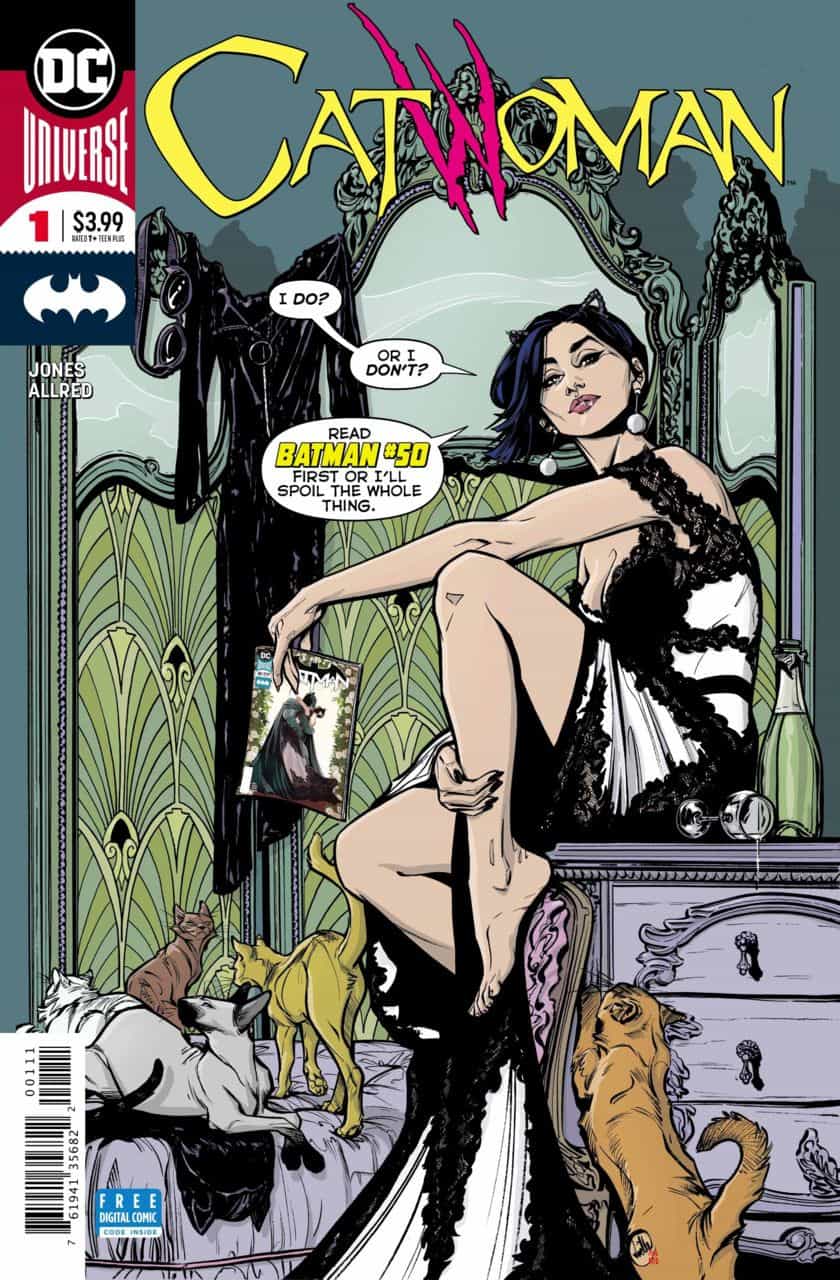 Catwoman #1 – Joelle Jones starts this series off beautifully.  Her art is gorgeous, and very reminiscent of Paul Pope in approach and sensibility.  I like the idea of Selina being in a new place and away from all the usual Bat-baggage (although she’s not really away from it at all).  This debut makes me want to continue reading this series.

Infinity Wars #1&2 – Well, it looks like so far Infinity Wars could be subtitled Civil War III, as it appears to be about a bunch of heroes arguing and fighting over the Infinity Gems/Stones, without making clear what the larger threat is.  I don’t know, this event has lovely Mike Deodato art, but it feels like a rehash of past events, with minor differences. We already know there’s no way that the major death revealed at the end of the Prime one-off is going to stick, nor is Gamora’s turn as a bad guy.  I also don’t see yet why this needed such a big build-up. At the same time, there is part of me that thinks these big events are still a little cool, which is why I’m still reading it. I guess comics fans never fully grow up.

Peter Parker the Spectacular Spider-Man #306-308 – Chip Zdarsky wraps up his alien AI storyline in the first two of these issues, and then gives us a very touching story about the Sandman’s last days.  I’ve liked Zdarsky’s Spidey, but of course his time on the book is wrapping up. Chris Bachalo’s art in issue 308 is among the best of his long career. There’s a lightness to it I haven’t seen from him in years, even though he’s illustrating a sad story.  Gorgeous.

X-23 #1&2 – I was really enjoying Tom Taylor’s All-New Wolverine, and wasn’t that happy to see it end.  Mariko Tamaki brings Laura back to her roots – she’s going by X-23 again (for no discernible reason other than the fact that regular Logan is coming back), and her stories revolve around cloning again.  These first two issues are as much about the Stepford Cuckoos as they are about Laura and Gabby, and I think that might be a mistake, as it doesn’t give the book space to establish itself. Laura never really got along with the Cuckoos, but their actions here don’t fit with how I’ve always pictured them; Bendis did some terrible work on them, and it feels like they’ve been ruined.  I am happy with Juann Cabal’s art on these issues; that’s a reason to come back for more.