If you’re looking to raise a little hell during New York Comic Con, we may have just the ticket…

Constantine: City of Demons – The Movie is a full-length, R-rated original animated movie that brings the dark and often disturbing world of the trenchcoat-wearing magician back to the screen. Spinning out of the acclaimed CW Seed digital series and featuring the voice of Matt Ryan as John Constantine, Constantine: City of Demons – The Movie completes the story and features an hour of never before seen footage. The movie is out on Ultra-HD Blu-ray, Blu-ray and Digital HD on October 9th, but if you’d like to see it before then…well, then you’ll need to get to New York.

Warner Bros. Home Entertainment will host the World Premiere of Constantine: City of Demons – The Movie at 7 p.m. on Thursday, October 4 at the AMC Empire 25 (234 West 42nd Street, New York). Best of all, the screening is free and open to fans…and you don’t even need a NYCC badge. You DO, however, need to request tickets. Here’s how that works.

You must RSVP for the premiere via email to ConstantineNYCC@gmail.com. Do this as soon as possible because ticket requests will be fulfilled on a “first come, first served” basis. If you’re successful in obtaining tickets, you will be notified via email by Monday, October 1.

Your RSVP email MUST include the name of the entrant, number of tickets being requested (limit four per entry), and a valid email address that’s written in the body of the email. Please enter only once, and do not enter if you cannot attend. Here’s an example of exactly how the body of the RSVP email should appear:

We hope to see you there, but please note that Constantine: City of Demons – The Movie is 90 minutes long and is rated R for bloody violence/gore, disturbing images and some sexual content. No one under 18 will be admitted without a parent or guardian. 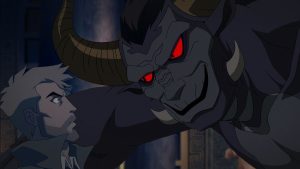 A panel in the afternoon and the World Premiere at night? Now that’s some powerful magic!