Despite Firing Of Writer & Director James Gunn, Disney To Use His MCU Film Script For Upcoming Marvel Guardians Of The Galaxy Volume 3 Movie

Despite Firing Of Writer and Director James Gunn, Disney To Use His MCU Film Script For Upcoming Marvel Guardians Of The Galaxy Volume 3 Movie. 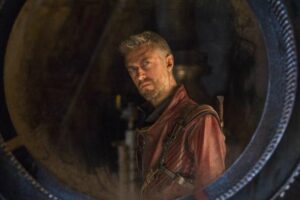 A phone conversation with Tulsa-bound actor Sean Gunn lasted 22 minutes. Post-chat opinion: You can trust him to keep a secret…

…Gunn played Kraglin, Yondu’s Ravager pal, in the first two films. Did you know this? Gunn also played a role in bringing Rocket (don’t call him a raccoon) to life.

Bradley Cooper voices the character, but Gunn is the on-set Rocket, squatting (ouch!) close to the ground to simulate Rocket’s height. That gives the other actors a person to interact with instead of, for instance, a tennis ball on a stick. Gunn’s movements (primarily face and hands) are used by the special effects crew to create the animated Rocket.

“We really just kind of stumbled into that process from the first movie,” Gunn said. “We weren’t sure how we were going to create that character, but it turns out that’s what worked, so we stuck with it and we are now four movies deep working in that process.”

The four movies include Rocket appearances in “Infinity War” and, because he survived that one, “Avengers 4.” Will Rocket return in a third “Guardians” movie? Will there be a third “Guardians” movie? It was put on hold after James Gunn, Sean’s brother and the writer-director of the first two films, was released due to long-ago social media activity.

Said Sean Gunn: “I don’t really know yet what’s going on with ‘Guardians 3.’ I know that Disney still wants to make the movie. I know that they have every intention of using the script that my brother wrote. Obviously, that was a very unfortunate situation for everybody, most of all him, but I am also somebody who had been preparing to spend half a year making that movie and now that’s up in the air. (emphasis added)

“Obviously, I think it’s a tricky proposition for them to find another director to step in — and also the scheduling of a lot of other actors who are incredibly busy can’t be easy. But I know that they plan on making the movie. I had not been contacted at all for a while, but I was recently contacted by Marvel saying, ‘Yeah, we do plan to make this movie. We’re just not sure when yet.’ ”

“Honestly, that’s really what I cared about more than anything with all of this,” he said. “I don’t want the fans to be deprived of something that they really love and really want. I go and I do these conventions and a really striking thing to me … is fans are basically split into two camps. There is one group that is super supportive of my brother and range from sad to angry about what happened. And then the other half are people who don’t know and don’t care. They just want to see the movie.”

Gunn said he was touched by post-firing support for his brother, and he knows his brother appreciates it, too. Gunn was especially touched by statements of support from “Guardians” cast mate Dave Bautista, who plays Drax.

“Dave wears his heart on his sleeve and has shown that he was really angry about everything that went down,” Gunn said. “I love that about him. He is a no-nonsense guy. That’s who he is.”

Earlier in the conversation, another attempt was made to squeeze a secret out of Gunn. (And, really, wouldn’t you rather be surprised?) Here goes anyway: People who saw “Infinity War” had no way of knowing if Kraglin was dead or alive.

“I think I can say this: I don’t think Kraglin’s story is finished yet. I think the fans will, at least, get to know what happens with Kraglin, even though I can’t share that right now.”