Back before there was a thing called the internet that had streaming video, life was rather complicated if you were a music fan that wanted to see you favorite band in their heyday. Even when home video happened, you were completely at the mercy of a mom and pop rental store that their purchaser had good taste. You’d drive around and poke through a small shelf marked “music” with the hope that scant boxes had something beside the usual suspects. What about just buying them? The average VHS rental tape sold for around $100. One tape could equal 25 used vinyl albums at the Record Hole. One day we hit pay dirt when we found Yessongs. This captured the Prog Rock Kings at their peak after the release of Close to the Edge album. We were thrilled to hear them on a old box TV with a single speaker. But now I’m extra excited because Yessongs is getting upgraded to Blu-ray. Now you can watch them huge as they sink deep into “Yours Is No Disgrace.” The Bluray arrives October 19. Also coming out is Glastonbury Fayre: 1971 The True Spirit of Glastonbury that was made by Nicholas Roeg who directed The Man Who Fell To Earth with David Bowie and Performance with Mick Jagger. The festival line up includes Terry Reid, whose band stole the show in the documentary Groupies. Arthur Brown’s band looks freaky. There’s also Melanie: For One Night Only that featured the woman singing during the scene in Boogie Nights when Rollergirl helps Dirk audition for Jack. Here is the press release from Screenbound International:

MELANIE – For One Night Only (Available Now) [DVD]

Based in the U.K., Screenbound emerged from various U.K. distribution, production and DVD companies founded in 2003 by Alan Byron. In 2015, the companies were all brought under the Screenbound brand, and the international sales and distribution arm – Screenbound International Pictures – was launched to represent a classic film library of over 500 titles.

“We’re delighted to be working with a specialist distributor such as MVD,” said Byron. “While they succeed with many genres of film and music, at their core is music video and that’s exciting.”

“We are honored to be working with Alan and Screenbound, and so pleased to be launching with some absolute classics in the music video genre,” said Ed Seaman, COO of MVD Entertainment Group.

MVD will represent the following titles for US distribution… 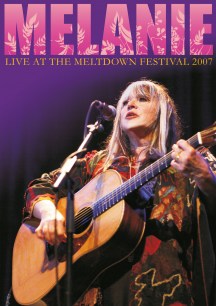 Melanie – For One Night Only
The first ever release of a Melanie concert on DVD.

Jarvis Cocker sent Melanie a special invitation to open the Meltdown Festival at the Queen Elizabeth Hall, London in June 2007. This DVD showcases that intimate evening’s performance from a unique songstress who sings all of her hits including Brand New Key, Beautiful People, Peace Will Come, Hush A Bye, Ruby Tuesday, Alexander Beetle and many more.

Yes – Yessongs
YES has always been regarded as a unique rock group and progressive rock legends. Never afraid to innovate or draw their inspiration from music that traversed the spectrum from symphonic to rock, YES has been at the forefront of progressive rock and became a major force in popular music selling over 30 million albums and reaching platinum status multiple times worldwide. During the late 1960’s YES were renowned for their live performances culminating in their seminal album and film of the same name, YESSONGS. Filmed in 1972 at London’s Rainbow theatre, this feature film was released theatrically in the UK the following year with a quadrophonic sound track. The film features their new line-up of the time Jon Anderson, Chris Squire, Steve Howe, Rick Wakeman and Alan White.

Glastonbury Fayre: 1971 The True Spirit Of Glastonbury
First ever Blu-ray release of this cult music film / rockumentary that established Glastonbury as the UK’s main festival

Shot by acclaimed director, Nic Roeg, Glastonbury Fayre is an enthralling music film of the first Glastonbury festival to have the pyramid stage. Free to all and with a line-up that included Melanie, Terry Reid, Family, Fairport Convention, Traffic, Linda Lewis, Arthur Brown, the true spirit of Glastonbury is there for all to see in this unique film record. Thousands of flower-power children smoke pot, dance naked, roll around in the mud and dance for peace in our time.