Sean Gordon Murphy Returns to Gotham in Batman: Curse of the White Knight

The Sequel to DC Comics’ Smash-Hit Batman: White Knight Arrives in 2019 & Introduces Azrael to the “Murphyverse”

Sean Gordon Murphy has a damn-impressive artistic resume, lending his unmistakable line-work to collaborations with Grant Morrison (Joe the Barbarian), Scott Snyder (The Wake), Rick Remender (Tokyo Ghost) and Mark Millar (Chrononauts). He’s perhaps the only person in the business known for executing compelling car chases, and for actually enjoying the art of drawing cars. In 2012, Murphy staked his claim as a writer/artist in the black-and-white pages of Punk Rock Jesus, and last year, he catapulted himself to the top echelon of Batman creators with the wildly popular Batman: White Knight. The eight-issue series, retroactively enveloped by DC Comics’ mature-readers Black Label imprint, imagined an alternate Gotham in which the Joker went sane—and helped expose to Gotham just how insane it is to let a grown man in a bat costume operate outside of the law. Featuring expert redesigns of Batman’s rogues gallery, intriguing new twists to familiar faces and the most sympathetic portrayal of the Joker…ever…White Knight flew off the shelves to become one of the past year’s best-selling and most popular series.

Today, Paste has the distinct pleasure of confirming what we all knew was coming: the next installment in the burgeoning “Murphyverse.” Arriving in 2019, Batman: Curse of the White Knight picks up where Batman: White Knight left off—and re-imagines a ‘90s Bat-favorite in the process. That’s right folks: Azrael is back, like you’ve never seen him before. To celebrate this announcement, and the collected edition of Batman: White Knight hitting shelves in early October, Paste exchanged a few questions with Murphy via email, covering everything from hot-button politics to a Harley identity crisis. We’ve also got the exclusive first look at Murphy’s promotional artwork for Batman: Curse of the White Knight (be sure to click through to see it in all its wallpaper-ready glory), along with DC Comics’ first official synopsis for the series. Check that out below, and stay tuned to Paste for more news on Batman: Curse of the White Knight as it’s revealed.

In this explosive sequel to Sean Murphy’s critically acclaimed blockbuster BATMAN: WHITE KNIGHT, the Joker recruits a savage partner to help him expose a shocking revelation about the Wayne family’s legacy and run Gotham into the ground. As Batman rushes to protect the city and his loved ones from this corrupt conspiracy, the mystery of his ancestry unravels and deals a devastating blow to the Dark Knight. Exciting new villains and unexpected allies will clash across history in this unforgettable chapter of the WHITE KNIGHT saga—and the truth about the blood they shed will shake Gotham to its core! 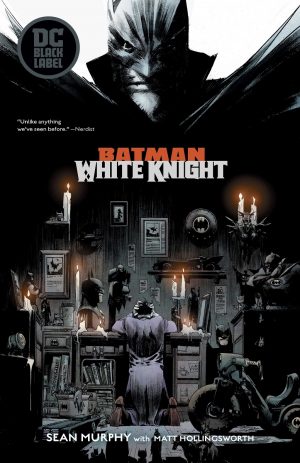