Does Dynamite Entertainment Have A Presence At New York Comic Con 2018 (NYCC 2018)?

At press time, we have seen no information about Dynamite’s attendance at NYCC 2018, but there is a news release from their NYCC 2017 attendance.

The NYCC website wasn’t much help either per the below search. 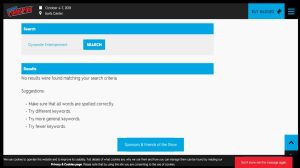 What is up with Dynamite this year?

After reaching out to Dynamite, they confirmed that they will not have a presence at NYCC 2018, but plan to be at NYCC 2019 which coincides with Vampirella’s 50th anniverasary.

She first debuted in September 1969’s Vampirella #1 (above).