Dean is interviewed to start the show about being disloyal to the Shield and if there’s any truth to what Drew and Dolph said. He says there was truth – both others are champions and he has nothing. He was a champion and replaced pretty quickly by Jason Jordan. Dean says people are waiting for him to turn on them at the perfect time, however, he will stand by his brothers. Baron says that his team fell short last week, and he’ll give Dean a chance tonight. He can either face Seth for the IC Title, Roman for the Universal Title, or he can face Braun. Dean says no to all of those – he wants Baron, but Corbin gives him Braun. They have a great back and forth match, with Braun massacring him – but missing big charges and eating dives. Braun lands two powerslams, but Roman comes down and Superman punches Braun for a DQ. Baron makes Seth vs. Drew tonight, while Roman faces Dolph now. 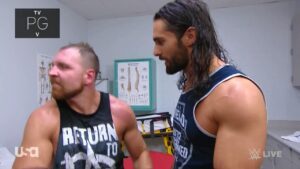 Dean gets iced down and is pissed about being DQed. They argue a bit before things end and we go to Dolph vs. Roman. It’s seemingly a title match, but Baron nixes that and says both matches tonight are non-title and the Universal Title won’t be defended until Crown Jewel. Roman and Dolph have great chemistry here, with Dolph flying around for Roman who actually busts out a big boot. Dolph gets 2.5 off a sunset flip, but the spear ends it and Roman wins. The Bellas and Nattie hug while Ronda shadowboxes backstage.

Ronda tosses Ruby around to start, but Ruby kicks the weakened ribs. Ronda hits the Rowdy Buster and the armbar ends it. HBK will be on the show tonight and we get Gable and Roode out for a Roode singles match. Konnor beats him with a corner avalanche and a sitout dominator. Alexa talks about being disappointed meeting Trish and being amazed at her wrinkly eyes before being burped at and being charged $50. The Revival face the B Team, who win for some ungodly reason. They had SOMETHING in the Revival last week and just pissed every bit of it away. AOP comes down to demolish the B Team. Drake Maverick is out dressed more like his original black leather-clad Rockstar Spud character instead of either his goofy suits or his AOP cosplay gear.

Dean talks to Roman about how he could’ve been Universal Champion tonight – much like he could’ve been IC Champion if he opted to face Seth, but he’s too nice. A long recap of how bad breast cancer is airs. Dolph talks to Drew and Braun about this possibly being the last night of the Shield. Braun calls Dean tough before we go to Seth vs. Drew. Seth and Drew are unsurprisingly fantastic together, with Seth even hitting the falcon arrow on him for 2. Corner to corner buckle bomb to Drew! The superkick hits, but Dolph distracts and the Claymore kick gives Drew the win. Roman is down and gets beaten up. Dean comes down and gets massacred by everyone.

Elias is mad that his rider wasn’t followed and he throws the food at a stagehand before KO asks if he can grab a water. WWE 2K19 is hyped before KO and Elias are out. Elias gets unreal heat for insulting Seattle. The fans are so loud that KO can barely talk over them with a mic – it’s something to see. Lio Rush comes out looking like a palette-swapped version of Drake Maverick with his bright suit. KO faces Lashley and grinds away with arm and chinlocks. Lashley goes for the big suplex, but Elias bullies Lio and KO wins with a distraction schoolboy. They destroy Lashley and Lio.

Bayley faces Alicia in what is theoretically the main event of Raw. Belly to Bayley ends it. HBK comes out moving great, but looking much older than he is facially. Mayor Kane appears behind him and lays him out with a right uppercut. Kane and Taker stand over him before HHH comes down and they brawl. DX eats a double chokeslam and we see that HBK has now fully shaved his head. Wow. Taker tombstones HHH and the Brothers of Destruction stand tall on the ramp.