At press time WWE has released a preview for tonight’s Smackdown Live as per the below.

Less than a week before defending their SmackDown Tag Team Titles against The Bar at WWE Super Show-Down, The New Day will reveal Big E family’s secret, decades-old recipe for their famous pancakes!

SmackDown LIVE mixes in the Power of Positivity with the first-ever New Day cooking demonstration, tomorrow night at 8/7 C on USA Network! 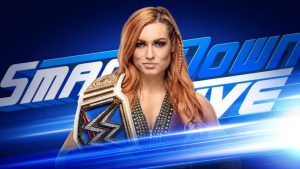 Ever since she captured the SmackDown Women’s Championship from Charlotte Flair at WWE Hell in a Cell, Becky Lynch has demanded that the spotlight remain on her at all times.

Now, five days ahead of her rematch against The Queen in Australia’s Melbourne Cricket Ground, Australia, WWE.com has learned that The Irish Lass Kicker has a very special Super Showdown Surprise that she will reveal on SmackDown LIVE.

Find out what the brash titleholder has in store for the blue brand en route to the Land Down Under, tomorrow night at 8/7 C on USA Network.

The full preview has now been released.

After Samoa Joe shocked and appalled the WWE Universe by showing up at the home of WWE Champion AJ Styles last week, SmackDown General Manager Paige announced on Twitter that she will kick off this week’s edition of the blue brand by addressing his frightening actions.

Will Joe face repercussions from the SmackDown LIVE GM? And will The Phenomenal One look to hunt down his adversary four days before defending his title against Joe in a No Disqualification, No Count-Out, No Rules Match at WWE Super Show-Down, where there must be a winner? 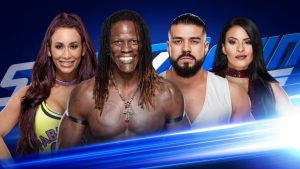 Despite hosting a thoroughly entertaining and unpredictable edition of “Truth TV” last week, The Fabulous Truth came up short in the squared circle. First, R-Truth lost a one-on-one contest against The Miz, bringing a swift end to his new show, and Truth & Carmella were later defeated by Team Awe-ska in their first WWE Mixed Match Challenge Match.

In the wake of The Fabulous Truth’s misfortune, Zelina Vega ignited a firestorm on social media by tweeting that the unlikely duo were “losers.” In response, The Staten Island Princess challenged Zelina & Andrade “Cien” Almas on behalf of her tandem to a Mixed Tag Team Match on SmackDown LIVE. 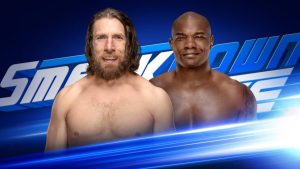 Believing that he is not being given the chance to showcase his talent on SmackDown LIVE, a frustrated Shelton Benjamin tweeted SmackDown General Manager Paige to ask for an opportunity.

In response, SmackDown’s General Manager has announced that Shelton will indeed compete in a primetime matchup when he goes one-on-one against Daniel Bryan tonight at 8/7 C. Yes! Yes! Yes!

Smackdown Live including setting up the blue brand matches at Super Show-Down including A.J. Styles vs. Samoa Joe…

…Daniel Bryan vs. the Miz…

…the IIconics vs Asuka and Naomi…

…the New Day vs the Bar.

WWE Super Show-Down 2018 is this Saturday.