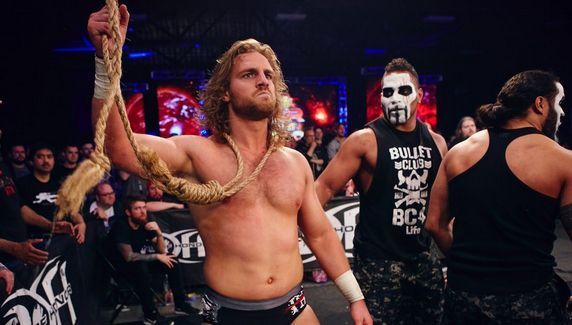 Bullet Club standout Adam “Hangman” Page has been all the talk of the “dirtsheets” lately with word circling that none other than the WWE reached out to the Club’s youngest member. And Page turned them down for maybe one of the most heartwarming reasons you’ll hear about this week in pro-wrestling.

Page reportedly is not going to WWE simply “because it’s not the group and the group’s sticking together.” This news comes on the heels of the latest Being The Elite, where in the episode, the Young Bucks give Page a pair of cowboy boots as a present with a note that is signed, “Nice Try. If you want to be an assassin try being more cerebral. – H”. Teasing, of course, that the boots could be from WWE/Triple H in an attempt to sign him. The episode ended with a tease that the members of BTE’s contracts would be coming up at midnight on New Year’s Eve. Cody then mentioned that they may go, “Double or nothing,” which could be another allusion to ALL IN 2.

Page also contributed to this story himself when he sat down with CBS Chicago to discuss the future of Bullet Club.

“I think as a collective, as a group, we have been able to change wrestling,” Page said. “We were able to … I mean this wasn’t my money. I didn’t self-finance ALL IN but my friends were able to self-finance and sell-out a show that had over 11,000 people in attendance. I don’t even know what the numbers were who watched it from home. It is something that’s just absolutely unheard of. And it’s something that we all did together.

“I think, as a group, we are really on to something, and I think we wanna continue this. It would be a real disservice to everyone who has supported us and got us to this point if we were to abandon what we’ve built. It certainly doesn’t mean it can’t evolve and change, and it should, and it will. But I feel like we have too much of a good thing going to try to abandon it. And we all know that collectively we have more leverage than we ever had. More than anyone else has had in a very long time.”

“I think what we’ve built is not necessarily bound to where we work,” Page responded. “A lot of what we built, and really, I feel like the most feedback that I get is from doing stuff with Being The Elite, which could conceivably happen anywhere. It could happen … You catch my drift. So I don’t want to, at any point, rule anything out. If you kinda catch my drift on that one.”