A recap of last week’s show alongside the OGz burning a Konnan match starts things off. Rich Swann faces Matt Sydal in the opener, and Sydal works a far more cunning style here – including a spot where he hides under the ring. Sydal goes for the pop-up rana, but Swann front flips out of it! Swann waffles him with a superkick and goes for a pop-up rana, but Sydal powerbombs him for 2.5. Swann hits the spinning back kick, but a big guy powerbombs Swann off the apron into the ring and Sydal hits an inverted Angle slam to win. Ethan Page, who was Joseph Park’s cousin in Impact last year, is Sydal’s new goon. Jake Crist and Sami meet with Dave Crist, who is all paranoid now. 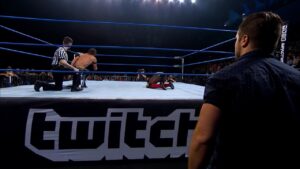 Moose threatens Eddie over the phone with Alisha’s phone. Scarlett Bordeaux walks out looking hot. Don and his pink shoes help her up the steps to the announce table. Scarlett calls Don a 10 and Josh a 5 and she says she wants to manage a champion. Eli comes out to face his next challenger – AAA’s version of La Parka. They have a nothing match and Eli leaves when Pakra threatens him with a chair. Backstage, LAX and the OGz bicker with the OGz messing up their game and their belts – but LAX not retaliating to avoid nixng the cease fire. Sydal talks about Ethan Page listening to him while Swann wouldn’t.

Murder Clown comes out with Katarina to face Joe Hendry, with Grado. Don calls Grado the fat idiot before Joe mocks the heels with a music video. Murder Clown works like a monster while Josh talks about Grado’s Louis Vutton fanny pack. Murder hits a clonking blow and wins with a falling sofa splash off the second rope. He does another one and puts him through a table. Eddie and Moose meet and the audio mixing is terrible, because the building they’re in is echoey and they’re playing music over the dialogue. Kross comes in and Eddie escapes with Alisha by using the kendo stick. He calls Johnny and tells him to take Aries out now because he’s alone.

Johnny walks around the building looking for Aries and Aries comes down and says he suffered nerve damage to his arm and a concussion from the belt shot last week. Plus, he twisted his ankle AND he has a bad back! Aries says at BFG, it will be one-on-one because he doesn’t need anyone to beat him. He knows he is, but he isn’t sure if Johnny Impact, Johnny Mundo, Johnny Survivor, John Hennigan, Boone the Bounty Hunter or Johnny Nitro knows who he is. Johnny’s a jack of all trades, while he’s a master of pro wrestling. Aries cheapshots him, but Johnny hits starship pain and sends Aries packing.

Cage says that he’s not talking for the Lucha Bros – but himself, and he’ll destroy OVE. BCW Motown Showdown on Twitch is hyped up for Sunday. Gama Singh beats up his charges backstage. Hogan vs. Sting at BFG 2011 is the GWN match of the week. A young guys flips in front of Scarlett before someone else in a tribal getup shows up and she leaves. Why are there no chyrons for these people when it’s a taped show and using another company’s stars? Petey shows her how to do the Canadian Destroyer, but Trevor gets jealous and she ends the Smoke Show due to this wackiness.

Fenix and Penta warn OVE that they came to their home to beat them, and they’re doomed. Kiera and Allie come out to face Su and a bridesmaid. Su beats Kiera with a panic switch after a palm strike and a distraction from the bridesmaid. Allie and Su brawl, but Kiera gets put in the coffin and we get some dramatic video with Allie afterwards. Taya tells Tessa that she will take out the bully at BFG. Cage and the Lucha Bros face all of OVE. Cage slams Sami down before moonsaulting on him and Fenix dives for 2. Sami hits a draping twist and shout before Cage comes in to German both Crists with Jake on Dave’s back. A giant cluster of a brawl ends to close the show.