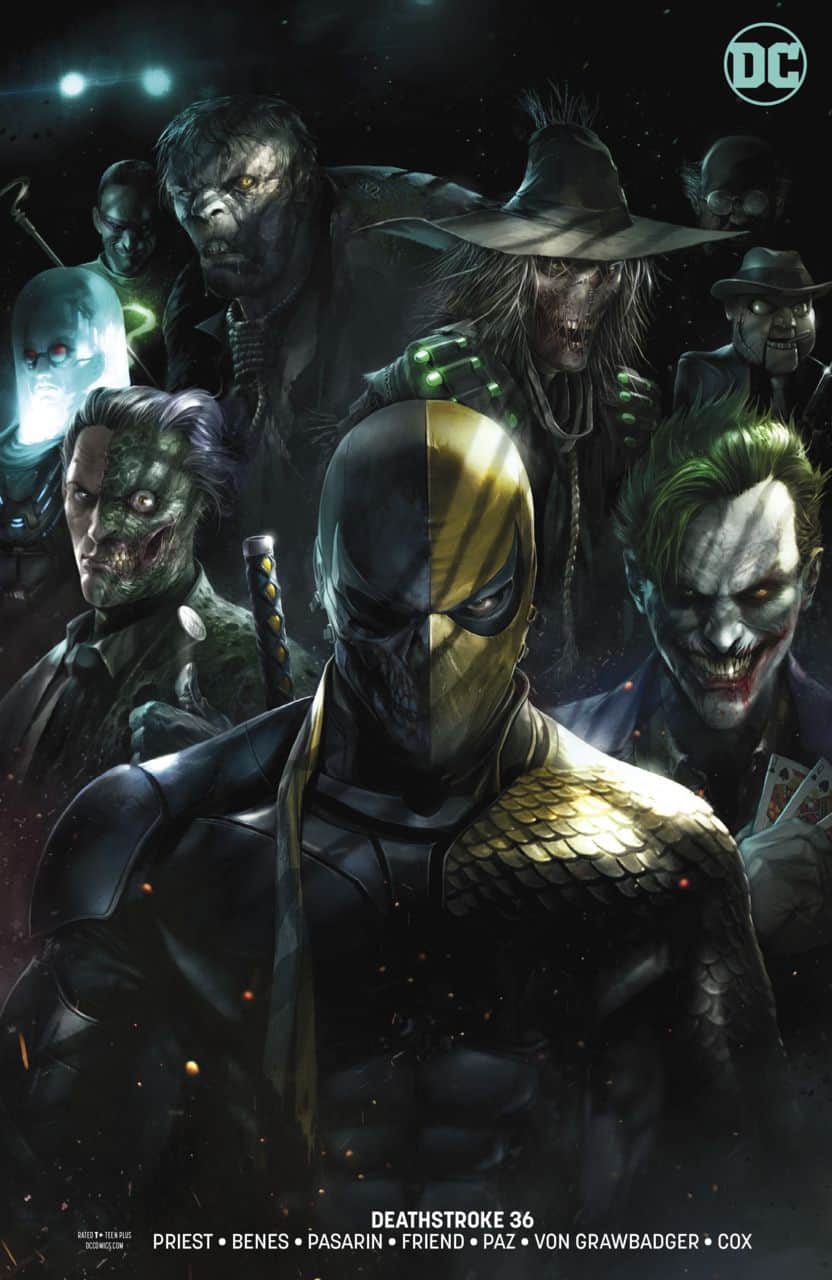 Deathstroke #36 – I’m so glad to be back in current continuity, as Slade finds himself incarcerated in Arkham Asylum, talking to the Wintergreen AI that may not even exist.  Writer Priest gives us an interesting look at life in Arkham, where inmates participate in group therapy via VR, and we meet a new character who has lived there for a long time, in between alien abductions.  We also revisit most of the supporting cast, as this book gets back on track. This is currently the only DC ongoing comic that I buy, and I love it.

Die! Die! Die! #3 – Robert Kirkman and Scott Gimple expand the scope of this series some, as we get a look at Connie, the woman who has been running black ops missions for ideological purposes, and get a better understanding of her philosophy, and some of her kinks.  We also meet some other operatives, as this book begins to sprawl some. It’s a fun parody with some real principles behind it, and artist Chris Burnham is given plenty of opportunity to cut loose and have some fun. It’s good stuff.

Paper Girls #25 – For a while in this issue, it looks like we are getting close to the end of the Paper Girls’ story, but then some other stuff happens, as Brian K. Vaughan and Cliff Chiang make some moves and renew the title for another arc, coming soon.  This book continues to showcase some of the best character work in comics, as both writer and artist work together beautifully to make each of these characters feel real and unique, while still telling an exciting and original story.

Star Wars #55 – This has been maybe my favourite arc of this Star Wars series, as it involves a lot of spaceship dog fighting, few droids, and no Jedi stuff.  The Rebels are finally able to push back against Vader’s massive attack, as Kieron Gillen clarifies where some of the Rebel leadership went between episodes 4 and 5, and we generally get to see some cool stuff thanks to Salvador Larroca.  I wish this series was always as good as it’s been lately.

The Umbrella Academy: Hotel Oblivion #1 – Were this not such a small week, I wouldn’t have picked up this comic.  While I’m a huge fan of the art (and writing) of artist Gabriel Bá, I’m not a fan of Gerard Way’s brand of Grant Morrison-lite writing.  It’s been years since I’ve read an Umbrella Academy comic, and I don’t remember much at all of the team and its adventures. This first issue of the new series didn’t do much to bring it back to me, either.  We check in on the various characters, who appear to have more or less gone their separate ways, but I’m not sure what this story is going to be about, and don’t find much reason to care at all. Bá’s art is great, of course, but I doubt it’s enough to make me want to return to this, unless I find the trade in a sale box in a few years.

The Walking Dead #184 – Rick and some of his people arrive in the Commonwealth just in time to witness a riot that has to do with Michonne’s stepping in to defend the security guards who beat a man to death last issue.  Robert Kirkman explores some interesting new themes in this issue, as we see just how the people of Alexandria react to a markedly different way of life than the one they’ve developed, and we as readers start trying to guess how it’s all going to turn bloody (because this wouldn’t be The Walking Dead if it didn’t).  I like this current arc, and find the social engineering aspects to be pretty fascinating. I also want to know if Eugene can get the trains running again – there’s always something cool in this comic.

Adventures of the Super Sons #3

Death of the Inhumans #4

Thor #2-4 – Honestly, I can’t remember the last time my attention wandered so much while reading modern comics.  Jason Aaron’s latest Thor relaunch features the traditional Thor Odinson back in his God of Thunder role, sporting a variety of new hammers and heading to Hel to help fight Sindr, who is working with Malekith.  Karnilla, Balder, Loki, Skurge, Valkyrie, and Thori all have roles to play, as do Hela and Thanos, yet I found myself generally pretty bored. I like Mike Del Mundo’s art, but often found it hard to follow, and just could not get engaged in the story.  It’s wild to think that, especially given how good Aaron was while working with Russell Dauterman and the female Thor. This, however, just did not work for me on any level.

Weapon H #1-6 – I’ve long admired Greg Pak’s writing, although he has been a little hit-or-miss in recent years.  This series spins out of the Weapon X title, and features a character who is a hybrid of Hulk and Wolverine (he often gets called Hulkverine, and in the era of Gwenpool, I’m really glad they went with Weapon H as the book’s title).  He is more Hulk than Logan though, spending the first few issues seeking solace, before getting roped into Roxxon’s own version of Stranger Things, with a gate to the Upside-Down (I mean Weirdworld) providing plot. Pak fills the book with some cool characters (a Brood-human hybrid, Man-Thing) and makes it all work.  It’s derivative, and the art in the early issues by Cory Smith reminds me way too much of Mark Bagley, but I’m curious to read more…

Web of Venom: Ve’Nam #1 – I don’t care much for Venom, and don’t read his series, but was intrigued by this one-off featuring some symbiote-wearing soldiers in Vietnam.  I love Vietnam comics and stories, and kind of expected this to be a little like Guerillas, the awesome series that has trained chimps fighting in the war. Instead, this is really a Nick Fury and Wolverine story that doesn’t do a thing to explore the moral ambiguity of the Vietnam conflict, or even the concept of sending in alien symbiote-wearing soldiers.  It’s all flash, without any substance to it.