HHH comes out in a new shirt, black jeans, and a jacket looking like he’s ready to join the TNA 2010 seniors tour. HHH is here to remind us of that time he scored four touchdowns in a single game at Polk High, and also rambles about mountains for a bit. A recap of the main event airs before HHH rambles about respect for a while. HBK says he’s honored his word out of respect for the Undertaker only to find that the Undertaker never respected him at all. HHH challenges the Brothers of Destruction for a match at Crown Jewel. Corey talks about how tonight will be a repeat of Super Showdown. 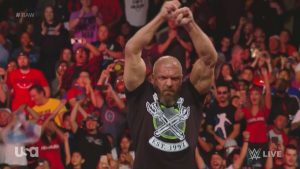 Lashley comes out with Lio Rush, who is out in slacks and a suit jacket without a shirt. Lashley’s out to face KO. Lio talks about Lashley during the match, which gets boos. Lashley dominates and gets low-bridged. Lio keeps burying KO and telling them to cheer for Lashley and then shows them how to properly do it. This is death for Lashley. KO hits a flip dive onto Lashley. Lashley misses a corner spear on the barricade. Lio’s giggle makes me want Matanza to sacrifice him to the gods. Lashley gets the post-break chinlock. I would think about watching Lio Rush: Backseat Uber Driver on the WWE Network. KO rushes after Lio, thus turning face to the entire arena.

A giant FIGHT OWENS FIGHT chant breaks out. Lashley hits a giant spinebuster and gets 2 off the big suplex. KO gets a stunner and a huge pop for 2. KO gets stuck in a tree of woe in the corner and Lashley attacks the knee and the yokosuka cutter wins it. Lashley clips the knee – so at least this cements all this being a heel turn. Okay, so now it’s definitely a heel turn and Lashley is doing Lio’s bidding. I dig that in theory. Lashley slams both knees into the post. Cena is announced for the Crown Jewel world cup. A global battle royal is announced for tonight to determine a world cup entrant. 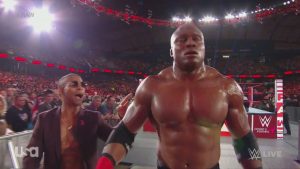 Team B and B talk about a Mixed Match Challenge rematch tonight. Thankfully, Lio interrupts this horrible promo by hyping up Lashley. Elias sings and trolls Chicago while burrying Australia and then Ronda just comes out for the tag match. Well that was awkward. Brie and Liv brawl for an ad break. Nikki disaster kicks Ruby after the break. Sarah and Nikki are in and Sarah lands a sliding knee for 2. Ronda comes in and taps Ruby with the armbar. Nikki and Brie attack Ronda after the match. 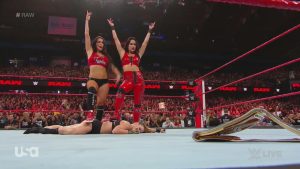 Bayley and Balor are out to face Jinder and Alicia. They do some stuff and Finn wins with the double stomp. The dogs of war meet backstage and Dolph says they’ll win it tonight. Drew says he’s tired of Dolph calling the shots and Dolph’s the one who lost at Super Show-Down. Jobbers are in the ring for the battle royal and then Corbin comes out and says he could’ve just put himself in the world cup – but instead, he’ll win this battle royal to do it. The Belgian Waffler needs to face Little Mac in a Punch-Out ROM hack. The Conquistador poses wackily and then rests on the floor. I hope the Conquistador unmasks to be an even fatter LA Park. Corbin wants the bell rung, but he doesn’t know the Conquistador was on the floor. TRIPLE GERMANS and he tosses him out. KURT ANGLE UNMASKS and does front flips shockingly well for nearing 50. This is the best Kurt has moved since he last did that stupid moonsault off the cage in TNA. 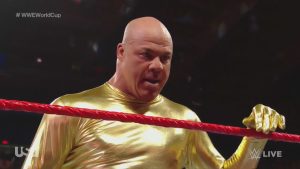 Kurt is interviewed and says it’s great to be back…but he’s still on vacation. Ember gets a jobber intro against Nia Jax. Ember gets a tope and then gets bowled over. BIG MONSTER CHARGE BIG MONSTER SMASH INTO OBJECT against the LED board on the floor. Ember wins by countout. Nia congratulates her on the win. Why did Nia not just destroy Ember there? Wasn’t she a heel the last time she was on TV against Ronda? 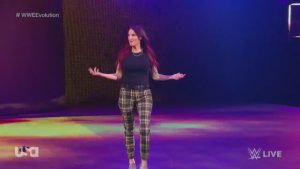 Trish comes out to cut a promo and says a few things before Alexa gives her false praise. Trish challenges her tonight before Mickie tells her that Chicago doesn’t deserve it and brings up beating Trish in Chicago. Mickie wants the Evolution match to be a tag match, so now Alexa vs. Trish is Alexa and Mickie vs. Trish and Lita. We get a vintage Shield promo about the match tonight. Roode and Gable are out to hopefully not lose to The Ascension. It’s astounding how much worse Roode is being used on Raw than he was literally anywhere in his career over the past 15 years. Gable and Roode win before AOP destroy them. Well, that win sure did Roode and Gable a lot of good. 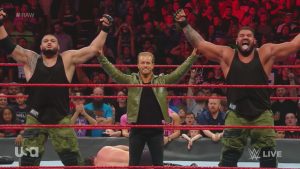 We get a Komen hype bit and then a recap of Ronda’s beating earlier. Ronda vs. Nikki for the title is announced. We get a Vintage DX recap of their ’06 run – which itself was them having fun with their ’97 run. Crown Jewel is hyped up before Heyman comes down to hype Brock and the legalized thuggery we will see in the main event. Heyman talks about Brock not watching this show, but instead he’ll be running a mile to the Death Clutch gym – a gym designed by him and it will allow him to be both Universal and UFC champions at the same time.

Roman and Braun start things off with quick shots. Roman gets the Samoan drop on Braun. Seth and Dolph come in and exchange finisher blocks before cradles get 2 and a buckle bomb hits. Suicide dives from Dean and Seth set up a deadman dive from Roman onto the pile. Drew boots Seth down for 2. Braun and Dolph argue before Drew sticks up for Dolph. Braun doesn’t look like much of a monster standing face to face with Drew. Dean goes for a suicide dive on Braun, who catches him, and Dean DDTs him. Claymore to Dean ends it. Dean leaves upset to further the tease of a Shield split. 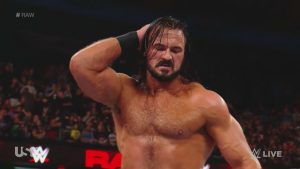