The Sage Force Revealed In The Wake Of The Strength Force and The Justice League’s Still Force Adventures!

We open with the origin story for Heat Wave…

…whose powers have been amped by the Sage Force!

The Flash and a cop are under siege by this uber-powered Heat Wave who is also has a fire-powere lady accomplice.

They go off to torch the city, but the Flash doesn’t pursue because…

… he realizes they’re in Heat Wave’s mind due to the Sage Force.

The Flash is still trying to figure out how the Sage Force works. 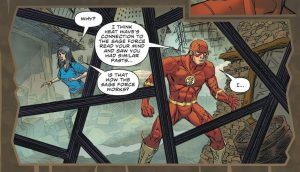 The real world Commander Cold has the cop, the Flash and Heat Wave away from Iron Heights; they’re sleeping effectively, but trapped in Heat Wave’s mind.

However, Heat Wave’s powers are flaring up even while he sleeps…