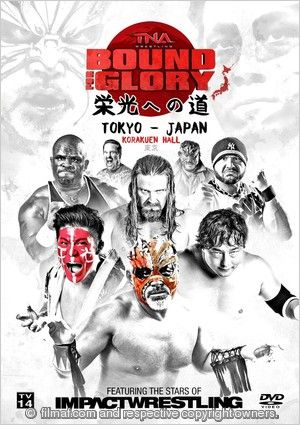 ~MATCH #1~
Minoru Tanaka defeats Manik at 9:52. These two have a similar style so it should be an interesting matchup. Tanaka tries to cut a quick pace in the opening minutes, but Manik intercedes and slows things down, keeping Tanaka on the mat. Of course Manik can fly too, and he busts out his high-flying offense as the match goes on. Both men bust out some creative maneuvers and both are having a hard time putting the other away. Finally Tanaka catches Manik with a stiff kick to the head, and then locks on a cross armbreaker to get the win. That was a great choice to open, and they kept the crowd energized though the duration. All their spots were connecting and both men came away looking good.
Rating: ***¼

~MATCH #2~
Ethan Carter III defeats Ryota Hama at 5:50. Hama’s thing is that he’s fat, like hella-fat, and he’s doing Rikishi’s gimmick. He does a lot of generic fat guy offense, and he can actually move around pretty decent. Don’t get me wrong, this match certainly blows. EC3 puts me out of my misery by hitting the 1%er to get the pin. That was a whole lot of nothing much.
Rating: *½

~MATCH #3~
MVP defeats KAZMA SAKAMOTO at 8:06. It’s all MVP in the early going, and SAKAMOTO has to seek refuge on the floor. Eventually SAKAMOTO does fight back and he gets in a token amount of offense before MVP puts him away with the Drive-By Kick. This was competently worked and not particularly exciting.
Rating: **¼

~MATCH #4~
TNA X Division Champion Samoa Joe defeats Kaz Hayashi and Low Ki at 10:31 to retain the title. Joe has been the Champion since 8.7.14, and this is his fourth defense. The action starts off at a fast clip, with the Champ looking dominant. Hayashi and Ki get their moves in too, and keep the match on the move both in and out of the ring. After a ton of strikes and counters and high-flying moves by all three competitors, Joe is able to trap Ki alone in the ring and he puts on The Choke. Ki passes out and Joe retains. This was classic non-stop X-Division action, the kind of match that the whole division was built upon. Good stuff.
Rating: ***½

~MATCH #5~
Jiro Kuroshio & Yusuke Kodama defeat Andy Wu & El Hijo del Pantera at 9:15. I pretty much have no idea who any of these guys are. Well, I gather that El Hijo del Patera is the son of Pantera, but I don’t know any more than that. Kuroshio wrestles with his ring jacket on. Tenay and Taz joke their way through this match, and they’re brutally unfunny. A bunch of stuff happens but who cares because none of these four guys have ever or will ever be in TNA so why is this match on their biggest pay-per-view of the year? Aside from that, this show was taped, just cut this match out, show a full Team 3D match or something. But this is no good. Eventually Kodama hits Hijo with a corkscrew moonsault from the top rope to get the win. This wasn’t terrible and had its moments, it just never should have been on this show.
Rating: **

~MATCH #6~
Team 3D (Bully Ray & Devon) defeat Abyss & Tommy Dreamer at 12:51 in a Hardcore Match. Dreamer and Abyss are teaming together here because reasons. For a Hardcore Match, they spend a lot of time dicking around in the opening minutes. These four men dawdle around and do very little of note until Team 3D hits the Whassup? on Dreamer. Then it’s time for tables and brawling on the floor. Everyone fights outside the ring for a while, and when they make their way back in, everyone has gotten some weapons out so there are a lot of options. Team 3D put Dreamer though one of the tables with a powerbomb. Abyss goes under the ring and finds a bag of thumbtacks. Of course that backfires when Team 3D is able to flapjack Abyss right on to the tack pile. Dreamer tries to cut in with a kendo stick, but he’s quickly flattened with a 3D and Devon gets the pin. What a terrible showcase for the newest TNA hall of fame inductees. Dreamer is terrible (always was), and he has no reason to be teaming with Abyss here other than they had no one else to put Team 3D against.
Rating: *½

~MATCH #7~
TNA Knockouts Champion Havok defeats Velvet Sky at 5:59 to retain the title. Havok has been the Champion since 10.1.14, and this is her first defense. Vevlet tries to attack quickly, and she lands a bit of early offense. Havok is able to cut her off and she begins methodically wearing Velvet down. Velvet makes one last hero comeback attempt, but Havok puts a stop to that with a bearhug, and Velvet taps out. That was a decent TV-style title match. Velvet Sky at no point was a threat to the title here.
Rating: *¾

~MATCH #8~
Great Muta & TAJIRI defeat James Storm & The Great Sanada at 10:53. Everyone is moving pretty slowly in the early going, with not a whole lot happening. Storm and Sanada isolate TAJIRI for a little while, and eventually Muta gets the hot tag. After some brawling TAJIRI is able to backdrop Storm to the entrance ramp. That leaves Sanada alone with the two Japanese legends, and he takes a simultaneous misting. TAJIRI then hits the Buzzsaw Kick, and Muta follows with a Shining Wizard to get the pin. That was strict formula stuff to hide Muta’s extreme limitations, and it worked well enough to be an adequate though unmemorable main event.
Rating: ***

A2Z Analysiz
If this was a “One Night Only” pay-per-view, I would be very impressed. The opener was quite good, the X Title match was very good, and the main event was fun. However, this wasn’t a One Night Only show, this was their version of WrestleMania, and in that regard it can’t be viewed as anything but a failure. The card wasn’t announced until days before the event, which was also taped due to being in Japan. The World Champion and the Tag Team Champions were nowhere to be found. Joe and Havok were defending titles they had already lost in reality but hadn’t aired on TV yet. So a few good matches aside, most if this show is a good example of the stunning ineptitude of the company as a whole.