We get a recap of the terribly-acted Moose hostage stuff from last week and the Aries-Impact promo alongside Ethan Page’s debut as Ethan Page. Trevor Lee is out to face Jack Evans, Puma King, and Petey Williams. Don Callis talks about Evans being in Mat Rats while Josh brings up his run in WSX. Everyone teams up on Lee for a bit, but Trevor takes him down with a sidewalk slam/backbreaker. Petey goes for the la mistica legsweep and turns it into a Destroyer to win. This would’ve been right at home as a random X division opener for the PPV. Rich Swann hypes up his partner as someone who is on the same level as him – Willie Mack! He gets an okay hype video, but nothing that makes you care about him. 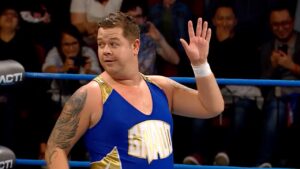 Grado comes out and Don talks about the gate being left open at the institute. A recap of Murder Clown destroying Joe Hendry airs before Maximo comes out to face Grado. Grado and Maximo have a pose off before Maximo goes for the forced kiss – but Grado avoids it. Maximo eventually gets the kiss and wins via schoolboy. Johnny, Fallah, and Eddie have a chat and plug Johnny’s movie. A recap of the LAX-OGz war, including poor Little Richie getting hit by a car, airs. A Madison and Tara vs. BPs tag match is the GWN match after the recap of gang warfare involving a kid being hit by a car. A Cage and Lucha Bros. vs. OVE video airs. Eli Drake sings “New York, New York” before Gama Singh introduces the Desi Hit Squad. He forces them to wrestle each other in a match that is so much deader than even the average 205 Live show. Raju wins and stays in the group.

Johnny Impact, Eddie Edwards, and Fallah Bahh are out to face Aries, Moose, and Killer Kross. There’s just a ton of things to this, with Fallah being a babyface in peril forever. Johnny and Aries have good chemistry together, with Johnny escaping the last chancery. Eddie gets apron bombed by Moose and Aries beats Johnny with the brainbuster. Allie meets with the Sinister Minister and he tells her she’s walking around as half a human – but she has to leave her soul to the undead realm. They will meet at BFG and she will have to go to the undead realm there.

Keyra is out to face Tessa Blanchard. Keyra goes for a rana to the floor, but Tessa running powerbombs her into the post!Tessa lands a draping flatliner and wins with the buzzsaw DDT. King and Konnan lead the LAX-OGz summit and cut some damn good promos. King says in his city at BFG, the OGz will end LAX and he’ll take out Konnan. Hernandez does wacky poses for a bit to at least shine somewhat. In a show-closing BFG hype video, Aries says that Johnny cares about his wife – and that will be his downfall, as he only cares about being Impact World Champion.