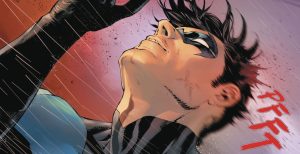 Despite Arsenal / Roy Harper being dead, it is possible that the Flash / Wally West is still alive (spoilers here). However, Barry Allen / the Flash believes Wally is dead and this will play out in January 2019 (spoilers here).

With that, let’s get back to Green Arrow #45 where Oliver Queen and friends mourn the passing of Roy Harper aka Arsenal.

We open at a funeral in modern day with the flashbacks.

What’s interesting is that Arsenal teamed up with Green Arrow recently. Roy wanted to tell Oliver about some concerns he had about Sanctuary, the sobriety centre for struggling heroes set up by Superman, Batman and Wonder Woman. Oliver was to busy with the case to discuss with that Roy wanted to discuss, but promised they’d connect soon on it, but not soon enough due to Arsenal’s death.

Oliver is beyond upset with Superman over what happened at Sanctuary and strikes him despite it having no real impact on the invulnerable Superman.

We also raises his hand to Wonder Woman, but doesn’t strike. Oliver is angry at Batman who isn’t at the funeral as he’s doing detective work to try to find the Heroes in Crisis killer.

Donna Troy then speaks about Roy Harper who she had a connection to. She tells a story from their past and notes indirectly that…

…Oliver Queen was a trigger for Roy’s dependency issues.

…however that 1970s arc was recast in the DC Rebirth above.

All that said, Oliver Queen realizes that he needed to be more of father to Roy…

…rather than a buddy or super-hero partner or boss and…

…that will eat away at Green Arrow for some time.