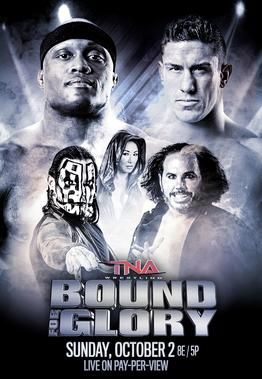 Josh Mathews and D’Angelo Dinero are calling the action. Gail Kim will be the Hall of Fame inductee tonight.

~MATCH #1~
TNA X-Division Champion DJ Z defeats Trevor Lee at 11:10. DJ Z has been the Champion since 9.1.16, and this is his third defense. The Champion controls the early going, so Lee takes a powder to the floor, and that works for him briefly when he gets back in the ring. Lee perseveres and eventually takes control, working DJ Z over with his unique move-set. They work a fast pace and trade control multiple times. Finally, DJ Z connects with his rolling DDT to get the pin and retain the title. Fun, past-paced action to start the show, but nothing to really remember later on.
Rating: ***¼

~MATCH #2~
Eli Drake defeats Baron Dax, Basile Baraka, Braxton Sutter, Grado, Jessie Godderz, Mahabali Shera, Robbie E, Rockstar Spud, and Tyrus at 15:19 in a Bound for Gold Gauntlet Battle Royal. This starts out with two men in the ring, with a new entrant coming out every 90 seconds. Godderz and Spud are the first two entrants. Sutter is out next, and Drake is after that. Drake eliminates Sutter. Robbie E brings us to the halfway point for entrants. Dax is number six. Grado is the seventh man out, and he gets eliminated in about five seconds. Baraka is number eight. Both members of the BroMans and the Tribunal are in there now, and they both work together. Baraka and E more or less eliminate each other, then Godderz tosses Dax. Tyrus is next up at number nine. He tosses Spud out, and then Shera completes the field at number 10. Drake eliminates Shera, and then sneaks up on Godderz and Tyrus battling on the ropes and dumps them both to the floor to win. Drake now has a World Title opportunity, but he must make his intentions known at least one week in advance. I like that. The match was almost nothing interesting, but at least Drake was the right call to win.
Rating: *

~MATCH #3~
Moose defeats Mike Bennett at 10:11. Bennett looks hesitant to even lockup with his former tag team partner, literally running away from him. When Moose does get a hold of Bennett, he uses his tremendous power to throw him around the ring and the ringside area. Bennett survives and goes to work on the leg. They go back and forth for a while, and Moose finishes it off with a discus clothesline. Not a bad match by any means, but nothing that really made either guy shine either.
Rating: **¾

~MATCH #4~
Aron Rex defeats Eddie Edwards by split decision to become the first-ever IMPACT Grand Champion at 15:00. This is a tournament final for the new Championship – Rex got here by defeating Trevor Lee and Eli Drake; while Edwards got her with a win over Mahabali Shera and a loss to Drew Galloway, who ended up injured and had to withdraw so Edwards replaced him. The first round is five minutes long, and we even get a countdown clock in the upper left-hand corner. Both these men were trained by Killer Kowalski, by the way. They trade holds and counters back and forth, feeling each other out in this first-time ever match (I think). The first-round ends and all three judges award it to Edwards. At the onset of the second round, Rex wisely fights hard, as he needs to impress the judges to win this second round. Rex goes after Edwards’ left knee, which should in theory keep him grounded. Unfortunately for the wrestlers, electrical issues shut the lights off in the arena and the fans are annoyed. The lights come back on with about a minute left in the round, and Rex just keeps working the leg. Round two goes to Rex, naturally. Rex goes right back to the leg to start round three. Edwards fights back and hits the Boston Knee Party for a near-fall. The pace quickens as both men are going for the big move to get them a victory. They’re trading blows back and forth as the bell rings, and we wait for the judge’s decision. The first judge votes Rex, the second votes Edwards, and the third goes to Rex. The rounds system really made this a tough match to get through. It cut out the drama, not to mention having someone win a belt via judge’s split decision is lame, even by TNA standards.
Rating: **

~MATCH #5~
Matt Hardy & Bother Nero (w/ Reby Hardy) defeat TNA World Tag Team Champions Decay (Abyss & Crazzy Steve) (w/ Rosemary) at 22:26 in the Great War to win the titles. Decay have been the Champions since 4.26.16, and this is their fifth defense. It’s a massive brawl to start, and Rosemary sprays mist into Rebecca’s eyes to immediately take her out of the equation. Rosemary helps her Decay brothers as much as she can. It doesn’t take long for the wackiness to begin, as Abyss/Matt and Steve/Jeff brawl backstage and outside the building. Things get way far out there, and I don’t understand a lot of what happens, but it’s certainly … different. Eventually, all four men make their way back to the ring and more weapons get involved, including barbed wire, trash cans, tables, and thumbtacks. Matt sandwiches Abyss between two barbed wire boards and hits an elbow from the second rope. Rosemary is supposed to break up the cover, but she misses her cue, and everyone looks foolish for a moment. Rebecca makes her way back and powerbombs Rosemary through a table at ringside to take her out. The Hardys get Steve set up on a table, and Jeff climbs a high ladder and smashes Steve with a Swanton Bomb to get the pin. Well, it was never boring, and the crowd ate all of it up, so I’d have to call it a success.
Rating: ***

~MATCH #6~
Gail Kim defeats TNA Women’s Knockout Champion Maria (w/ Allie) at 5:23 to win the title. Maria has been the Champion since 9.1.16, and this is her first defense. She tries to weasel out of defending her title, but Allie spills the beans that she’s cleared, and the match is underway. Maria avoids the challenger and then cheats to take control. Her husband Mike comes out to distract Kim as well. Maria instructs Allie to throw her shoe into the ring, but she overthrows it and Kim gets it, and tosses it away. Kim finally hits Eat Defeat to get the pin and win the title for a sixth time. Lame match, and Maria looked completely untrained out there.
Rating: *

After the match, Mike and Maria complain about their treatment in the company, and Mike says he’s going to stop the show, and nobody can stop him. That brings out Cody and Brandi Rhodes for a pull-apart brawl.

~MATCH #7~
TNA World Heavyweight Champion Lashley defeats Ethan Carter III at 16:09 in a No Holds Barred match to retain the title. Lashley has been the Champion since 6.12.16, and this is his seventh defense. He drills EC3 with a Spear before the bell can even ring, and then insists that Borash continue to introduce him. That’s fantastic. EC3 is ready to fight, but Lashley has a huge advantage here. The plucky yet cocky babyface challenger recovers and beats on the Champion both inside and outside the ring. Good thing he’s got the No Holds Barred stipulation to work with. Things pick up in the second half, with both men upping the intensity and ferocity of their attacks. Lashley brings his title belt into the ring, but even that’s not enough. He hits three Spears throughout the match, but EC3 kicks out each time. Now the Champ brings in a chair and lays waste to his challenger. Lashley hits a Rock Bottom and cinches in the Anaconda Vise, but EC3 powers out! EC3 makes one last comeback and hits the 1%er, but Lashley kicks out at two. They fight up to the top rope, and Lashley shoves EC3 down and follows him with a super Spear to finally get the pin. I’m not sure what the obsession was with keeping the belt on Lashley, but this certainly felt like a time to make EC3 your top guy, and as usual with TNA, they blew it. At least the match was very good. It felt like a big match, and they used the big spots and weapons in a way that made sense and escalated the physicality.
Rating: ***¾

JZ Says
The main event delivered, though the result was disappointing (I’d like to have a dollar for every time I’ve said that about TNA), so the show goes out on a high note. The opener was good, the Great War was something totally different, and they had a nice Hall of Fame ceremony for Gail Kim. Even the matches that didn’t work for me, like Bound for Gold or the Grand Title, were stipulation matches that helped add to the variety of the card, so the show was never boring.