Kevin Costner established himself as a movie star in the late ’80s with The Untouchables, Bull Durham and Field of Dreams. With his clout as a big name star, he was able to get work a deal to direct and produce a western. There were plenty of people suspect, but very quickly that doubt faded as Dances With Wolves became a box office hit and won Costner a Best Director Oscar as the film was declared Best Picture by the Academy. Now the film is coming out as a Collector’s Edition from Shout! Factory as a Blu-ray with two cuts and dozens of bonus features. Here’s the press release from Shout! Factory: 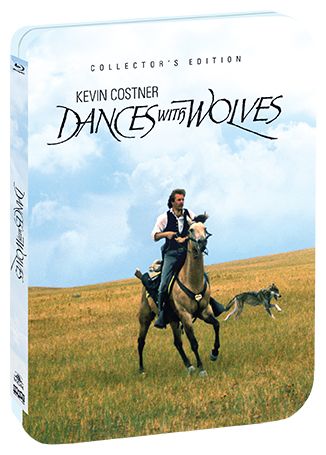 Kevin Costner stars in and directs the triumphant cinematic masterpiece Dances with Wolves, based on the novel by Michael Blake. Available November 13th, 2018 from Shout! Factory, this breathtaking three-disc Steelbook Collector’s Edition includes the original theatrical cut for the first time on Blu-ray, an extended cut of the film and an entire disc of bonus features. Fans can pre-order their copies now by visiting ShoutFactory.com

Winner of seven Academy Awards®, including Best Directing and Best Picture, this modern classic tells the story of Lt. Dunbar (Costner), a Civil War hero who befriends a tribe of Native Americans while stationed at a desolate outpost on the frontier. What follows is a series of unforgettable moments — from Dunbar’s tender scenes with Stands With A Fist (Mary McDonnell), to the thrilling, action-packed buffalo hunt. Experience the excitement, emotion and sweeping beauty of this cinematic treasure as never before on Blu-ray!

Disc Three: Bonus Features
· A Day in the Life on the Western Frontier
· The Original Making of Dances with Wolves
· The Creation of an Epic – A Retrospective Documentary
· Music Video
· Five Vignettes (Second Wind, Confederate March and Music, Getting the Point, Burying the Hatchet, Animatronic Buffalo)
· TV Spots
· Theatrical Trailer
· Poster and Photo Galleries