Braun, Dolph, and Drew come out and say that they’re the most dominant three man group in WWE history – and they didn’t need a nickname or matching vests. They argue for a bit before Seth and Roman come out and Seth says he’s the best in the world and he’ll prove it against Drew. Dolph faces Dean later. Drew and Seth have a solid match until Dolph gets involved, but Dean makes a save and Seth hits the stomp on the floor and Drew gets counted out. Taker and Kane cut a spooky promo from a boiler room with 500 camera switches over the course of two minutes. Taker’s “rest in peace” counter to “are you ready” was great though. 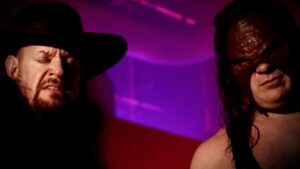 Ember and Nia Jax face Tamina and Dana Brooke. Nia avalanches Dana and the eclipse ends it. A mini battle royal erupts with everyone teaming up against Nia to get rid of her…in this thing that means nothing. A Bellas vs. Ronda Rousey video airs before Ronda comes down. Ronda cuts a brief promo before the Bellas come down and she tells them that they just steal moves from the guys and the only door Nikki knocked down was to Cena’s bedroom – and then he threw her out of that same door. The Bellas have a security team save them and Ronda kicks all their asses.

No Way Jose runs into Vacation Kurt Angle before Baron asks him how long it’s been since he’s had a singles match in WWE. Baron gives him a match tonight – against AOP. Dang – Angle vs. Rockstar Spud would be so much more fun. Dean faces Dolph in another short match between folks in this feud. Dolph beats him with a superkick after Drew distracts with a flying elbow. Seth tries to console Dean, but he leaves until Baorn makes the Shield face the Dogs of War again. Balor comes out with Bayley and beats Jinder quickly with the double stomp. Lashley and Lio Rush with a shirt out of 1988 are out so Lashley can massacre Tyler Breeze.

Trish and Lita come down and cut a brief promo until Mickie and Alexa interrupt. Mickie says that Trish and Lita haven’t been in a ring in a long time, and while they’ve been gone, Mickie and Alexa have been kicking butt. A brawl is teased, but they don’t deliver. The Riott Squad insults Bayley and Ruby gets in a great line about Bayley’s superpower only being how quickly she runs from a fight. The Conqustador comes down and Corey brings up how it’s odd that he has this gear but not his regular gear. Baron loves what he sees, but it’s not him. Instead, Kurt gives Baron an Angle slam on the ramp before hopping around in his shorts.

Nattie brings out Bayley and Sasha to counteract the entire Riott Squad. Ruby taps to a sharpshooter, but the goons attack before she can formally give up. Everyone brawls before the faces send them packing. Elias complains about a poor choice of guitar picks before coming out and trolling the fans. Apollo comes down and beats him up. The Shield and Dogs of War have another fast-paced brawl with miscommunication. This time, Drew accidentally Claymore kicks Braun to the floor after Roman steps aside and Drew gets cut in half by a spear. Shield bomb hits Dolph and Dean gets his win back on him by getting the fall. Braun beats up Dolph, but Drew makes a save and Claymores Braun on purpose.