A BFG recap video starts things off and gives you a taste of the show. Johnny Impact comes out with the title and Josh hypes this up as his first World Title win. Johnny talks about being in the crowd before and now being the World champ. He says he’s used to being a bit of an outcast to some degree, and he came through it all. Fenix, also a former LU Champion like Johnny, and the AAA Mega champ, says he wants a shot to be the Impact World champ next week. Johnny agrees. Tommy Dreamer hypes up Moose as being someone who went from the NFL to pro wrestling before Kross says that Thomas isn’t the ruler of their lives and they’ll destroy him tonight. 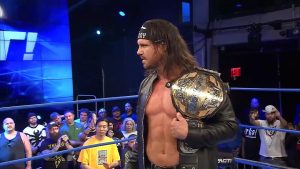 Katarina and Taya have a match in slow motion while Josh talks about Impact After Dark debuting next week – so everyone should set their DVRs. Well, at least the company seems to be preparing for even more ratings death. Taya takes her out with the Road to Valhalla. Taya cuts a barely audible promo, as with just about anything on the hosue mic, about not respecting Tessa now after BFG. Sydal and Ethan Page talk about their loss, but that loss making them stronger. Gama Singh and Raju chat and Singh says he will face Raju next week. 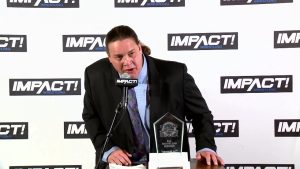 Ethan Page is out to face Trevor Lee, who lands a nice apron PK. Ethan hits a draping butterfly backbreaker for 2. Ethan hits a rock bottom and wins. He came off as just another guy on a roster full of just another guys. Rich Swann and Willie Mack are backstage with Swann hyping up Mack Mode, and Mack cuts a funny promo about Sydal and Ethan Page before telling Swann to do his best for X Title match. Allie’s skit from BFG is recapped. Allie is all creepy and weird with Kiera Hogan. The Jericho cruise is hyped and it’s so weird to see ROH footage on an Impact show. EY vs. Mangus is the GWN match of the week.

The LAX vs. OGz match is recapped before Petey chats with Scarlett and she tells him that he won’t be her charge. Killer Kross has an overly-long match with Tommy Dreamer, who gets too much offense until Kross knocks him out with the Saito suplex. Moose spears Dreamer after the match. Abyss’s hall of fame speech is recapped, and it’s a sweet speech from a guy who comes off as super-nice in every interview he does. The interviewer welcomes Her Guest at This Time Eli Drake, who complains about BFG’s beating. The OGz and LAX have a meeting and King admits defeat. Allie faces Alisha, and Allie slaps herself because she’s possessed now. Allie beats her iwth a codebreaker before Allie snaps out of it. 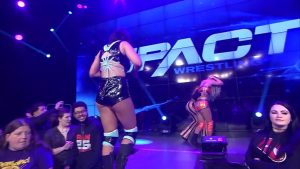 Swann and Cage warm up before their match. Jordynn Grace is hyped up with a brief video package. Rich Swann gets some mild clapping from a fan in a Raw 25 hoodie. Cage comes out with his legs all K-taped up. Cage gets a big delayed vertical, but Swann escapes and sends him out and he dives on him – with Cage catching him and throwing him onto the post before landing a delayed powerplex. Swann gets a high kick combo for 2. Cage hits a wacky spinning facebuster for 2. Swann misses a phoenix splash and a powerbomb hits for Cage, then a buckle bomb, and weapon X. Sami jumps Cage, but Cage takes him out and drillclaws Jake. 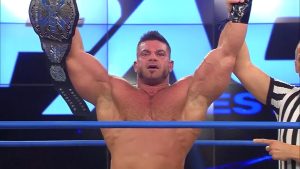