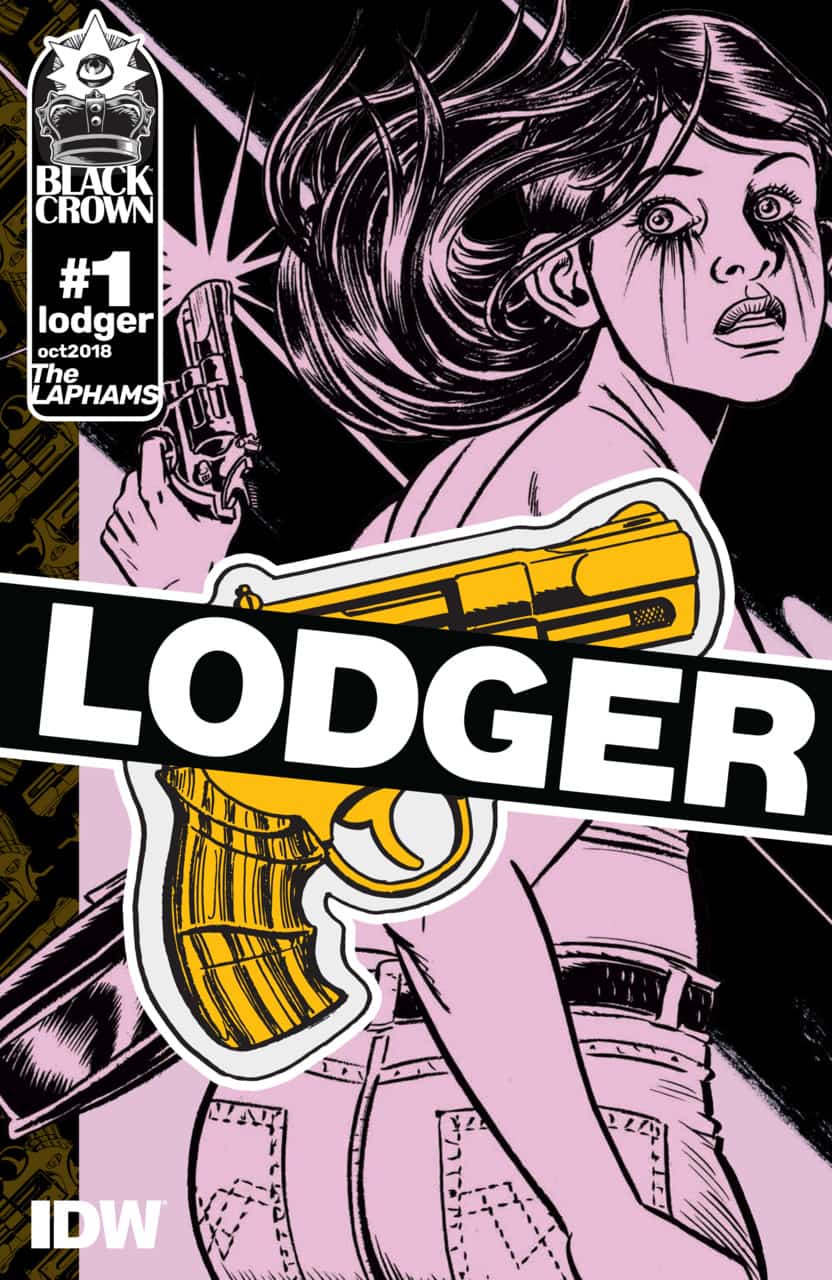 Lodger #1 – Somehow, we’ve reached a period of peak David Lapham.  While still working on his classic Stray Bullets (recently increasing the page count of each issue), Lapham is joined by his wife Maria on this new series at IDW’s Black Crown imprint.  It’s a creepy and thought-provoking first issue. A young woman comes to a small town in Northern Michigan, just as a string of murders take place. She’s somehow connected to what’s happening, and is searching for someone who is also connected, but the relationships, not to mention just what happens in a rest stop washroom, are not at all clear yet.  What is clear is that the Lapham’s are master storytellers, as this book really grabs my attention. I definitely need to give this issue a second read, as what I thought was a weird oversight at the beginning of the book is pretty significant, and I’m not sure if there are other clues as to what’s going on that I missed.

Aliens: Dust to Dust #3 – I have no idea why this book is so late, but Gabriel Hardman’s great art and sense of urgency in the story makes up for it.  He’s relying on a few too many standard Aliens tropes here, but by putting the emphasis on a child who believes that his mother might live on in the xenomorph that burst from her chest, he has a new twist on things.  I just wish it came out more quickly. 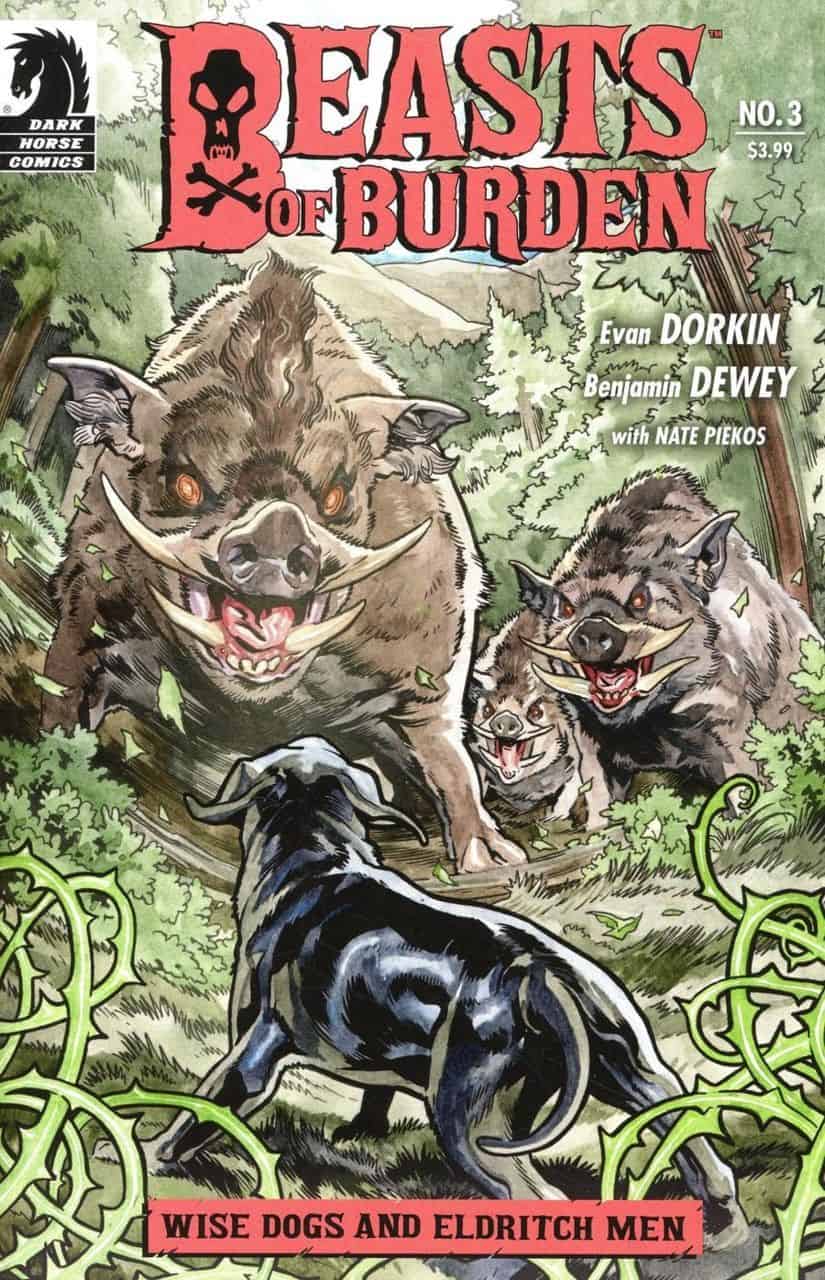 Beasts of Burden: Wise Dogs and Eldritch Men #3 – Evan Dorkin continues to have his Wise Dogs go hunting for the men who have been using magic in the area, and it’s made clear to us just how extensive a threat they really are.  Benjamin Dewey continues to astonish with his art – he makes these characters just as expressive as Jill Thompson did. It’s weird to see humans play such a key role in this book – I don’t think we ever saw any during the earlier runs – but it helps reveal some new aspects to this fantasy world where magic-wielding dogs protect everyone.

Days of Hate #9 – It’s beginning to look like the government holds all the cards, as the agent makes his move on his lover, and the two-person resistance cell is not entirely sure what they should do next.  Ales Kot has built a lot of suspense into this issue, as we still don’t know what the resistance is trying to accomplish; we just know that they are in Washington DC and it looks like they have nothing left to lose.  This has been a terrific series, and I’m excited to read its final three issues.

Dead Kings #1 – I often find that projects at Aftershock lack the clarity that similar projects, often by the exact same writers, don’t lack when they are published through Image, Black Mask, Boom!, or other publishers.  Is it intentional? Steve Orlando’s other work has been clearer than this one, but I’m still pretty interested. Like his recently wrapped-up series Crude, Orlando is interested in a bleak future vision of Russia. A young man is working to free his brother from a prison camp, and to do so he has to attempt to gather some support.  His Rus (now called the Thrice-Nine for some reason) is a bit of a wasteland, run by Secret Police. There’s a lot that hasn’t been explained yet, but I’ve come to trust Orlando (at least when he’s working on a creator-owned book), so I’m going to stick around for a bit and see where this is going. Matthew Dow Smith’s art is kind of generic, but it works here.

Die! Die! Die! #4 – So much more is made clear in this issue, as one of the triplet assassins works to infiltrate the life of his brother, and we get an expanded view of the world in which they all operate.  We also get to see some truly incredible fight scenes thanks to Chris Burnham. Robert Kirkman and co-writer Scott Gimple are having a ball with this series, and it shows on every page. Great stuff. 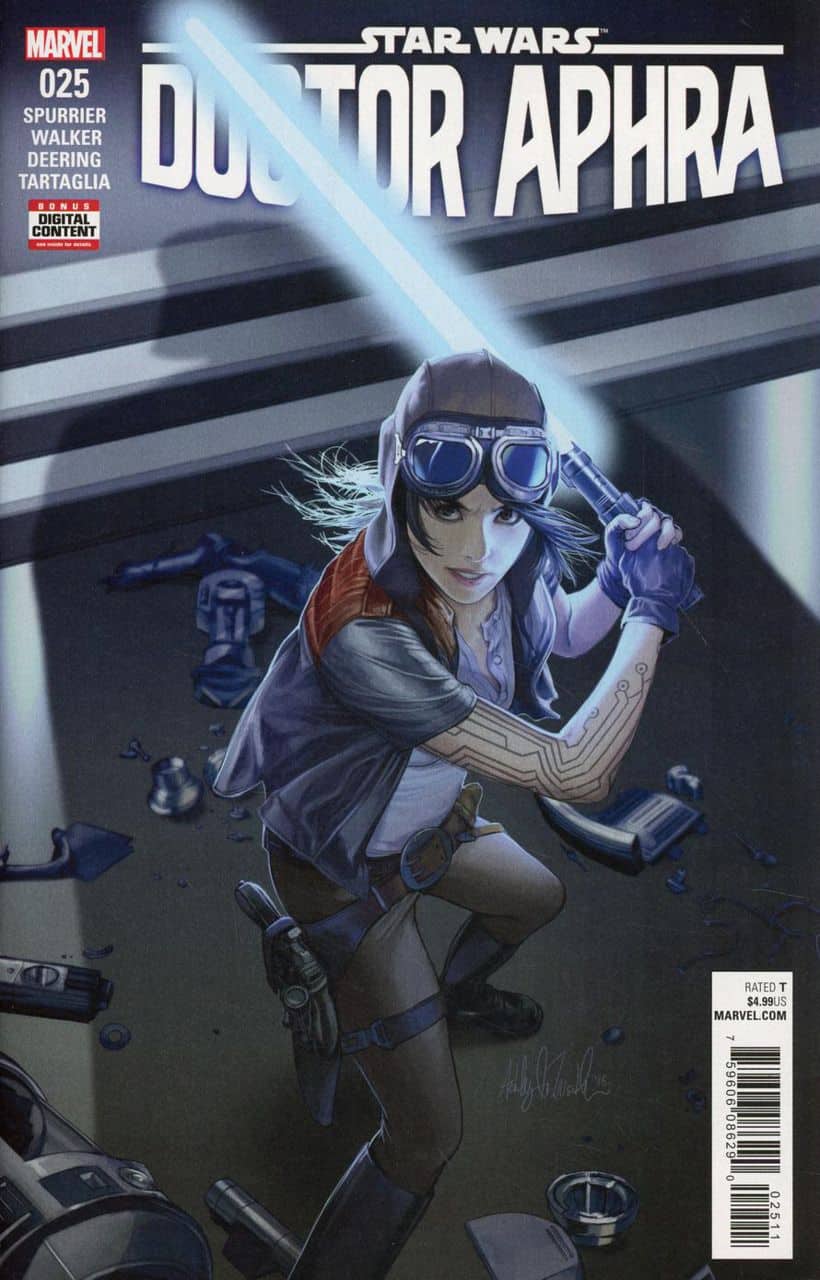 Doctor Aphra #25 – I’d really expected this series to take a nosedive after Kieron Gillen left, but I feel like Simon Spurrier has exceeded all of my most optimistic hopes instead.  This issue wraps up the long-running storylines around Aphra’s time on a prison ship, her burgeoning relationship with an Imperial officer, and the question of whether or not Darth Vader was going to find her.  There are a number of unexpected events in this issue, culminating in a new status quo that ensures we are going to be seeing a lot more of Triple-Zero, the psychotic torture droid, in future issues. Kev Walker’s art is very nice here – I love the way he draws Aphra and her weird prison ship outfit.  This was a very impressive double-sized issue.

Punisher #3 – Szymon Kudranski does an excellent job choreographing some major fight scenes on the subway, as Castle and Daredevil face down a large number of hired goons.  Matthew Rosenberg has made this series less introspective than the last one, but so far it’s been working. I do really wonder just what place Nick Fury Jr. has in the post-SHIELD Marvel universe, as he shows up in this issue, but it’s not clear in what capacity.  The surprise ending actually irritated me, and makes me wonder if I’m going to stick with this title for a long time (some characters, I really just hate).

X-Men Red #9 – Jean heads to Genosha to rescue Rachel and confront Cassandra Nova, while the rest of the team works to make the Internet a nicer place.  One of these tasks seems impossible, doesn’t it? Tom Taylor continues to make this the best X-Book on the stands, and I’m saddened to learn that it is going to be ending soon, as Uncanny X-Men relaunches.  I’m not sure why so much time and effort was taken to build this team, and their Atlantean base of operation, if none of it is going to stick around. I wonder if that means Nightcrawler is going to be shaving his beard soon too…

X-O Manowar #20 – This book is really starting to lose me.  Matt Kindt is using this title to revisit some dangling threads from his Divinity trilogy, and as Aric entertains visitors from the world portrayed in that book, I find myself getting kind of bored.  I might be dropping this title pretty soon, I’m afraid. 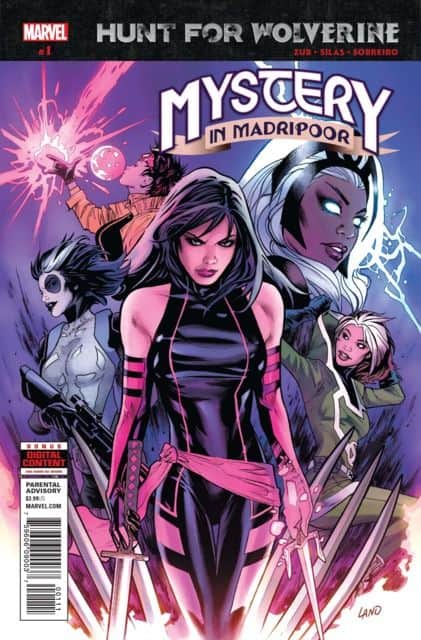 Hunt for Wolverine: Mystery in Madripoor #1-4 – This was all a disappointment.  I already knew that the assembled team of female X-Men, all of whom had close ties to Logan, wouldn’t find him, but so much about this miniseries felt slapped together.  The weak reason of suspecting Magneto in the abduction of Logan’s body leads to the heroes uncovering a Magneto-related plot by Viper and a bunch of deep cut villains to do something, which all in turn leads to Psylocke reclaiming her original Caucasian appearance for no real good reason.  Jim Zub would have done better reminding us who Sapphire Styx is, and building some kind of identity crisis into Betsy that helped the resolution feel more impactful (unless, of course, his editors just threw that in at the last minute, which is what it felt like). What makes this even harder to deal with is Thony Silas’s artwork – I often couldn’t tell characters apart (Storm and Knockout look identical in some panels, as does Asian Psylocke and Viper), and the storytelling felt like early Image reject stuff.  I picked up most of the rest of the Hunt miniseries when I got these issues, and I hope they are better than this… 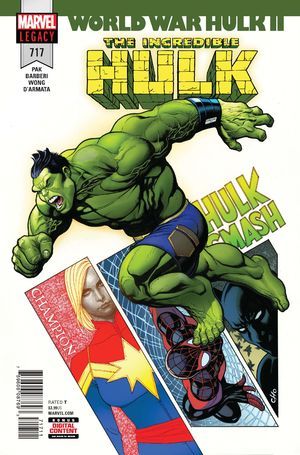 Incredible Hulk #715-717 – The end of Amadeus’s run as the star of this book is a little bland.  Greg Pak is a great writer, and did some very special work with Amadeus a while ago, but as this book moved from being Totally Awesome to merely Incredible, it also became a lot more derivative, and too set on recreating the tension that used to exist between Banner and the Hulk.  I’d rather have seen Amadeus do something new and different…

Star Wars: Lando – Double or Nothing #4 – I still find this series to be way too generic to have been worth putting out.  I’d have rather seen something that does some kind of substantial character work on Lando…