Kanye West Doubles Down On President Donald Trump & Partners With Blexit?! Macy Gray Has Her Own Rebuttal Hat? 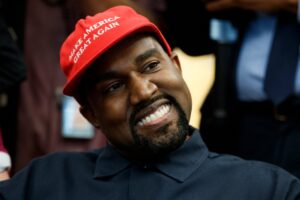 The Kanye karnival continues as the U.S. mid-term elections are one week away. He has put his creative efforts to work for Blexit, a play on the Brexit terminology and movement from Europe that culminated with the U.K. voting to leave the EU. Blexit’s goal is to essentialy encourage Black Americans to exit the Democratic Party. While the U.S. black community is not a monolithic voting block, many in it lean in larger numbers to the Democrats. 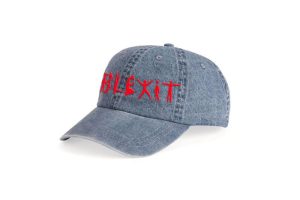 “Blexit is a renaissance and I am blessed to say that this logo, these colors, were created by my dear friend and fellow superhero Kanye West,” said Owens, 29.

She gushed that West “has taken one of the boldest steps in America to open a conversation we have needed to have.”

The rapper and husband of Kim Kardashian visited the president inside the Oval Office earlier this month. His bromance with Trump began around April, when he tweeted, “the mob can’t make me not love him.”

The new shirts come in traffic-cone orange, teal and a muted lavender with designs that say “Blexit” or “We Free.”

The clothes were part of a broader launch of Blexit.com, which includes testimonials from black Americans who have left the Democratic Party.

Owens said there will be a Blexit tour to major cities including Chicago and Philadelphia, starting next year.

“The Blexit movement will spend 2019 holding rallies in every major city in America that the Democrats have destroyed,” she said.

Singer Macy Gray has a message for Kanye West.

Regardless of your political leanings, these are bizarre times and, if the last week tells us anything, tragic times as well.