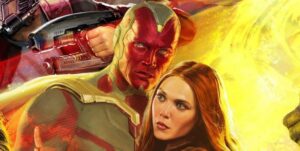 The plan is to create series based around Marvel Cinematic Universe characters who have yet to have their own standalone movies, which includes TV shows focused on Loki and Scarlet Witch starring Tom Hiddleston and Elizabeth Olsen. Each season will run six to eight episodes, and unlike most of the Marvel Netflix and ABC shows, Marvel Studios President Kevin Feige is expected to have an active role in their development.

We have learned that Disney is also developing a third series that will give fans the Falcon/Winter Soldier team-up that they have been wanting since Captain America: Civil War. On top of that, I have also learned a few more details about the Scarlet Witch series. Here’s what we know…

…The other thing I’m hearing is that Paul Bettany‘s Vision will have a large part in the previously reported Scarlet Witch show. In fact, it may actually be a series more about the super-powered couple than just Wanda. This makes sense to me, as Wanda’s relationship with Vision is more compelling than Wanda on her own, and the two have a long and fascinating relationship in the pages of Marvel comics. I don’t think Scarlett Witch has received proper development outside of maybe Civil War, so a series that explores her further via her relationship with Vision makes sense