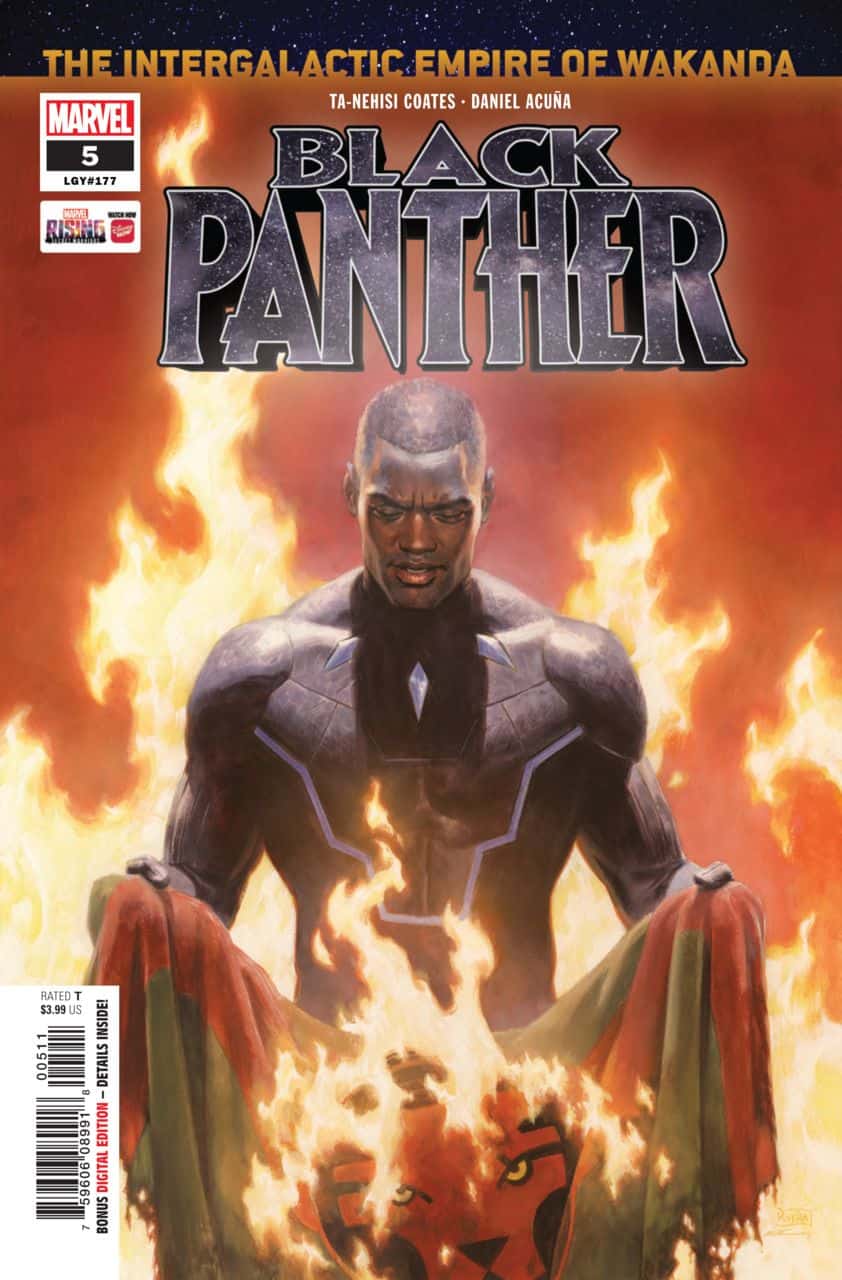 Black Panther #5 – Ta-Nehisi Coates’s Afrofuturist version of Star Wars continues, as the Maroons have settled on Hoth for five years, and now the Empire has found them.  It’s time for Luke, I mean T’Challa, to embrace his destiny and prepare to fight. This issue was a solid character study, and helps to build on what Coates has done with this run.  I’ve taken to reading this like an Elseworlds comic, and am fine with that – when I think about this in terms of continuity it irritates me. Instead, I’m just enjoying the fine work that Coates and artist Daniel Acuña are doing on this book.  It has some very cool moments.

Daredevil #610 – DD hooks up with Elektra, and then takes his new squad to kidnap the Kingpin’s right hand man, leading to a fight with Vigil, the new Catholic-themed villain.  It’s all good stuff, but I’m not sure where all this “Death of Daredevil” stuff is coming from, unless it’s just an excuse to relaunch with a new number one or five when Charles Soule leaves the title.  The editorially-mandated nature of this makes me less enthused for the story, which is too bad, because Soule has been excellent on this book. 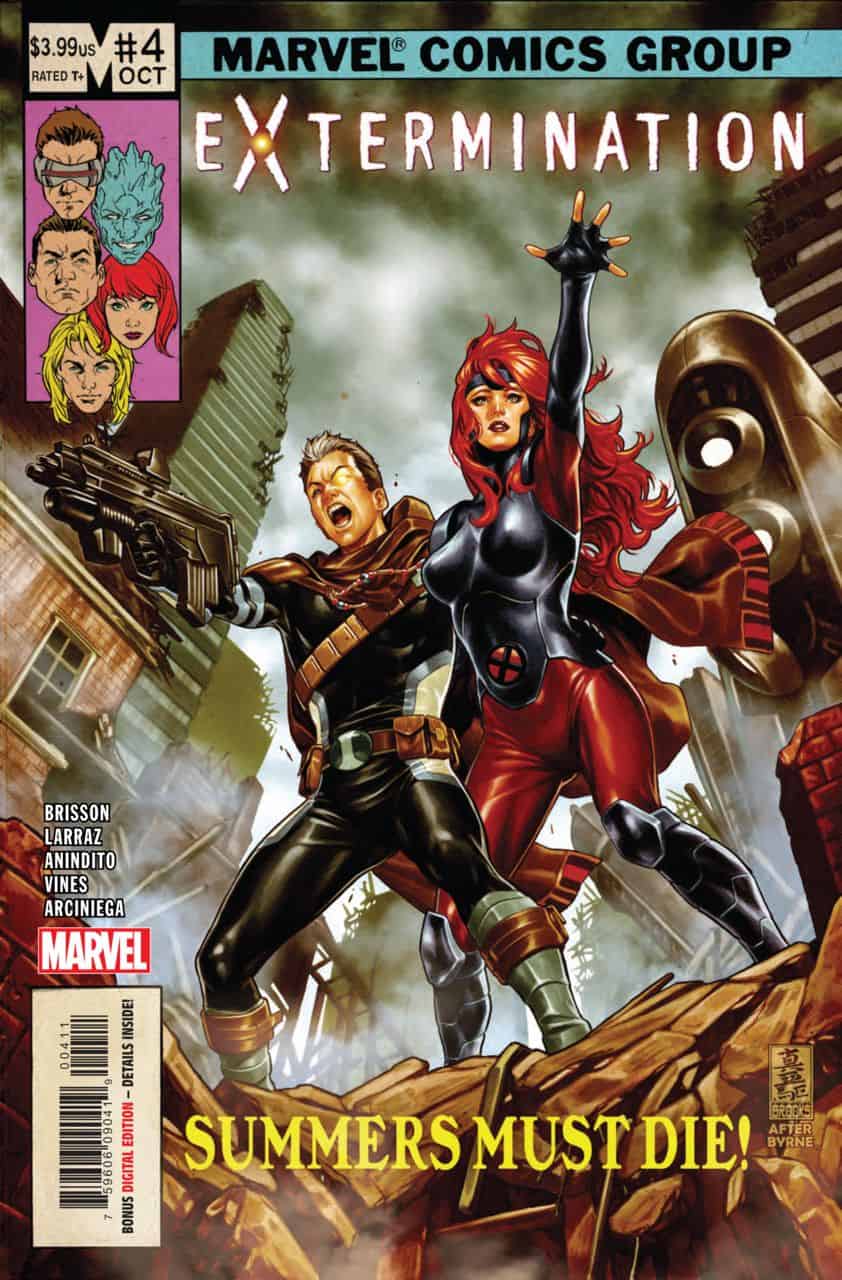 Extermination #4 – We finally get some explanations, as Teen Cable opens up to the X-Force squad about what his mission is (there’s some internal hypocrisy about the fact that he’s come back in time to change the present to prevent the Teen X-Men from changing the past which then changes the future), while Ahab makes a last-ditch effort to take out Teen Cyclops.  I have been enjoying this title – it’s the first time in a while that an X-Book has felt like it “matters”, and Ed Brisson has done a great job of keeping all the various parts moving. I do hope that the Teen X-Men are going back home next issue, as I think their story potential has more than played itself out the last few years. I’m also getting excited for Brisson’s upcoming X-Force comic; he has a good handle on these characters.

Heroes in Crisis #2 – I was looking forward to this event series written by Tom King, because I tend to really like Tom King’s writing, but hadn’t counted on a few problems.  One, there is way too much Harley Quinn in this comic, which makes it a little painful to read. Two, there is way too much Booster Gold in this comic, which, in the Rebirth era, also makes it a little painful to read.  I’m curious about the Sanctuary aspect of this story – that there is a place where heroes can go to receive therapy or address some of the issues they accrue while doing what they do. I’m much less interested in the murder mystery aspect of things, and two issues in, am not too sure of what the actual shape of this series is going to be.  I trust King, but did find this a little irritating to get through…

Man-Eaters #2 – I want to like this title – I really enjoyed Chelsea Cain and Kate Niemczyk’s work on Mockingbird – but two issues in, and there just hasn’t been a lot of story happening yet.  Instead, we get a lot of exposition still, and an action scene that doesn’t make a lot of sense (don’t cats see better than people in the dark – why would you turn off the lights if a big cat is about to attack you?).  There’s some real charm in this book, but it’s lacking in substance. I think I’m probably done here.

Marvel 2-In-One #11 – I haven’t been reading Fantastic Four since it returned, and now this title has caught up to that.  Ben and Reed share the spotlight this month, as Chip Zdarsky has them track down the Mad Thinker and try to work out their issues.  Reed’s explanation as to why he never let Ben and Johnny know he and his family were still alive rings pretty false, but it does allow the introduction of an alternate Doom in another plane.  I think this book is ending soon, which is too bad, because I’d much rather see Zdarsky write the FF than Dan Slott, especially with art by Ramon Pérez.

Multiple Man #5 – This has been a pretty confusing and unconventional title, and its big conclusion fits well within that lane.  It’s also probably the closest I’ve seen Matthew Rosenberg’s work at Marvel come to the structural craziness of his work at Black Mask.  I enjoyed this title, but feel like I probably need to read the whole thing again from the beginning to make sure I didn’t miss something.

Shanghai Red #5 – I really liked this historical miniseries that explored the practice of Shanghaiing sailors, the way crime infested Portland, and early transgender representation.  In the past, I’ve not been all that impressed with Christopher Sebela’s writing, but this series really clicked for me. As well, I thought that Joshua Hixson’s art was pretty impressive.  I would gladly check out something else by these two. 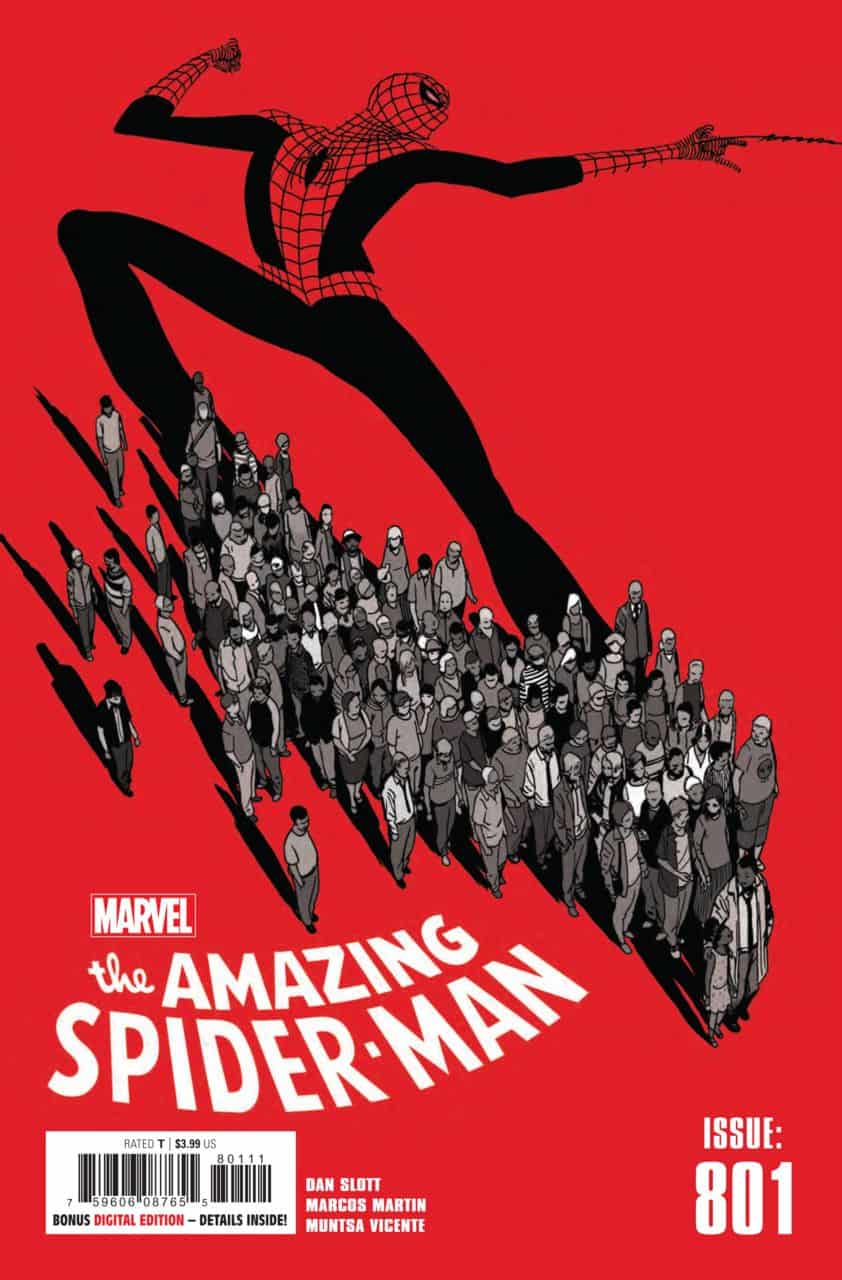 Amazing Spider-Man #797-801 – Dan Slott finished his historic run with a real flourish, bringing together most of the supporting cast he developed and put in a place of prominence over his lengthy time with Spidey, while also giving us one last exciting story featuring the Green Goblin merged with the Carnage symbiote.  There are some great moments in these last issues, but it’s all eclipsed by the beautiful coda issue, 801, drawn by the great Marcos Martin. It was Martin’s art that got me to start buying Spider-Man just before Slott took over, so it was nice to see him there for the ending. Slott’s run was decent – his combative internet posturing kept me from supporting the book regularly, but I’m sure I’ve now read the entire run, over many confusing relaunches and renumberings, and it’s a run I’ll remember fondly. 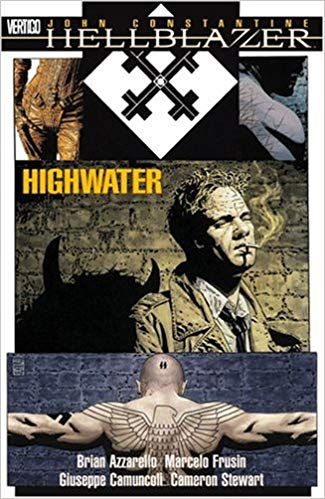 John Constantine: Hellblazer: Highwater – The end of Brian Azzarello’s run on Hellblazer in the early ‘00s is dark and disturbing, but also a very challenging read, plot-wise.  John barely appears in the last half of the book, having been burned to a crisp in a sex dungeon in Los Angeles by a crime lord that he was maybe having sex with.  Azzarello’s run started out great with John’s incarceration, but as he began to dig into the backstory behind that, things just got a little too weird. I can’t imagine what it would have been like to read these books on a monthly schedule.  There is some nice mid-era Vertigo house style art by Marcelo Frusin though.