Baron Corbin comes out to talk about Crown Jewel and Brock’s title win while the roster is on the ramp and he talks about Raw being dominant at Survivor Series. Corbin will capatain the men’s team, while Alexa will captain the women’s team. Alexa names her team and Kurt wants a match with Corbin tonight to be the team captain for Raw. Corbain says sure and Kurt says he’ll snap his ankle. Braun comes down and beats up security to go after Corbin, who retreats. A brawl breaks out and Nattie talks about wearing her dad’s shades tonight to bring her luck. Nattie, Bayley, and Sasha face the Riott Squad. Nattie avoids the Riott kick and they all proceed to do a bunch of holds for eons. Sarah’s in the sharpshooter, but Ruby breaks the shades to break the hold and Nattie cries. I guess this is a no contest. 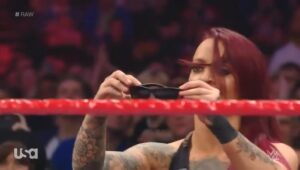 Jinder comes out for a match with Apollo Crews. Crews beats him quickly with a press slam and moonsault. Jinder was WWE Champion one year ago and is now losing in nothing matches on Raw to Apollo Crews – and it doesn’t even feel like a notewrothy win for Crews. Seth comes out and cuts a promo on Dean before AOP comes out and faces him in a handicap match for the titles. Seth gets in a bit of offense, but eats a powerbomb and a Batista bomb/neckbreaker combo to end it and give AOP the titles. Dean comes down and tells him that he won’t tell him why he attacked him and lays him out with Dirty Deeds again.

Dolph comes out and cuts a promo before Elias comes out and calls him a loser. He met the Gallaghers and they said if he sings this, Oasis will reunite. They proceed to have a long hold-filled match. Elias wins with Drift Away, so he beat a former multi-time World Champion and just like with Crews, this didn’t feel like a major win for him. WWE hands out on-paper accomplishments so often that everyone gets them, so they mean nothing. Kurt says he knows Corbin’s weaknesses and he’ll win tonight. Ronda comes out and says very little until Nia comes out and makes idle threats. Nia faces Ember Moon, and Nia beats her quickly with a Samoan drop.

After the match, Tamina comes down and teases beating up Nia – but teams with her against Ember. Braun chases Baron Corbin out of the building after making Angle vs. Drew tonight. Lashley comes out to face Finn Balor, in rainbow-themed kneepads. They have a long match and Lashley wins after a tackle into the barricade on the floor and a Yokosuka cutter in the ring. Drew comes down and Lashley leaves before Drew attacks him, and then Drew hits a claymore on Balor. Kurt comes out and eats chops in the corner. Angle slam hits quickly, but Drew goes to the floor. Drew lands a big suplex, but Angle gets the Germans. He sets up the Angle slam, but Drew nails the claymore and just waits. Kurt fires up, but gets stomped. Drew offers up his leg and Kurt goes for a single-leg, but Drew takes him down and pummels him. Kurt gets the ankle lock. Drew escapes and his the Anlge slam and makes Kurt tap to the ankle lock. Well, that felt like the kind of story you tell in Kurt’s last match – and/or the beginning of a megapush for Drew.