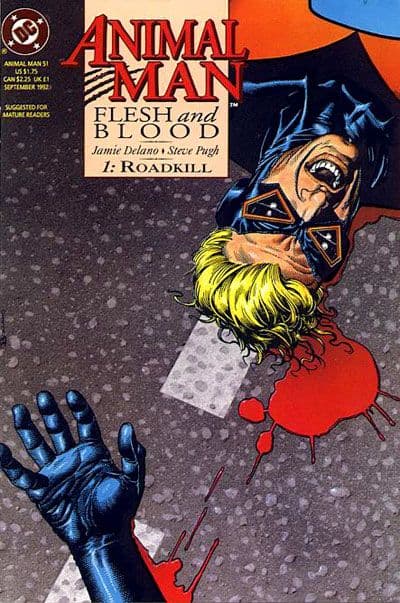 Spoilers (from twenty-three to twenty-six years ago)

I remember loving Jamie Delano and Steve Pugh’s run on Animal Man.  Their time began with the book becoming “suggested for mature readers”, and after their first arc, was one of the few DC Universe books to get moved over to the newly-created Vertigo office.  I don’t really remember the plot of the run much beyond knowing that Buddy becomes a gigantic chimera, and ends up being the central figure of a cult that is based out of Ellen’s mother’s farm.  What stands out in my memory is the way in which Mary Frazier, Cliff, a new character named Annie, and her daughter all become very real characters. I wanted to read these issues again as much as I wanted to revisit Morrison’s run, which is why I decided to focus on this series in this column.

If asked to name my top ten favourite comics runs, I would put this run on the list.  I hope that it’s as good as I remember it, or this column might become a chronicle of my disappointment.  Let’s hope not. 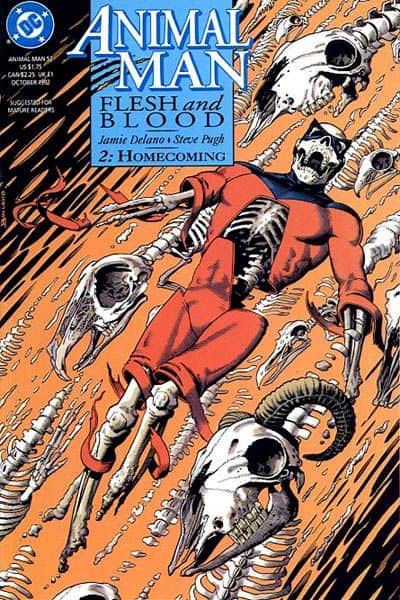 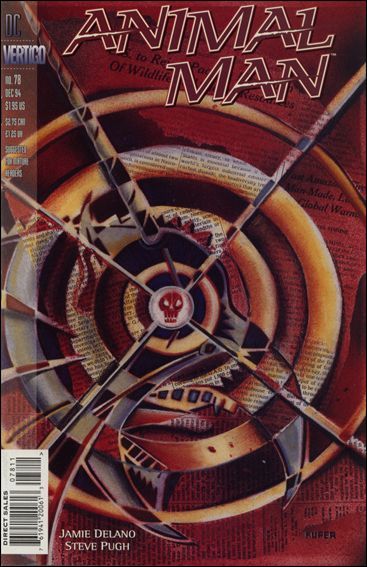 Twenty-five odd years after I first read it, I think I love this run as much as I did the first time through.  I credit this run, which I first read in my late teens and earliest of twenties, with helping make me aware of issues around the environment and LGBT inclusion, but also introducing me to just how wonderful an artist Steve Pugh is, and just how florid Jamie Delano’s writing can get (check out his Avatar series about pirates – I forget the title – to see it taken to extremes).

Delano, Pugh, and the various guest artists took a character who was at one point a D-list superhero, and continued his evolution from meta-commentary on superheroes through avatar of indigenous perspectives, into a role as a messiah figure.  They built on this slowly, first introducing the idea of the ark as a safe space for weirdos who want to live differently, before going full-bore into the Red Plague.

The thing is, had you asked me what I remembered best about this run before I reread it, I would have to say that it was the characters that always stuck with me.  I grew to love Cliff, who started out as an annoying Bart Simpson look-alike in Morrison’s hands, and instead evolved into an abrasive yet loyal kid who put his family first, while recovering from abuse at the hands of his uncle.  I also grew to love Mary, who slowly shook off her physical and emotional isolation to be the strong guardian of anyone who found their way to her. Delano portrayed Ellen as a very complicated character who wrestled with the divides within her personality.  She wanted nothing more than to be a loving mother, yet found that to do that, she needed to be separated from her family, and ended up living in a commune with lesbians, including a woman she fall in love with.

Annie is one of the best characters in this comic.  She’s also very complex and difficult to predict, but at the same time, incredibly internally consistent.  Her place in the Life-Power Church is interesting, as she’s clearly not a believer, but is also the person that keeps it running.  Her relationship with everyone in the book is often prickly – especially that with her daughter and with Ellen – although she always seems nicest to Cliff.  Her relationship with Buddy is interesting to watch develop.

Maxine only began to be unusual, in terms of animal powers, during Tom Veitch’s run, but Delano really leans into that, and manages to take the editorial mandate of the Children’s Crusade crossover, which had Maxine interacting with kids from other Vertigo titles, and uses it to accelerate his own story, with the advent of the Twinbaby, and her role in pushing Ellen away from the family.

Even the character of Ray Dillinger (who was Maria Hill before there was a Maria Hill) is handled in a complicated and fascinating way.  She starts out as a bit of a parody of the Nick Fury type, but when she is sent undercover into the Red Plague, she becomes the narrative focus of the book, allowing Delano to provide an outsider’s point of view that helped to clarify just what the members of the Life-Power Church are all about.

It’s interesting, in looking back at these issues, to see how Delano portrayed and explained the idea of The Red without once referencing The Green, the concept developed in Alan Moore’s Swamp Thing.  The connection is obvious, but Vertigo Animal Man had no contact whatsoever with the rest of the DC Universe, to the extent that his Justice League membership was never once referred to. Later, in the New 52, Jeff Lemire would go on to tie The Red and The Green together in the fight against The Rot, which led to some great superhero comics, but this portrayal stayed more true to the idea of humanity having separated itself from nature.

Early Vertigo was a lush period of creativity at DC (I’ve loved looking at the house ads for the various miniseries and titles that I’d more or less forgotten about from that era).  Animal Man never received the attention garnered by Sandman, Hellblazer, or some of the other bigger titles of that era, but it was always one of the higher quality books. The letters page showed that Delano’s story both resonated, and churned up some anger among more conservative readers.  In so many ways, this book was ahead of its time…

Steve Pugh’s art is fantastic here.  He gives the characters so much personality, and helped them seem real.  I like the narrative trick of having Cliff illustrate letters to his mother in comics form, giving Pugh a bit of a break, and allowing for a quick information dump.  I also like the way Pugh played with the design of Buddy’s more animalistic form. The first time Buddy exists like this, he looks very different from the second, more prolonged time.  I would have liked to read the design notes around this, as it felt that every visual element was there for a reason.

The various fill-in artists were also very accomplished, and the book maintained a consistent feel, even when an artist as distinct as Peter Snejbjerg subbed in.  A lot of the credit for that could be giving to colourist Tatjana Wood, who was with the book from its inception, which is a remarkable feat. 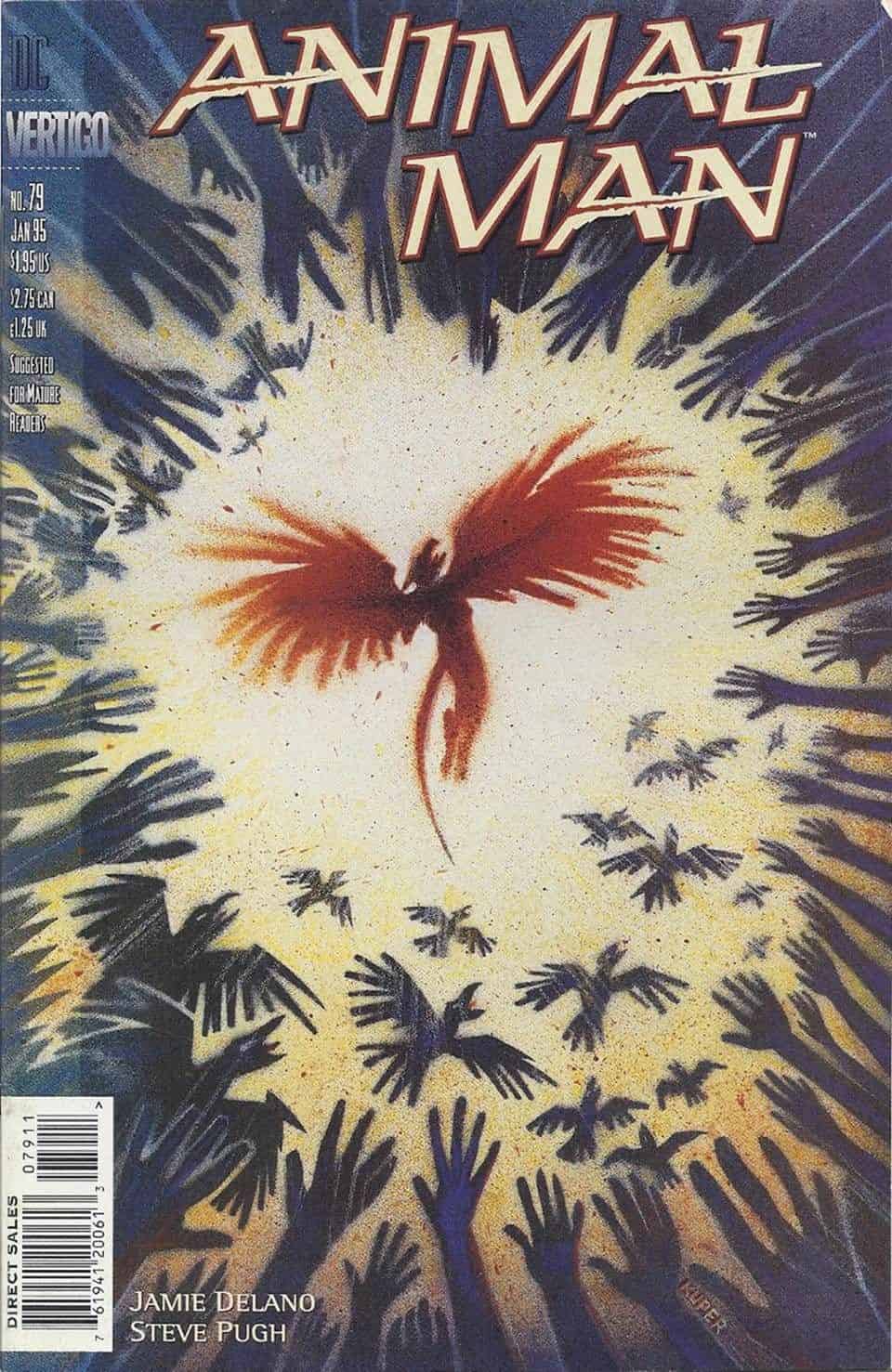 When the comic moved under the Vertigo umbrella, it took on the distinct trade dress of early Vertigo.  Brian Bolland’s covers became more serious at this point, and eventually, he left the comic. He was replaced with a variety of cover artists, and things got pretty ugly at times.  The early 90s were an ugly time, and while Vertigo was a safe haven from pouches, muscles, and the lack of feet, the opposite side of that was an attempt to imitate the strange constructions Dave McKean was making for Sandman.  That lead to some terrible Tom Taggert covers on this book, but towards the end of the run, things improved, culminating in a beautiful final Peter Kuper cover.

After Delano and Pugh left the book, it was given to Jerry Prosser and Fred Harper.  I don’t think I remember anything from this run except a sense of disappointment, and I know that I ended up dropping the book three issues before the series was cancelled.  I’m going to start reading the issues I have on hand, to see if my memory of them is unfair, but I am unsure if I’m going to write up another column on this series.