Starman was an unusual film since it combined science fiction with romance. Ever more unusual was that John Carpenter directed the film. This was the softer side of The Thing since it’s also about a UFO crashing on the Earth and a shapeshifting alien surviving. Except instead of turning into Lovecraftian tentacle monsters, the alien assumes the shape of Jeff Bridges (The Big Lebowski) in order to get Karen Allen (Raiders of the Lost Ark) to help him get home. Now this John Carpenter classic gets to join his other films that have been released as Collector’s Editions by Scream Factory. Starman: Collector’s Edition arrives on December 18. Here’s the press release with the bonus features: 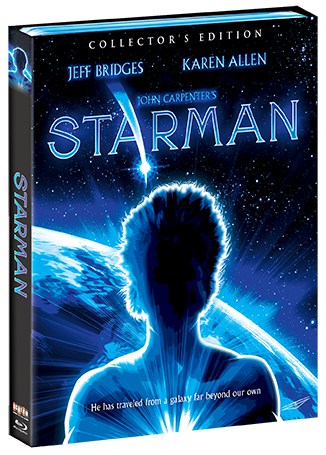 Visionary filmmaker John Carpenter presents a romantic science fiction odyssey starring Jeff Bridges as an innocent alien from a distant planet who learns what it means to be a man in love. On December 18, 2018, SCREAM FACTORY™ is proud to present 80’s cult film classic STARMAN Collector’s Edition Blu-ray. Directed by John Carpenter (Escape from New York, The Fog), produced by Larry J. Franco (The Nutcracker and the Four Realms, Independence Day: Resurgence), and written by Bruce A. Evans (Stand by Me, Mr. Brooks) and Raynold Gideon (Stand by Me, Made in Heaven), STARMAN stars Jeff Bridges (Kingsman: The Golden Circle), Karen Allen (Indiana Jones and the Kingdom of Crystal Skull), Charles Martin Smith (American Graffiti), and Richard Jaeckel (Baywatch). A must-have for movie collectors and loyal fans, this definitive collector’s edition contains special bonus content including new featurette They Came from Hollywood: Re-visiting STARMAN, audio commentary, vintage featurette, and much more! Pre-order is available now at ShoutFactory.com

When his spacecraft is shot down over Wisconsin, Starman (Bridges) arrives at the remote cabin of a distraught young widow, Jenny Hayden (Karen Allen), and clones the form of her dead husband. The alien convinces Jenny to drive him to Arizona, explaining that if he isn’t picked up by his mothership in three days, he’ll die. Hot on their trail are government agents, intent on capturing the alien, dead or alive. En route, Starman demonstrates the power of universal love, while Jenny rediscovers her human feelings for passion.