Christopher Lee quickly became the new face of horror in 1958 with back to back Hammer horror productions. First he jolted back from the dead as the Monster in The Curse of Frankenstein. A few months later he rose from a coffin as Dracula in Horror of Dracula. He brought a different flair to the undead legend. While Lee continued to make horror films for Hammer he didn’t return to either role allowed foil Peter Cushing (Star Wars) to be in the sequels. Then in 1966, Lee tightened up his cape and clamped down on his fangs for a serious return in Dracula Prince of Darkness. The film was a hit and allowed him to make five more films as Dracula. Now Dracula Prince of Darkness is coming to Scream Factory on Blu-ray. The bonus features have been announced and they best is a chance to watch both the American and the British cut of the film. Oddly enough, it’s the USA print that has the footage that was snipped by the BBFC. Here’s the Scream Factory press release with a rundown on the other bonus features: 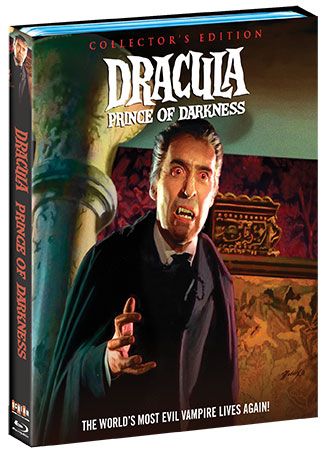 Christopher Lee’s second outing as the eponymous Dracula pushes the cinematic boundaries of graphic gore and terror in this 1966 Hammer Films classic. Available as a Collector’s Edition Blu-ray December 18th from Scream Factory, this ghoulish tale from Hammer’s golden era includes both the UK and US version of the film and a new 4K scan of the US version of the interpositive from the 20th Century Fox vaults, as well as brand-new bonus features including a new audio commentary with author Troy Howarth, a new audio commentary with filmmaker Constantine Nasr and writer/producer Steve Haberman, and much more! Fans can pre-order their copies now by visiting ShoutFactory.com

Four English tourists find themselves stranded in the mysterious village of Karlsbad, a sinister and remote place with a deadly, dark legend. Their journey leads them to an abandoned castle where a nightmarish destiny awaits them: an evil in need of resurrection, a blood-craving beast known only as Count Dracula, Prince of Darkness (Christopher Lee, The Lord Of The Rings films, Wicker Man).