Corbin, Lashley, and Drew yammer on for a bit until Braun cuts a pre-taped promo about the hospital needing special tools to fix him. Elias sings and we get a Lashley vs. Elias match. Elias hits the flying elbow, but Rush pulls the ref out for a DQ. Corbin restarts it as a no DQ match and they all destroy him for the win. Drew landed a sick inverted Alabama slam on the steps and Lashley hit a charge around the ring spear too. Corbin lets Alexa know that she is now in charge of the women’s division – so they’ve got a role for her if she needs to retire. Dean gets a series of shots to avoid getting ill from all of the disgusting fans. 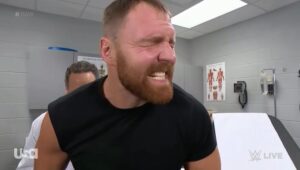 Lucha House Party comes out for another handicap match as babyfaces and defeat the Revival quickly. Boy do they need to go to AEW if that becomes a thing. Bayley and Sasha shill merch for the WWEShop sale. Lars gets a highlight video and we get a recap of Nia vs. Rousey from MITB. Ronda comes out with bloodshot eyes and red eye makeup looking terrible. She talks about Nia CHANGING THE HISTORY OF THE WORLD with her punch to Becky, which might be overselling it just a bit. Nattie saves her from a 2-on-1 beating from Nia and Tamina before the Riott Squad attacks Nattie.

Drake Maverick talks about peeing his pants while the tag champs stand menacingly behind him. AOP beats Gable and Roode when Drake takes Roode’s robe to the bathroom and pees on it. Alexa chats with Bayley and Sasha and thanks them for their team winning at Survivor Series. Ember Moon beats Alicia with the Eclipse, which Alicia sells by jumping in the wrong direction. Jinder beats Jose in a chinlock-filled match with the cobra clutch slam.

Seth is out for his IC Title open challenge, which Dolph accepts. They have a perfectly fine little match that Seth wins with the super falcon arrow. Alexa, Bayley, and Sasha have a terrible talking segment with Dana, Mickie, and Alicia jumping Bayley and Sasha. Balor faces Corbin, who makes their match a handicap match with Drew after eating a beating. Claymore and a parade of finishers from the heels end it. Well, they got Drew over more tonight – but far too many acts got under.