Tessa vs. Taya is hyped up with Tessa looking like a badass, while Eli Drake’s issues with Tommy Dreamer are recapped. Cage cashing in his title for a shot at Johnny Impact at Homecoming is shown too before Willie Mack comes down with Rich Swann. Mack has a new Lucha Underground-inspired shirt with his fro on it to face the Lucha Bros. Mack eats a Penta superkick and lands a nice rana. A 3D facebuster gets 2 for Mack and Swann. Fenix attacks Mack in the ccorner leading to a codebreaker from Penta. A double-team splash gets 2 for the Lucha Bros. Mack gets sent into the rope and lands a big pounce before hitting a tope con hilo on the floor. Double stomp spike Fear Factor on the apron hits Swann before they take Mack out with a wheelbarrow facebuster from Penta onto Fenix onto Mack. This was a blast. 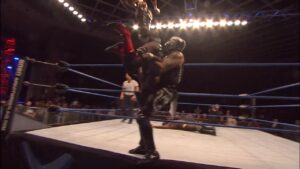 LAX comes out and asks who’s next while the crowd chants “Lucha Brothers” to the tune of Botchamania’s “Super Dragon”. LAX vs. Lucha Bros. is made for Homecoming and we get a Cage video package. Konnan talks to LAX about how risky it is to make matches with friends – it backfired on Juvi and Rey 20 years ago, and it happened to the OGz too. Katarina comes out to be massacred by Jordynne Grace again, and is in fact massacred. Grace lands a nice spinebuster and a shotgun knee before making her tap with a bearhug. Jordynne reminds me so much of Rhino early on with her unique build and act.

KM and Fallah Bahh go to gamble and lose all of their money in seven minutes. KM laments how his non-existant wife and kids will be so pissed. Scarlett shows up to perk them up, but says they’re disappointing her – so now they’re even more depressed! KM and Bahh have incredible chemistry and can do pure comedy, do it well, and get paid to take minimal damage – good gig for them. A 2016 Ultimate X match is shown for the GWN match. Tessa talks down to a ref and Drake vs. Dreamer is hyped up.

Tommy shows up with a backstage interview in a terrible-looking yellow shirt yammering about THOSE DARN MILLENNIALS! Eli Drake is nearly 40 and was old enough to be on the original ECW roster and says that Eli Drake talks about how he wants to be the Rock, but is only a pebble – and he went on Austin’s podcast and complained about everyone else costing his chances in life. Rey Lynn is out to face Taya Valkyrie, whose new bright color scheme and rap song doesn’t seem to fit her as well the regal getup did. Taya surfboard curb stomps her and then locks on an STF camel clutch before dancing to her new theme.

Tessa beats up Taya and beats up refs with D’A’more and Sonjay telling her to stop. Gail Kim runs down and throws her off. Tessa threatens Gail, so Taya spears her down. Johnny Impact talks to Kross about his weird, cryptic statements and he doesn’t want him as an ally. Kross gets mad, but tells him to not miss the bigger picture. Dezmond Xavier, Zack Wetnz, and Trey – the Rascals are out. Dez and Trey team up here against Mike Sydal and a partner. Wentz hits a big corkscrew dive before doing a whole bunch of goofy moves. Their finishes is Trey going for a standing SSP and Dez throwing him so he can actually hit the guy, so it’s cool-looking, but goofy as hell in theory.

Kiera Hogan talks about Allie and then we go to the nuthouse with Eddie and Alisha. The doctor leads Alisha out before Moose comes in and says he was family. He goes to read him the Eddie Edwards Story – which leaves out the part where Eddie turned on Moose, and when Alisha left him. Eli yammers on about Tommy Dreamer and says he’ll bury him tonight. Ethan Page and Matt Sydal talk about Ultimate X before Eli Drake comes out to face Tommy Dreamer in the main event of a TV show here in 2018. Tommy does his homage to Dusty stuff early before Eli just leaves and loses by countout. Dreamer goes to the back and this is made a hardcore match. Tommy gets tossed into a trash can in the corner before eating the Gravy Train. Josh says NO ONE HAS EVER KICKED OUT OF THE GRAVY TRAIN! Eli breaks an oar over Tommy’s chair-covered face to win. Eli goes backstage and gets a birthday card and balloons – and looks scared, so I guess his feud with Abyss is continuing on.